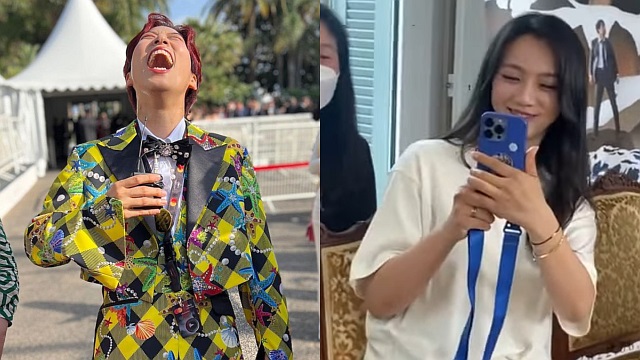 Yesterday (23rd) local time, Tang Wei took a picture of Jaejae's voluptuous appearance on his red carpet and posted it on his social media.

In Tang Wei's photo, Jaejae was wearing a yellow checkered tuxedo with his head tilted back and smiling broadly.

Perhaps because of that, Jaejae appeared on this day wearing her jacket with colorful starfish and seashells painted on it and bootcut trousers like an hourglass, as if it had just moved her sea.

After confirming that Jaejae's photo was uploaded to Tang Wei's SNS, the 'Civilization Express' team shared the photo on the official SNS, mentioning "Human SpongeBob stuffed in Tang Wei's feed."

Jaejae also shared a photo on his personal SNS and wrote, "I love you, Tang Wei's older sister."

Jaejae and the 'Civilization Express' team previously interviewed director Park Chan-wook, actors Park Hae-il and Tang Wei, who directed the movie 'Decision to break up', which was invited to this year's Cannes Film Festival competition section.

In her live broadcast before her interview, Tang Wei marveled at her wealth and her 'Civilization Express' live broadcast, and even took a commemorative photo of her with her camera during her broadcast.

'Decision to break up' is a movie about a detective 'Hae-Jun (Park Hae-Il)', who is investigating a murder case in a mountain, meets 'Seo-Rae (Tang Wei)', the wife of the deceased, and begins with suspicion and interest at the same time.

'Civilization Express' is scheduled to interview the two Korean films 'Decision to break up' and 'The Broker' team, which competed in this year's Cannes Film Festival, one after another.