[Exploring China] Millennium Shandong cuisine throws away "tired": when there is more, there are few tricks

China News Agency, Jinan, May 24th telegram: Millennium Shandong cuisine throws "tired": when there is more, there are few tricks   China News Agency reporter Zhao Xiao   Remove the fascia from the chicken breast, cut into shreds along the grain, season with onion and ginger water, and cut a handful of chrysanthemum. Heat up a pot, put cool oil, cook on low heat to get the aroma of onion, ging 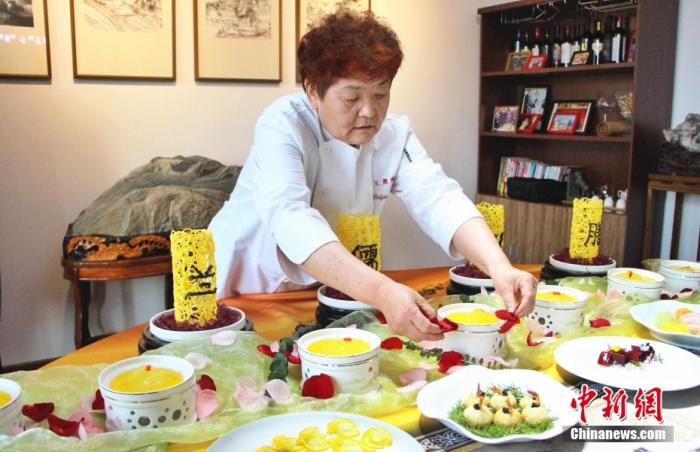 China News Agency, Jinan, May 24th telegram: Millennium Shandong cuisine throws "tired": when there is more, there are few tricks

Remove the fascia from the chicken breast, cut into shreds along the grain, season with onion and ginger water, and cut a handful of chrysanthemum.

Heat up a pot, put cool oil, cook on low heat to get the aroma of onion, ginger and garlic, add green chrysanthemum and snow-white chicken, and the aroma overflows from the pot.

"As an important branch of Shandong cuisine for thousands of years, Confucius cuisine is deeply influenced by Confucius' idea of ​​advocating scientific diet." Wang Xinglan said that Confucius proposed "not eating from time to time", and the diet should be seasonal and seasonal.

Taking the traditional famous dish of Confucius "Fairy Duck" as an example, Wang Xinglan said, "In order to keep the cooking time accurate, this dish is 'timed when the incense is inserted, and the duck is cooked thoroughly', and the cooking process is extremely fine."

Legend has it that when Kong Fanpo, the 74th generation grandson of Confucius, was the prefect of Tongzhou, Shanxi, his chef cooked a "raw steamed whole duck". The meat was rotten and delicious, and it was fat but not greasy.

Kong Fanpo was full of praise after eating it, and even called it "fairy duck".

As the first of the eight major cuisines in China, Shandong cuisine originated in the Spring and Autumn Period and developed to its peak in the Ming and Qing Dynasties. However, in the 1980s and 1990s, it was once evaluated by the outside world as "dark, oily and salty".

In order to meet the needs of refined "foodies" after the upgrade of catering consumption, many Shandong cuisine masters have improved and innovated Shandong cuisine in combination with traditional Chinese medicine health preservation, and promoted its transformation to light salt and low oil.

"We also make soup with fresh mushrooms such as Morchella, Galleria vulgaris, and red pine mushrooms with old chickens. Under the guidance of traditional Chinese medicine, we add Chinese herbs such as liver-protecting herbs in appropriate amounts to make healthy soup."

According to Yan Weixing, the master of Chinese Shandong cuisine and the inheritor of Yanjia cuisine, Shandong cuisine is infiltrated with Confucian culture and the traditional food thinking of the Central Plains. , pay attention to peace and moderation, harmony of five flavors.

Yan Weixing said that traditional Shandong cuisine is good at seasoning with soup. According to the characteristics of raw materials and ingredients, appropriate cooking techniques are selected, so as not to destroy the nutrients of the ingredients themselves, and to retain the best taste.

"The dishes are crisp, savory, or tender, without losing their authenticity."

"Nowadays, many people like to increase the process of cooking, frying, rolling, roasting, and putting more than 10 kinds of condiments at the same time." Yan Weixing said that the techniques are fancy, and what they eat is not healthy vegetables, but "junk food".

In contrast, Shandong cuisine loves to do "subtraction" in cooking skills, such as soft-boiled fish fillets and oil-fried double-crisp.

One or two techniques, you can get a dish.

Zhang Jianxin, deputy director of the Department of Traditional Chinese Medicine of the Second Hospital of Shandong University, believes that traditional Chinese medicine has a saying that medicine and food are the same since ancient times.

Adapting measures to the times requires people to eat in accordance with the natural rhythm, which also reflects the Chinese philosophy of "harmony between man and nature".

"Chinese diet integrates humanities and health care. In the context of building a 'healthy China', diet therapy and health care medicated meals will usher in a broader market in the future." (End)