“The picture became clear, and the coverage disappeared, Shireen Abu Aqleh, the word that never dies, for your soul is peace.” In Jenin camp in the northern West Bank, specifically its western entrance, next to the schools of the United Nations Relief and Works Agency for Palestine Refugees “UNRWA,” she wrote this letter, along with other messages, And bouquets of flowers, surrounded 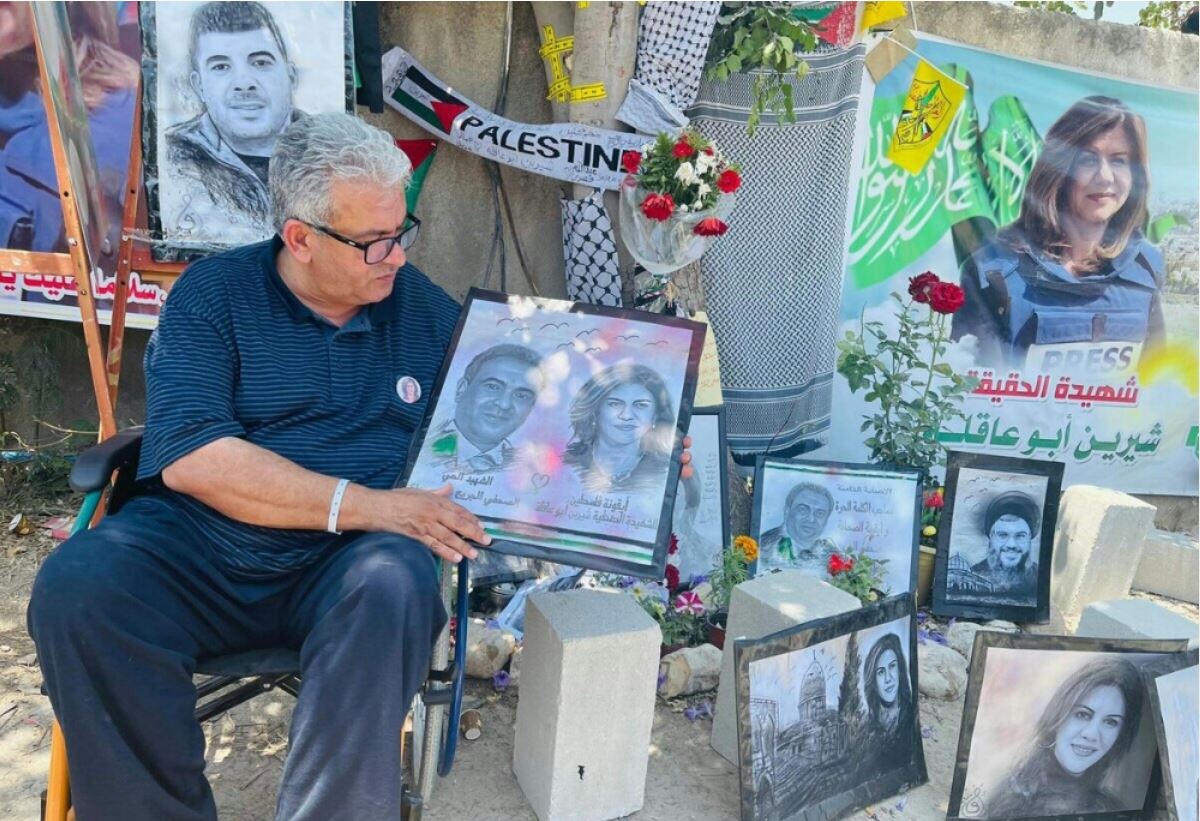 “The picture became clear, and the coverage disappeared, Shireen Abu Aqleh, the word that never dies, for your soul is peace.” In Jenin camp in the northern West Bank, specifically its western entrance, next to the schools of the United Nations Relief and Works Agency for Palestine Refugees “UNRWA,” she wrote this letter, along with other messages, Bouquets of flowers surrounded dozens of paintings sprawling right and left, which attracted far and wide in Palestine, to be witnesses to the assassination of the Voice of Truth, who came to Jenin to document the pain of defenseless Palestinians under the sizzling bullets of the occupier.

Under the shade of the tree on which the Al-Jazeera correspondent leaned in the Palestinian territories, to save herself from shooting, where the scene of the assassination of the Israeli army soldiers, there are scattered paintings of plastic art that brought together the Palestinian issues and their events with the journey of the martyred Palestinian journalist Shireen Abu Akleh.

“The Icon of the Palestinian Press,” the name given by the Palestinian artist Fida Samar, a resident of the Jenin refugee camp, to the art exhibition that she held specifically at the site of her assassination, in honor of Abu Aqila and her journalistic struggle.

"Emirates Today" visited the "Icon of the Palestinian Press" exhibition, which was inaugurated by the artist Fidaa Al-Sammar on Thursday, May 19, in the presence of the governor of Jenin, official and media figures, amid crowds that came in solidarity with Abu Aqila, and in honor of her prominent role in conveying their suffering.

And the "press icon" embraces paintings and artworks that the artist designed the collection with both hands, all of which express the Palestinian memory, the struggle with the occupation, the hope for freedom and return to the homeland, and artistic paintings of the city of Jerusalem, and the martyr Palestinian President Yasser Arafat, in addition to artistic images of the national struggle and the martyrs. And prisoners, and others that reflect the struggle and sacrifices of women, and paintings of the martyr Abu Aqleh, according to Al-Sammar.

She points out that the exhibition also includes paintings embodying Sherine's work as a journalist working to convey the truth and expose the barbaric practices of the occupation against the Palestinians, as well as paintings of the martyrs and prisoners of Palestine, and the catastrophe of the displacement of its people.

The artist says, "Sherine Abu Aqleh's weapon was the picture and the pen to repel the injustice of the Israeli occupation against all the Palestinian people, and the feather and pen are the weapon in which he embodies the crime of spilling the blood of Abu Aqleh, the wounds of the journalist Ali Al-Samoudi, and the pains and calamities of the Palestinian people's displacement, and this is a covenant and loyalty." All of them have to liberate our lands and our holy sites from the impurity of the occupation.”

Al-Samar continues by saying, “The idea for the Press Icon exhibition came right after the occupation deliberately committed the crime of assassinating journalist Abu Aqila, and wounding Palestinian journalist Ali Al-Samudi. So if the occupation killed the voice of truth, we came here to renew the covenant of loyalty, with those who perished in order to support our people as martyrs. We will embody that with the feather and the pen as long as we live.”

By organizing her art exhibition inside the site of the assassination of the icon of the Palestinian press, the artist Al-Sammar embodied the solidarity of Palestinians from all groups and segments with their cause, and their people who sacrifice the most precious and precious to provide for them in the face of the occupation’s arbitrary attacks, and the disclosure of its criminal practices. From all sides.

Coverage is not over

While Al-Samar wanders among her paintings accompanied by visitors, the Palestinian journalist Ali Al-Samudi, who was injured, accompanied by Abu Aqleh, sits in a wheelchair, carrying pictures of Shireen Abu Aqleh, which was planned by the plastic artist after his assassination.

Journalist Al-Samoudi says, “Through this exhibition, we carry a message that the occupation must realize its content well. Shireen, who was assassinated a few meters away from the place where she hit me, said the occupation was shot by her machine guns.

It shows that the exhibition of the artist, Fida Al-Sammar, and all the paintings drawn by Palestinian artists at the site of the assassination of Abu Aqila, assert that the pen, the picture, the camera, and the pen are all one means, which collectively support the cause of our Palestinian people, and expose the crimes of the occupation against them.

And it is not only the “press icon” who decorated the site of Abu Aqila’s assassination, and turned it into a permanent art exhibition available to everyone who came to Jenin camp. On the wall adjacent to the site of Abu Aqleh’s martyrdom, dozens of Palestinian plastic artists wrote paintings embodying Abu Aqila’s journey over many years. Until the day she was assassinated by the occupation forces, and her funeral procession was intercepted.

While the Palestinians called the entrance to the western Jenin camp “Shirin Abu Aqila Street,” where the place of the assassination and her martyrdom is, in appreciation of the process of conveying the truth, which Abu Aqleh led over a period of 25 years.