Nuria Freire, the former English teacher who sews shirts as they sweep Instagram: "Size labels seem violent to me"

The sincerity of Nuria Freire, alma mater of Cléa Studio, is as long as the black hair that she moves over and over again on Instagram. But beware, because she does not do it with an intention... 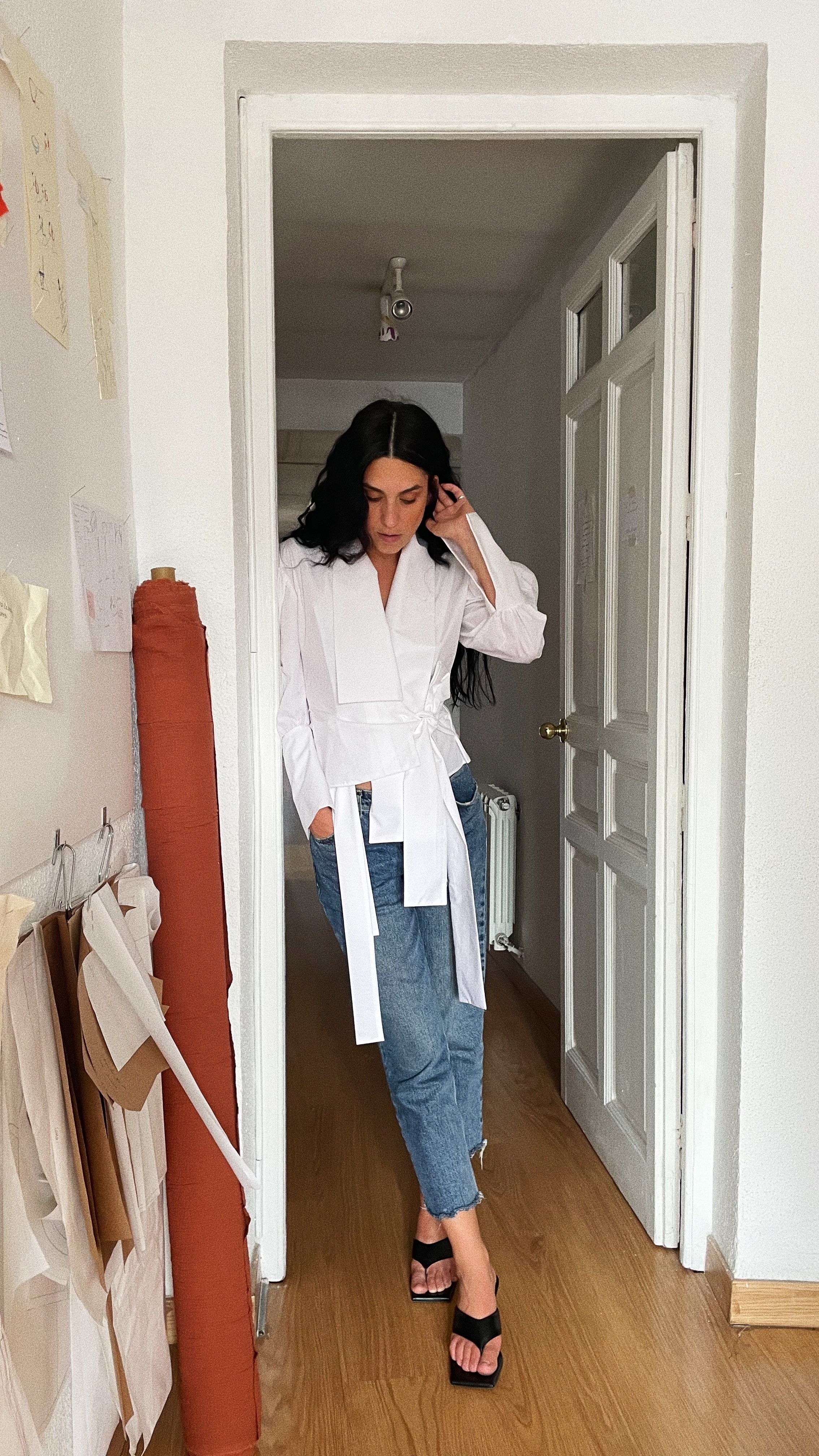 is as long as the black hair that she moves over and over again on Instagram.

But beware, because she does not do it with an intention, but with the greatest naturalness in the world.

She moves as she speaks, which is also how she writes, something that her community confirms week after week with its De Ella

letter, as she prefers to call it: "They are my

that serves as educational and inspiring content for the readers.

They are the conversation that you would have with me

if you came to the workshop / house. So they are

, since nobody changes for the better without a little discomfort." That, thankfully, is not a word that defines the clothes that come out of his hands.

As soon as a review of its website or its Instagram profile has been made, it will have been verified that there inhabit a concatenation of

blouses and dresses in which volume

is the most visible feature, but not the only one: they are full of details. and yes, also of passion.

"I sewed a shirt to play and said 'God, what a pleasure!'

The cotton, its volume, how comfortable it is to work with... ", she recalls how she fell in love with that piece that has become her 'leitmotif'.

I also make pants, but I don't have the time to show everything I do publicly". Or what is the same: let's not believe that because he is not on social networks, he does not exist, although he is one of those people who grant him the being able to live from what you love and that, in addition, people connect with your project.

Its bases are as clear as the letters it sends every Friday: tailor-made sewing to enjoy.

"It is being present for people, saying without words 'I care about you'

and not producing things that are not going to sit well," he explains about his job.

However, he admits that he does not rule out productions that are a little more standardized "on a small scale to grow", only with very specific conditions.

"When I have studied a design well, I will put its sizes, although for me it is difficult, since

the size labels seem violent to me: it is like wanting to force someone to enter them instead of creating something for their bodies

Not surprisingly, Freire shares in her personal profile that her brand is her "excuse for going half naked and saying I'm dressed."

When you ask her about the look she would wear for the rest of her life, the theme comes up again: "The Camila dress is like going naked."

That's why she's also not surprised that the person she hasn't dressed yet but would love to is Rihanna.

We refer to her pregnancy.

Although right now Freire shares a very honest happiness ("everything that is a lie is toxic; if you share happiness, let it not be because you have to maintain an image"), the road to setting up a brand from which to live has not been easy.

"My lack of privilege, which for a long time I used to immobilize

my parents did not support me to study design, neither financially nor morally.

The money existed, they just didn't think I was going to be able to live on this, so if I wanted it, I paid for my studies, rent and food.

Although the money is the least of it, what hurts the most is seeing the doubt and lack of confidence in you on their faces". However, with "a lot of crying and a lot of anxiety", he went ahead and got it, taking with him "a master's degree in entrepreneurship and impressive personal development" due to the stubbornness that, she admits, her parents did give her.

"Cléa is the greatest sign of love for myself,

because she believes her even when I also silently doubted myself, which I never told them I confirmed for obvious reasons."

These experiences make Nuria carry the "if you want, you can" flag.

"We're too enamored with our excuses,"

"I'm lazy. I'm not very creative. I don't have money. My boss doesn't like me. Instead of asking ourselves, how do I make the life I want possible?, we say to ourselves, why don't I have the life I want?, by way of complaint and without any type of action that brings us closer to change".

Change is precisely what you see and not, in a 50/50, in generation Z: although many of them are becoming aware of the need to transform habits and customs, many others do not, hence phenomena such as behemoth that

is continue to function and affect, in one way or another, businesses like Nuria's.

"He is a monster who moves the masses like puppets,

and the only thing he says to people is 'you are poor but don't worry, I'll let you appear financially solvent'", he maintains emphatically.

The dilemma of fast fashion has been almost daily for some time in certain sectors;

"On a particular level, within an awakened collective, it is fighting," he says.

governments have to get involved here, and really.

And it shouldn't be an ideal to eliminate it, it should be a reality, now.

Don't sell me trash that breaks, I want my babies to enjoy the planet, not a dump

Some have learned to do 'green washing' and to go enlightened,

and others do the right thing to the detriment of creating instant wealth," he continues.

, in fashion there is a lack of camaraderie and there is plenty of envy".

there are a lot of people who sew, a few things that are wonderful.

But there are people who still love sewing and who know that it is an art."

What is also an art is

, which he has done every morning since

("it is as important as brushing your teeth; you have to clean negative thoughts and put the ones that feel good").

Or being able to make

a shirt cut in one piece,

as is the case with the Rose model by Cléa Studio.

Because although the techniques have been refined and matured, in this Madrid workshop where the shirts that are now sweeping Instagram are born, the same person who ran in front of the television when his grandfather warned with a