Xandra Luque, 'queen' of salad and head chef at a hospital: "In their last days, many patients ask for dishes that remind them of their childhood"

Xandra Luque (Madrid, 33 years old) is young, a woman and head chef since her twenties. She has been dedicated to gastronomy for 14 years but her name came to the fore a few months ago, ... 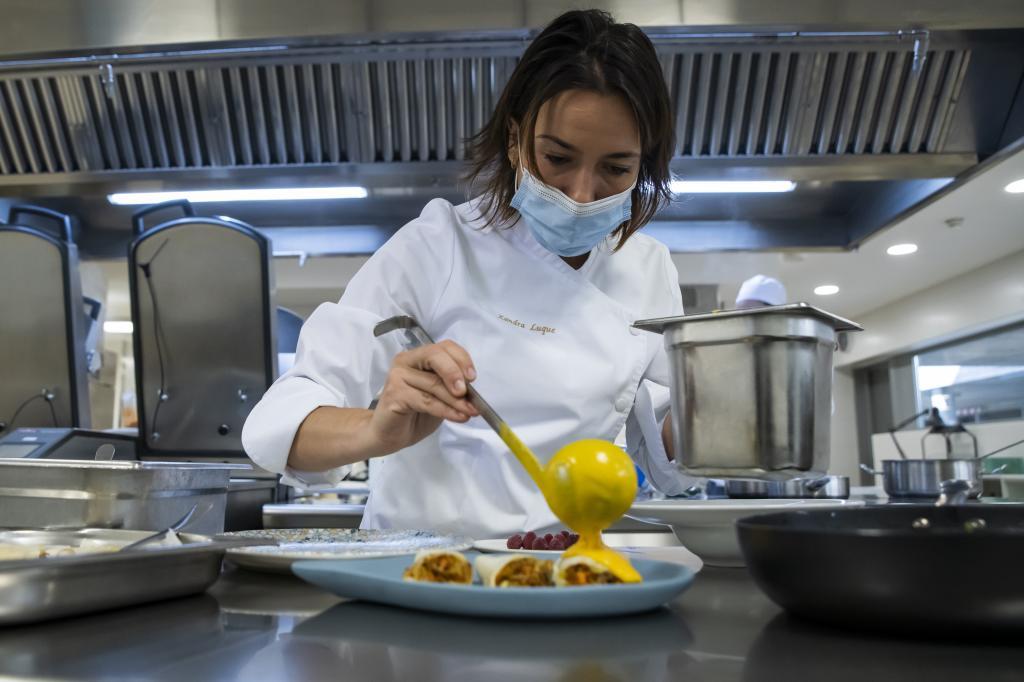 Xandra Luque (Madrid, 33 years old) is young, a woman and head chef since her twenties.

She has been dedicated to gastronomy for 14 years but her name came to the fore a few months ago, when she won the Russian salad contest of the Association of Cooks and Pastry Chefs of Madrid (ACYRE Madrid).

We quickly asked what her recipe contains, with the hope of replicating it and abandoning that urgent practice of opening the freezer and mixing a bag of 'things' with mayonnaise from a jar.

With the resulting artifact we may solve a problem badly, but it doesn't seem like we're going to win prizes...

award- winning salad is this: "It is made with a lot of love and work. It has poached potatoes, marinated tuna with apple vinegar, natural vegetables, black pepper, bay leaf, fresh peas, mayonnaise emulsified with extra virgin olive oil, a spherification of manzanilla olives... The whole bite together is very unctuous", says Xandra.

And our suspicions are confirmed: no canned tuna, no canned peas,

no bags of frozen food

, or witticisms, such as prawns ("everything is being added to the salad and it has what it has").

Luque acknowledges that, wherever he goes, he always asks for it: he considers this dish a reliable thermometer of the quality of a kitchen and it makes him "very angry" to find excesses such as a hard potato or a regular mayonnaise.

Everything is being added to the salad, even prawns, and it has what it has

Xandra Luque studied the Higher Level Training Cycle in Restoration and also another in Dietetics and Nutrition.

She now also wants to delve into this field and is studying at the university.

After an internship, she was the

, owned by the 'starred' Mario Sandoval, and from there she has been on the famous Ponzano street in Madrid, in hotels... "Until four years ago they offered me to come to the Navarra University Clinic. It was a turning point in my career," he says.

There she has created 987 dishes and there she is responsible for the menu served to hospital patients, made up of five starters, five main courses and five desserts.

"When I won the award, we had to play it daily because

What is special about cooking in a hospital? In a restaurant you want to please whoever goes there, but here people are forced to be.

Therefore, I seek to improve their daily routine and create experiences through my recipes.

In Spain we like to eat, it is something cultural, and with careful dishes, adapted to different diets and

patients do not feel sick

and feel cared for.

If you are a professional, it does not matter where you are, in a hospital, in a school, or in a Michelin star.

That is my philosophy.

I am very demanding with myself, with my dishes and with my team.

The result always has to be perfect. What situations have you experienced here? There are some very tough ones.

That's why I think a lot about patients when I create a dish.

When they are in their last days, many ask for

dishes that remind them of their childhood

, of what they lived in their house.

They asked us for a roscón de Reyes in June or a child who was very sick wanted some Foster's-type ribs [Foster's Hollywood].

We did it, of course.

It is a huge reward to make people happy through cooking in such difficult times.

We receive many thanks and they tell us that the

Sometimes I go up to the floor to talk directly with them and that way I take care of what they need.

It is always said that you eat fatal in hospitals.

Do you know it from a good source? Luckily I've never been hospitalized, but it's true that we always hear that people eat badly in communities.

I don't think it's on purpose, but there is no culture that cooking has to be part of the treatment, on a psychological level and on a taste level.

I want to bring

haute cuisine to the menus of a hospital.

But, is it possible to cook rich without salt, for example? In a hospital there are diets low in salt or even without it, and yes, you can eat well.

With thyme, rosemary, pepper and other spices you can flavor a dish.

We also cook at a low temperature and this enhances the basic flavor of the product.

We have to try that if we put chicken, it tastes like chicken.

Sometimes we add too much salt.

His job is very demanding, they say. I have lost everything in my personal life.

I haven't been to communions, birthdays, weddings... It doesn't even cross your mind if you have a complicated service to give, like feeding a thousand people.

My family has always supported me, but what you lose, you don't get back.

That does make me sad, but work is part of my life, it doesn't end at a specific time.

also missed being in clubs when I was

I have gone out, yes, but the next day I was always the one who had to work and I was dragging bags under my

I love what I do.

In fact, in the hospital I thought that my rhythm would be different, but in the end I am a gastronomic consultant, I participate in 'showcookings', I make video recipes, some catering when I can... I'm always busy.

Has being a woman and a young person brought you problems in the kitchen? I would like to say no, but I have had them.

I've been a chef in my early twenties and I've always had people twice my age.

men of 50 have resisted

and I have had to make myself respected through my work: showing that my dishes work and my way of directing, too.

The figure of women in the kitchen is not valued as it should and it is a shame.

We have to sell a lot of dishes, convince... In kitchens, I am in favor of mixed teams, because we each have our qualities. Have television programs helped your sector? Gastronomy is fashionable and they have served to talk about cooking, but sometimes the effort behind it has been devalued.

do a lot of washing

up before being a chef.

How are we doing in Spain gastronomically? In general, all of Spain has excellent gastronomy, but

Madrid is a world benchmark

There are places that are amazing and in any neighborhood.

Is it possible to eat well with a menu of the day for 10-12 euros? Of course.

At the El Bedel hotel in Alcalá de Henares, with 11 euros we made a phenomenal menu, with pickled partridge, Iberian cheeks... Just as another

200-euro menu doesn't have to be expensive.

Do you know the research and the drawings that Dabiz Muñoz may have done for a single plate?

Sometimes we hear that 'I ate a tasting menu and then I had to go to the burger' and it makes me very sad because what is behind is not always valued.