Jay Chou's abdominal muscles are gone, and my youth is gone

China News Entertainment, Beijing, May 21 (Reporter Ren Siyu) On the evening of May 20, Jay Chou's concert was re-screened on social networks.   "Dragon Fist", "All the Way to the North", "The Secret That Can't Be Said", "Nunchuan"... 23 songs, did you sing along?   Even if it's just a re-screening of the concert 9 years ago, even if he hasn't released a new album for 6 years, even if he doesn 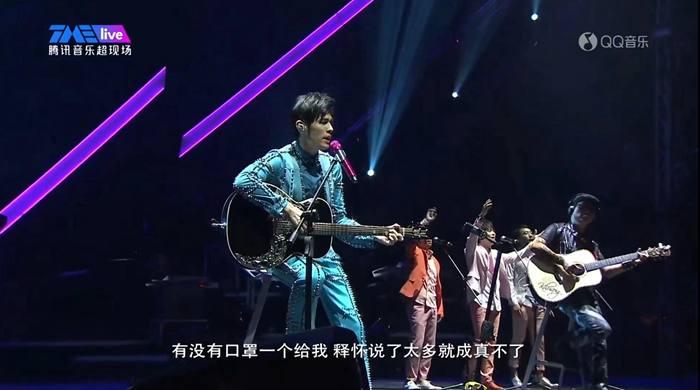 China News Entertainment, Beijing, May 21 (Reporter Ren Siyu) On the evening of May 20, Jay Chou's concert was re-screened on social networks.

Even if it's just a re-screening of the concert 9 years ago, even if he hasn't released a new album for 6 years, even if he doesn't do anything, he can still easily dominate the hot search. "I want to go back to the past", "my youth".

As netizens said: "No way, who called him Jay Chou."

The re-screening of the concert on the evening of May 20th may bring you the first impact not music, but visual:

A cool blue-light spiral aircraft descended on the stage. Jay Chou appeared in a carved bronze armor suit. In the music of "Exclamation Mark", his strong 8-pack abs (limited edition) was revealed.

At the end of the year before the concert, Jay Chou released his 12th album "Twelve New Works" in the 12 years since his debut. In order to achieve the perfect figure he required, he brought in his good friend Liu Genghong and others to help with fitness and lost weight. 8 kg.

"Brother is not training muscles, it's perseverance!" Jay Chou always said that at that time, he wanted to tell everyone that he was changing, "You can practice until you are 20 at the age of 30. The representative said that my music is still not missing."

At that time, the cumulative sales figures for his albums had reached 24 million.

In 2013, Jay Chou was quite busy. While promoting his new album, he also released his second self-directed and acted film "Rooftop Love", which later became the first song and dance film in Chinese film history with a box office of over 100 million.

"As long as it is the field I want to be involved in, I strive to do my best. This is the real me." Jay Chou said.

In 2013, his "Magic Tianlun" world tour set sail from Shanghai, with a total of 76 tours around the world.

For some fans, it was also the first Jay Chou concert they watched in their life.

"After singing the last song, the audience turned on the lights, but the audience shouted 'Jay Chou'! A few minutes later, Jay Chou came out again, and when the music of "Qilixiang" sounded, I burst into tears..." Some netizens Remember.

"Who called me Jay Chou"

If the recent popular trend in the entertainment industry is "archaeology", Jay Chou is undoubtedly the top of this "archaeological tide".

"How terrible is Jay Chou's talent? How advanced can his songs be?" Such discussions appear on the Internet from time to time.

In 2000, Jay Chou's first album "Jay" was born, and his later "Fantasy" swept many awards. At that time, he stood on the podium and said:

This new generation of Chinese music has stepped onto the stage of the times in a maverick way, and his music has also become a youth declaration for a generation of young people.

Someone once shared the feeling of listening to "Qilixiang" for the first time: What is the taste of saury?

For a child who grew up in a northern inland city, it was really curious.

Jay Chou's songs have brought this "new world" feeling to many people, such as "Peninsula Iron Box", "Love in the BC", "Orcs"... Following his songs, the teenagers opened up to the outside world little by little. knowledge of the world.

If there is one word to describe his style, it may be "multiple", which combines classical, jazz, rock, folk, electronic, Chinese style and other elements to form a unique personal style.

In addition to the changeable musical styles, his works also contain many delicate emotions and humanistic concerns, such as the anti-war theme "Sorrow of the War", the anti-domestic violence theme "Dad I'm Back", and the environmental protection theme. "Ladder" and more...

Whether happy, sad, in love, or broken-hearted, in different states, everyone seems to be able to find a song that suits their mood.

Compared with this concert in 2013, the time everyone listens to Jay Chou has added nearly 10 years.

"I'm ashamed to say that, although I claim to be a die-hard Jay Chou fan, I haven't heard any of the albums after "Jay Chou's Bedside Story"." A fan joked.

When Jay Chou hasn't released any new songs for a long time, his works are still dominating the charts. Who would have guessed that the "Compendium of Materia Medica" in those years would still become the leg-crunching shuttlecock dance many years later?

After 22 years, why do you still love Jay Chou?

"My work is very busy now, and there are many stressful times, but when I listen to Jay Chou's songs, I go back to that innocent era and become much more relaxed."

On the evening of May 20th, the last song of the concert was "Sunshine Otaku". Many people wanted to dance with Liu Genghong in a conditioned reflex, "'Change direction! Side kick!'' We want to be a sunny otaku and otaku girl. ', who knows..."

In 2016, Jay Chou joked in an interview that he had gained 13 kilograms in three years of happiness, and said to himself, "but everyone can't see it."

In a blink of an eye, the sparrows outside the window have been talking a lot for more than ten years. When Liu Genghong quickly adapted one after another aerobics, even Mayday said in his New Year's wish that he hoped Jay Chou would sing...

The new album of "Ace Pigeon" seems to have only seen some new developments this year.

Recently, Fang Wenshan said on the short video platform, "When will Zhou's new album be released, I will help answer these two days..."

Teacher Wenshan, can we trust you this time?