International press review Headlines: Biden's first Asian tour, under threats from China and North Korea Audio 05:26 South Korean Foreign Minister Park Jin greets US President Joe Biden upon his arrival at the Osan military base, May 20, 2022. © AP/Evan Vucci By: Véronique Rigolet Follow 4 mins Advertisement As Joe Biden begins a 5-day tour of Asia this May 20 in Seoul which will end next we 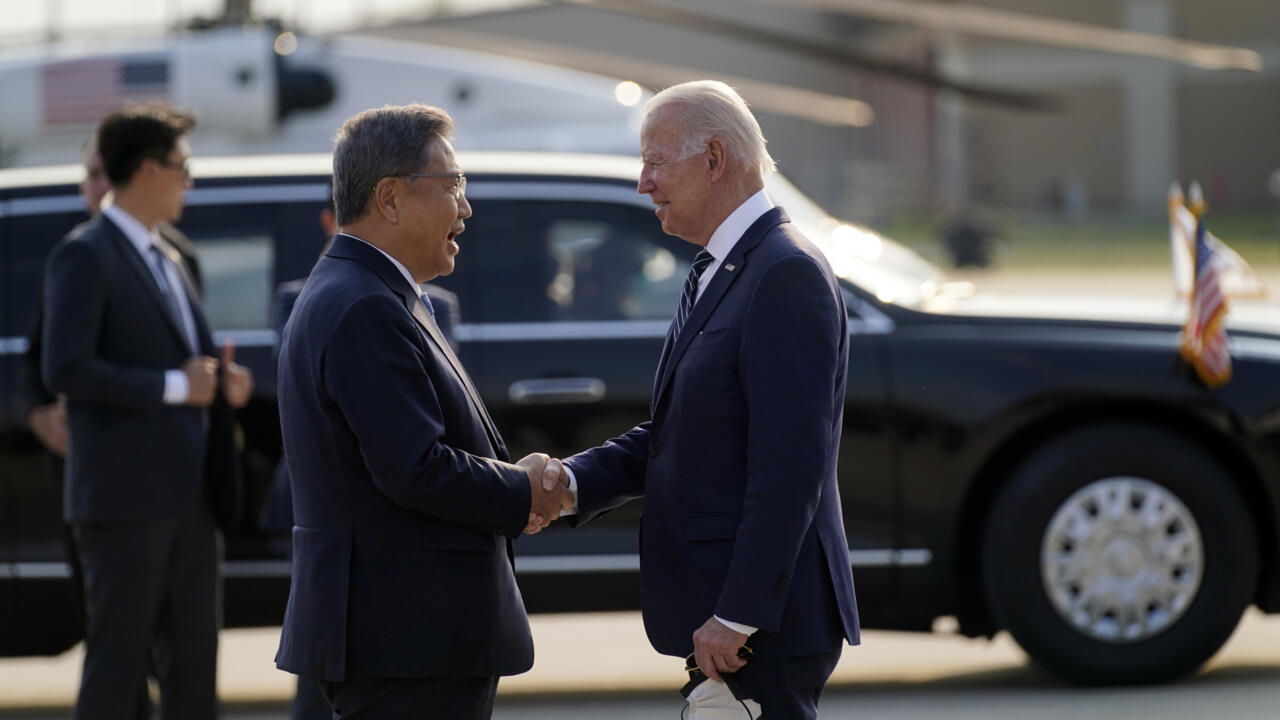 South Korean Foreign Minister Park Jin greets US President Joe Biden upon his arrival at the Osan military base, May 20, 2022. © AP/Evan Vucci

As Joe Biden begins a 5-day tour of Asia this May 20 in Seoul which will end next week in Japan, Beijing is firing red balls, denouncing "

a visit of destruction

While speculation, adds the British daily, is also intensifying "

the Asian pivot that Joe Biden intends to implement

the containment of China

with its Asian allies which are South Korea, Japan, India and Australia

Hence the fury of Beijing, which storms and threatens "

to firmly defend its fundamental interests

The Chinese nationalist daily which notably warns the United States “

against any interference in the question of Taiwan

this is China's red line: "

", hammers the editorialist of the

a major strategic error, of which it will be too late to repent

, which underlines that Moscow also accuses "

", and this after the United Nations asked Russia "

43 countries are on the brink of starvation

", while grain exports from Ukraine are reduced "

" of what they were before the war.

Not enough to move Russia, which cynically criticizes the West "

The Taliban are now going after female Afghan TV presenters

9 months after regaining power in Kabul, the Taliban “

ordered female TV presenters to cover their faces on air

A final and non-negotiable order

” from the Ministry of Virtue and Morals, further underlines the British daily which describes how several presenters and presenters “

A woman is being erased

by order of the Ministry of Virtue

A hard line from the Taliban which confirms "

, while at the beginning of the month already "

they ordered all women to wear the burqa in space public

Should we be worried about the monkeypox epidemic?

All the daily newspapers are wondering today when "

several dozen suspected or confirmed cases of Monkeypox, monkey pox, have been detected since the beginning of the month in several European countries and in North America

A rare and generally mild disease

”, tries to reassure the

resemble those of the flu with lesions, swollen pustules on the body

, which encourages its readers “

to be careful in sexual relations

In Spain where 7 cases have already been detected "

Great Britain is also starting to “