The European Broadcasting Union (UER) -(EBU, for its acronym in English)- has confirmed the final classification of the 40 participants in the Eurovision Song Contest, after... 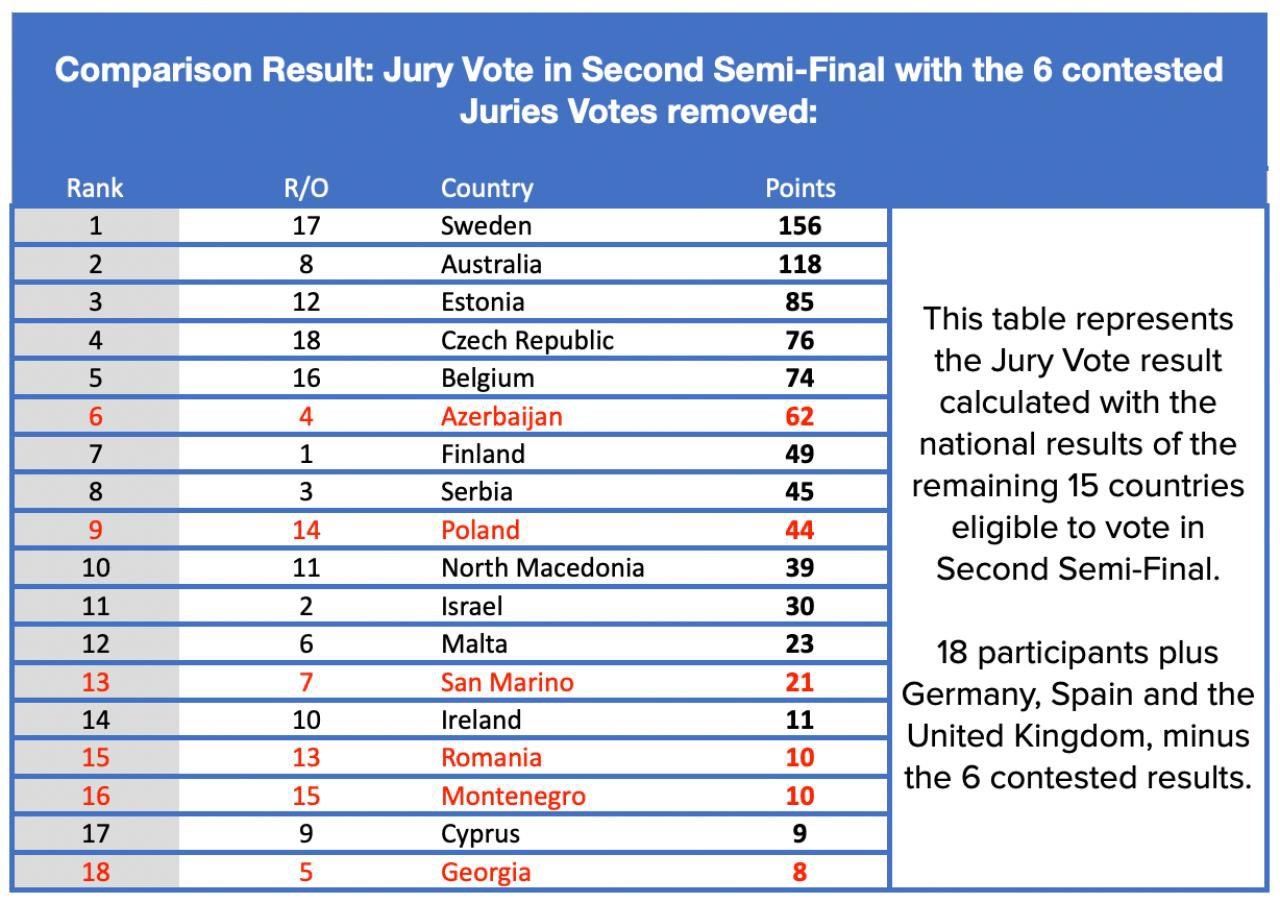 (UER) -(EBU, for its acronym in English)- has confirmed the final classification of the 40 participants in the

, after its investigation into the irregularities detected in the voting of six countries.

in second and the victory remains for

The organizer of the contest has explained that this year's contest was "a great success in bringing together hundreds of millions of people around the world in unity and celebration", but as reported on Saturday May 14, the independent pan-European voting partner of the

Result of the investigation of the UER.UER

integrity of the vote

, both by the national juries of each country and by the viewers who vote by phone or SMS, is essential for the success of the program", he stated, while adding that it is the duty of the EBU guarantee a valid result.

"Consequently, any breach of the rules is taken very seriously," she said.

In this sense, the entity has reported that, in the second semifinal, it was observed that four of the six juries

placed five of the other countries in their Top Five

, taking into account that they could not vote for themselves.

, a jury voted for the same five countries in their Top 6;

The pattern in question, as he has clarified, was detected as irregular by

, since five of these six countries were classified outside the Top 8 by the juries of the other 15 countries that voted in the same semi-final, which included three of the

Germany, Spain and the United Kingdom

Additionally, four of the six countries qualified in the bottom 6 of the other 15 countries that voted in this

"An irregularity in the jury's voting pattern of such

" the EBU has declared.

According to the votes of the second semi-final,

In the case of the Montenegrin

their six best positions went to

gave the top five places to

, and placed Georgia in seventh place in the ranking.

San Marino, Poland, Montenegro, Azerbaijan and Georgia were the top five for the

You have the right to remove votes

In this way, the organizing entity of the contest has informed that, as established

by the Eurovision Rules

and the official voting instructions, if the votes of the national juries present irregular voting patterns (as detected by

and recognized by the

), the executive supervisor of the

"has the right to remove" the votes and "replace them with an automatically calculated substitute aggregate result to determine the final result of these countries in the second semi-final".

, the EBU did so "to preserve the integrity of the voting system" and "given the unprecedented nature" of the irregularity detected in the second semifinal.

, the board of directors of the contest and the deputy director general of the EBU in accordance with the requirements of the Voting Instructions of the Contest", he confirmed, later adding which has since discussed jury patterns with the relevant broadcasters and given them the opportunity to further investigate jury voting in their countries.

The EBU reconfirms its decision to replace the jury votes from these six countries with a substitute aggregate result in both the second semi-final and the grand final, as well as the final ranking of the 40 entrants in the

"The EBU, its members and the Reference Group will continue to work closely together to safeguard the integrity and success of an event that has been a unique platform for creative talent for 66 years and looks forward to continuing to entertain audiences around the world." concluded.