From "post-60s" to "post-90s", those college students who entered the factory

From the post-60s to the post-90s, those college students who entered the factory   [Reported by China News reporter Liu Jun] Entering May, the graduation season is just around the corner. According to statistics from the Chinese Ministry of Education, the number of college graduates in the class of 2022 has reached a record 10.76 million, both in terms of total size and annual growth, hitting 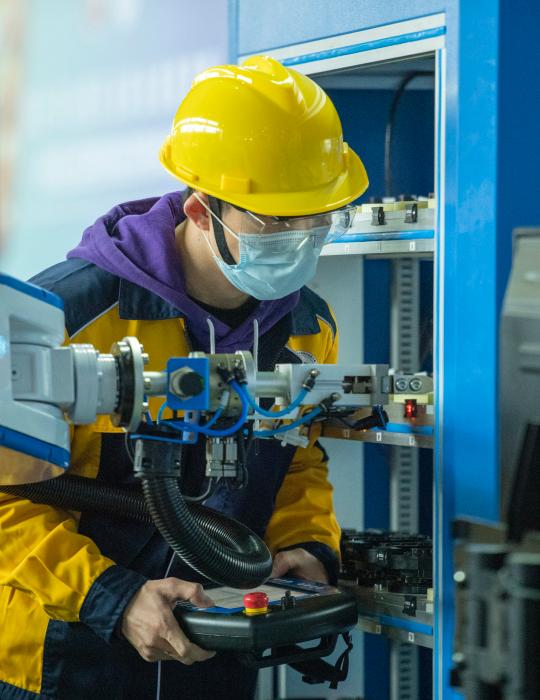 From the post-60s to the post-90s, those college students who entered the factory

[Reported by China News reporter Liu Jun] Entering May, the graduation season is just around the corner.

According to statistics from the Chinese Ministry of Education, the number of college graduates in the class of 2022 has reached a record 10.76 million, both in terms of total size and annual growth, hitting a new high in recent years.

The huge number of employed people, combined with the impact of the epidemic, gave birth to the "hardest employment season in history".

On the one hand, it is difficult for college students to find jobs; on the other hand, the "labor shortage" continues to heat up, and the news that Foxconn "robbed people" at the intersection of Zhengzhou Expressway rushed to the hot search not long ago.

However, when someone tried to draw a red line between college students and factories to solve the problem by killing two birds with one stone, it caused an uproar in public opinion. Recently, some scholars suggested that undergraduates from "double non" colleges should not mind going to the factory, which caused heated discussions.

Why are college students reluctant to enter the factory?

This question may seem simple, but in fact it is not easy to answer.

This newspaper interviewed a number of college students, employers, and college teachers who worked in factories after graduation, trying to explore the answer to the question from multiple perspectives.

On December 15, 2021, the finals of the 4th National Intelligent Manufacturing Application Technology Skills Competition kicked off in Deyang, Sichuan.

The picture shows a player in the assembly fitter competition area that day.

Taking university majors as "points", expanding to "lines" and "surfaces"

Go back 40 years, when college students were proud to be in factories.

In 1982, Xue Linghu was assigned to Xingtai Machinery Roll Group after graduating from the foundry major of Hebei Mechatronics Institute (the predecessor of Hebei University of Science and Technology). General Technician.

Since then, he has worked step by step, from workshop director to production technology section chief, to Xingji Casting Steel branch director, and now he is the chairman of Sinosteel Xingtai Machinery Roll Co., Ltd.

Xue Linghu's work history is a general epitome of the growth path of enterprise managers in that era.

He chose the latter.

"One is the high wages, and the other is that everyone thought the mobile phone manufacturing industry was quite high at the time."

Wang Ruxun's position in Motorola is a process equipment engineer. Although the work is hard, it is fortunate that there is no "three shifts" that boil people.

Since then, he has changed jobs many times, but he has never left his old line of craft equipment.

Now working as the director of the manufacturing center of a central enterprise, he looked back at his original choice and said in a joking tone: "Maybe I should have entered a research institute, a cup of tea, a cigarette, and a newspaper for a long time."

He graduated from Hebei University of Science and Technology in 2009, majoring in metal materials, and joined the Fuqing Nuclear Power Project Supervision Department under China National Nuclear Corporation. work in".

At that time, Zhang Guoli's salary and bonus added up to about 7,000 yuan per month, "a little higher than the average salary at that time".

However, the work place is too far from home, and he still wants to work in the northern city.

Fortunately, he participated in the procurement and acceptance of welding materials when he was working on the site of the nuclear power plant, and Huadian Technology, a subsidiary of China Huadian Group, was recruiting procurement managers for thermal power equipment. Zhang Guoli's experience in material procurement management is what they value. .

Since then, he has transformed into process design through an on-the-job postgraduate study.

In recent years, central enterprises have strengthened the construction of clean government. Zhang Guoli joined the discipline inspection and supervision team of Huadian Group because he understands both business procurement and technical operations.

Zhang Guoli believes that his career path has an invisible context, "A person's development is always from point to line and then to surface, it is best to take the university major as the point, and linearly expand upstream and downstream or adjacent processes, and finally rise to the comprehensive ability. Higher management positions are required.”

He introduced that in recent years, Huadian Group has selected talents to work in the headquarters many times, and all applicants are required to have grass-roots work experience and work experience in second-level units, which also proves that "only by laying a good foundation can personal development be stable and steady, otherwise It's a castle in the sky."

On February 16th, the 2022 Zhengzhou Youth Talent Spring Job Fair kicked off. Job seekers were looking for job opportunities at the job fair.

College students don't like to go to factories, it's not just about money

The "factory struggle history" of the post-60s, post-70s, and post-80s is very inspirational, but for the post-95s and post-00s, the stories of these predecessors are somewhat different.

In their view, entering the factory is more of a helpless choice.

On station B (Bilibili Video Network), an Up master shared a 7-minute video of his experience in working in the factory under the name of "21 years of undergraduate graduation and entering the factory to 'tighten screws'".

The Up master is an undergraduate majoring in product design. A foreign-funded food factory in a southern coastal city came to the school to recruit production technicians. The annual salary is 100,000 yuan, and he works for 4 days and rests for 4 days.

Nearly a year after he joined the job, he found that there were many unsatisfactory aspects of the job, such as "wearing work shoes with steel plates", "walking around in the workshop all the time, the heels were worn by the shoes, and later corns”, “night shifts are difficult, and work and rest are very irregular”, “there is not much room for improvement”, etc.

Salary, working environment, work intensity... Some special requirements of the factory may become the death point for post-95s and post-00s job seekers to veto.

The co-founder of the company said that what they need is precision testing equipment, optical materials or talents who understand a little semiconductor technology. Although the starting salary of fresh graduates is less than 10,000 yuan, they will have certain practical skills and experience after a few years of training. , the monthly salary is easily doubled, and it will also be equipped with the standard "options" of startups.

This salary level is much higher than the average income of the city where the factory is located.

However, due to the high level of precision and strict management of the working environment, employees are required to wear professional clothing, shoes and hats, and cannot bring mobile phones during work, which makes some college students who "advocate freedom" hesitate quite a bit.

"Now that the high-speed rail transportation is convenient, they may be more willing to go to the developed cities in the transportation circle to deliver food." The founder said helplessly.

After graduating from Hebei University of Science and Technology in 2008, Guo Xiangwen, who joined a Taiwan-funded foundry as a technician and is currently the general manager of Tianjin Kaixing Technology, said that at that time more than half of the students in the class chose to enter the company. "Many students came from rural areas. Can't wait to lighten the burden on the family."

Nowadays, post-00s generally have good family conditions and are not so eager for work.

"We went to a state-owned enterprise for an internship, and the conditions were very poor, but none of the students complained. Today's processing workshop is very clean and the conditions are very good, but there are still students who come to practice and say they can't stand the smell of cutting fluid. Some workshops do not allow sitting However, some have to work overtime, which is difficult for today’s young people to accept.”

Wang Chen, secretary of the student party branch of the Department of Materials Engineering at Hebei Polytechnic University, analyzed that some young people from well-off families are not suitable for the "three shifts" in the factory and feel that it is too hard. I don't want to be a blue-collar worker who makes more money.

Is it difficult to get a job?

Look at majors and self-positioning

At present, the employment intention implementation rate of this year's graduates of the School of Materials has reached 75%, and there are many well-known companies such as BOE and SMIC on the contract list.

"In the list of stuck necks listed by the state, material-related industries account for 27 items." Zhang Huimin introduced that the country has invested a lot in the materials industry in order to solve the "stuck neck" problem.

"This industry will always need people, just like an old Chinese medicine practitioner, the older he gets, the more popular he is."

In addition to undergraduate colleges, some vocational colleges are also optimistic about the employment of materials majors.

Wang Chen said that there are few steel and metallurgy colleges in China, but there are many enterprises, and the supply of students has been in short supply, so there is no need to worry about employment.

He believes that whether it is difficult for a student to find a job depends not only on the major, but also on the student's self-positioning.

At present, the groups with difficulty in finding employment mainly appear in the second and third books.

211. The students of 985 famous schools do not have to worry about it. Vocational school students are more pragmatic and hardworking, and they can also find jobs.

On the contrary, students with two or three books are not high enough.

Some students are determined to enter the state-owned enterprises, and are disdainful of small private enterprises.

At the lecture, the huge classroom was empty and there was not a single student. The scene was extremely embarrassing.

Now, the central enterprise where he works is recruiting, resumes are pouring in, and there are six or seven people competing for each position.