This is the event of this beginning of the festival: the American superstar Tom Cruise walked the red carpet in an atmosphere of jubilation to present “Top Gun: Maverick”, the sequel to the cult film that launched… 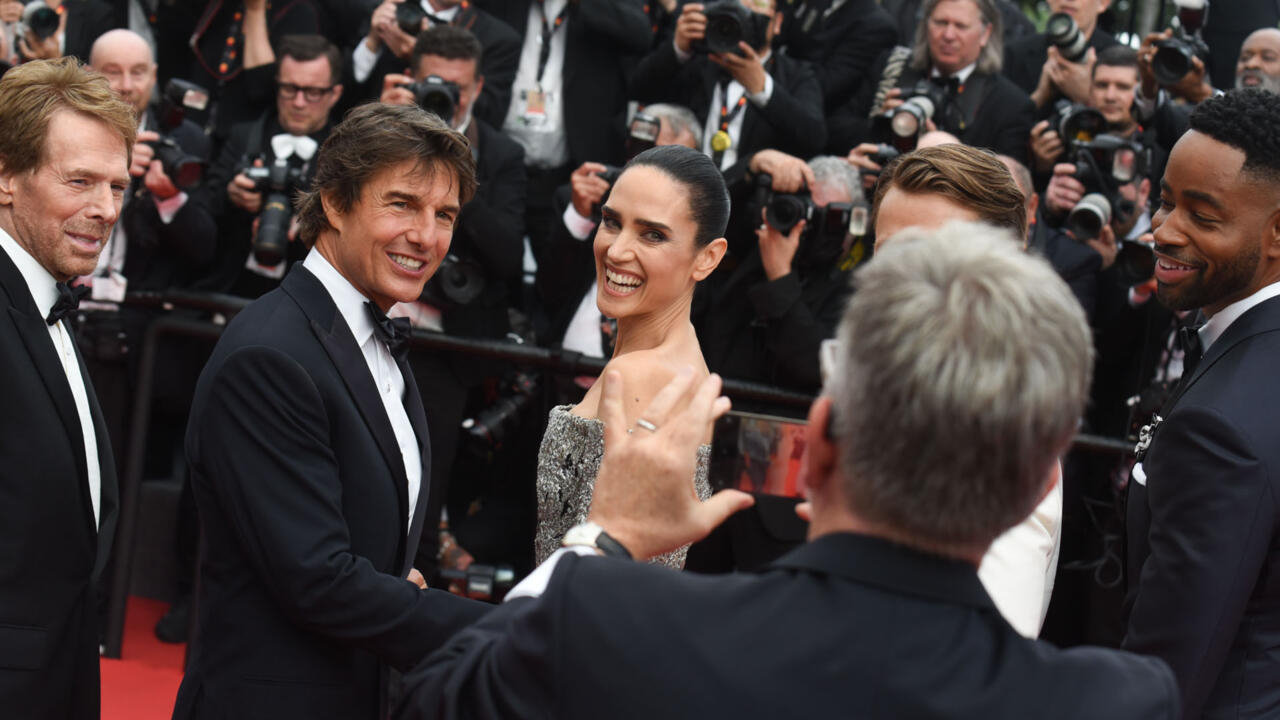 An enormous helmet three meters high sits in front of the Grand Hôtel de Cannes, by the sea. Inside, a giant screen broadcasts the trailer for “Top Gun: Maverick”, the sequel to the legendary film, on a loop. in 1986 launched one of Hollywood's finest careers.

"Tom Cruise is one of the actors in the history of cinema who, in his choices, in his projects, in his work, has the greatest success rate", greeted the director of the Cannes Film Festival, Thierry Frémaux, honored to receive the American star this year.

A visit all the more striking as she signs her big return to the Croisette, thirty years after her one and only climb of the steps, for the film "Distant Horizons", by Ron Howard, in 1992. The name of Tom Cruise, arrived the day before in Cannes, is on everyone's lips.

The sequel to "Top Gun" with Tom Cruise promoted on the Croisette in Cannes.

“A great artist, an inspiration”

At 11 a.m., in front of the Palais des Festivals, several dozen fans are already crawling, ready to do anything to approach, if only for a few seconds, their idol.

"Nothing could have stopped me from coming" launches, all smiles, Tania Lopez-Palayo, "super fan" of Tom Cruise.

The 17-year-old Grenoble girl traveled five hours with her mother the night before to be in the front row in Cannes.

Arriving at 7 a.m. behind the barriers of the Croisette, a few steps from the famous red carpet of the festival, they hope to obtain a “selfie, an autograph, to see a kiss … if only from a distance”.

Asked about her favorite films, Tania cites, unsurprisingly, “Top Gun”, which she has watched “countless times”, but also the war film “Valkyrie” (2008), the romantic melodrama “Cocktail” ( 1988) or the multi-Oscar-winning road movie "Rain Man" (1988).

“He's a great artist, an inspiration.

He embodies freedom in the choice of roles and a great respect for cinema”, comments Nathalie, her mother, sharing her daughter's enthusiasm.

Tom Cruise, a target of choice

A few meters behind Tania and Nathalie, two septuagenarians sitting on steps are sweating in the middle of the dodger.

“It's hard, but it's passion,” sighs Martine, under the amused gaze of her friend Nicole.

For almost thirty years, this Cannes resident has been tracking and photographing “all Americans” on the red carpet.

Each photo is classified, religiously, in his albums.

“The French interest me a little less, they are more dismissive.

The Americans, they sign the selfies, the photos... It's part of their job, they know that it's thanks to us that they are there”.

For Martine, today is a big day, a rare opportunity to add the "Top Gun" star to her roster.

I have George Clooney, Brad Pitt, Sharon Stone but I never had him!”

Martine, among Tom Cruise fans lining up to catch a glimpse of the Hollywood star.

At 4 p.m., the Debussy room of the palace is stormed.

Tom Cruise holds a meeting with the public there before the international premiere of "Top Gun: Maverick".

After the screening of a compilation of excerpts from his best films, the star, greeted by a double standing ovation, bowed for a long time, looking moved.

"After everything we've been through in the past two years, it's such a beautiful moment, such a great privilege to be here with you," he said in the preamble.

Asked about the growing importance of platforms, Tom Cruise posed as a defender of the seventh art.

“There is a very specific way of making cinema and I always make my films for the big screen.

I love this experience and I want others to share it too”.

The actor also explained that his choice to do his own stunts was a way to take the cinematic experience further.

If I make a dance film, I want to dance.

(...) When I did "Mission Impossible", everyone told me it was a bad idea.

But I wanted to push the art form and make it entertaining.”

Tribute from the Patrouille de France

Outside around the red carpet, the tension is at its height, to welcome the film crew.

After the rise of the steps of Omar Sy for the preview of Tirailleurs, a hubbub of voices rises.

Tom Cruise makes his appearance, walking the aisle for a long time to exchange a few words with his fans, take selfies and sign autographs.

A climb of the steps with great fanfare, marked by a double passage of the blue, white, red formation of the Patrouille de France, above the red carpet.

In the front row, Tania, the young fan of Tom Cruise did not miss a beat.

“I was able to speak with Tom Cruise, take a selfie and compliment him on his work”, she says with elation.

“He came to us with a smile, he was attentive with his fans, it was really worth it!

It was a surreal and wonderful experience”.

As soon as they climbed the stairs, Tania and her mother Nathalie packed up for Grenoble.

Five hours on the road, again, after a long day of waiting.

Tom Cruise didn't linger on the Croisette either.

Once his screening was over, the superstar took off for London, where he is expected on Thursday for a new presentation of “Top Gun: Maverick”, this time in the company of members of the British royal family.

Tania with her idol Tom Cruise, before the premiere of "Top Gun: Maverick" © David Rich / France 24