China News Service, Quanzhou, May 11 (Reporter Sun Hong) Fujian Yingliang Stone Natural History Museum announced on the 11th that when scientists conducted a detailed study of a group of dinosaur egg fossil specimens, they found the most complete scientific record so far. Hadrosaurus embryonic fossils.   "The study was jointly published by scholars from the Fujian Yingliang Stone Natural Histor 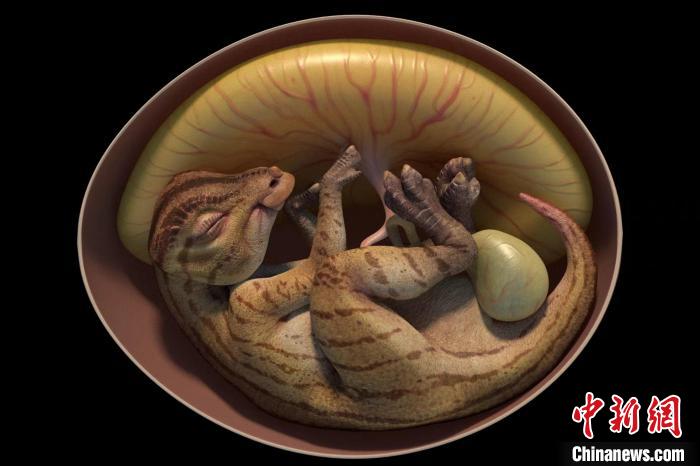 "The study was jointly published by scholars from the Fujian Yingliang Stone Natural History Museum, China University of Geosciences (Beijing), the Taiwan Museum of Natural Science and the Canadian Museum of Natural History, and was published on the 10th in the international academic journal BMC Ecology and Evolution. Niu Kecheng, director of the Fujian Yingliang Stone Natural History Museum, told Chinanews.com that this group of embryo specimens is currently being collected in the museum, and the museum calls it "Ying Baby".

It is understood that this batch of dinosaur embryos came from a batch of suspected egg fossils collected by Quanzhou stone enterprise Yingliang Group around 2000.

During the preparation for the establishment of the Fujian Yingliang Stone Natural History Museum in 2015, with the support and organization of the Fujian Provincial Bureau of Cultural Relics, the museum began to comprehensively sort out the specimens, and began to clean up some specimens with potential research value. In , a group of embryos and specially preserved egg fossils were found.

In 2019, the Xing Lida research group of China University of Geosciences (Beijing) cooperated with the Fujian Yingliang Stone Natural History Museum to start a detailed study of this batch of specimens. A series of results, such as "the most complete dinosaur embryo scientifically recorded to date" published in December 2021, etc.

According to the research, the hadrosaurus embryo fossil "Yingbei" discovered this time belongs to the strata of the late Cretaceous period in the southern Jiangxi area, which is about 72 million to 66 million year.

The egg in which the "Yingbeibei" embryo is located is an ellipsoid with a length of about 9 cm and a volume of about 660 ml. The embryonic part accounts for about 40% of the entire egg. The embryonic egg has a thin eggshell about 0.4 mm thick. It is shown that it belongs to the round egg family.

It is understood that since 1859, a large number of dinosaur egg fossils have been found in many Mesozoic strata around the world and in my country, especially in the late Cretaceous strata.

Generally speaking, dinosaur egg fossils only retain the eggshell structure, and the inner egg white and yolk have long been lost. Instead, mineral solutions have penetrated through the eggshell and filled the cavity.

Dinosaur egg fossils have various shapes such as round, oval, oval, olive and other shapes, ranging in size from quail eggs to over 50 cm in size. Only a few of these dinosaur eggs can be determined at present. Produced by dinosaurs.

The embryonic fossil of "Yingbeibei" hadrosaurus is collected in the Fujian Yingliang Stone Natural History Museum.

A very small number of dinosaur eggs also contain embryonic fossils, which are one of the rarest fossils. These fossils provide valuable information for the study of dinosaur reproductive development, behavior, evolution and paleoecology.

However, under the action of various factors, any stage of the development of dinosaur embryos may be stopped. The ossification of the early embryos is very low, and the fossils are difficult to distinguish. Only when the embryos in the dinosaur eggs reach a certain developmental stage, the researchers can It is possible to find well-preserved and easily distinguishable embryonic fossils.

Niu Kecheng introduced that hadrosaurs embryos are not the first to be discovered globally, but these new hadrosaurs are by far the best preserved of their kind.

"We can use them to answer some important questions about dinosaur development and reproduction." (End)