It took 26 hours from the discovery to the rescue of the trapped people. Why is it so difficult to rescue the site of the collapse of the self-built house in Changsha?

China News Service, Changsha, May 1 (Reporter Deng Xia, Liu Shuangshuang, Yang Huafeng) At 16:27 on May 1, the "4.29" residents' self-built house collapsed in Changsha, Hunan. A woman was successfully rescued after being trapped for 52 hours. . At this point, 26 hours have passed since rescuers found her.   At 12:24 on April 29, a resident's self-built house in Panshuwan, Jinping Community, Jin 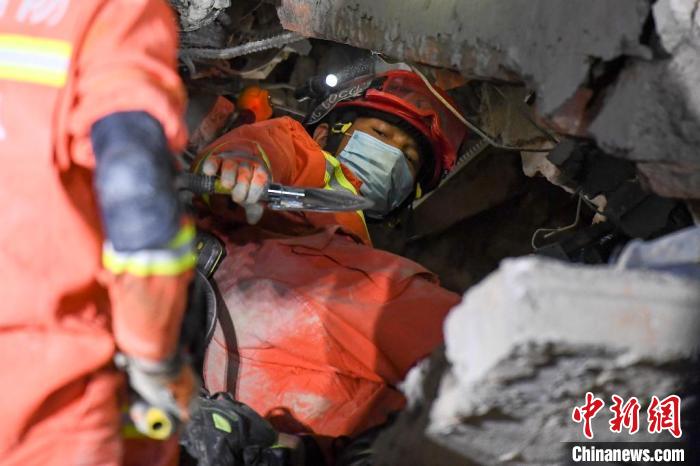 China News Service, Changsha, May 1 (Reporter Deng Xia, Liu Shuangshuang, Yang Huafeng) At 16:27 on May 1, the "4.29" residents' self-built house collapsed in Changsha, Hunan. A woman was successfully rescued after being trapped for 52 hours. .

At this point, 26 hours have passed since rescuers found her.

According to preliminary investigation, the collapsed house is a self-built house with 8 floors, of which the 1st floor is a facade, the 2nd floor is a restaurant, the 3rd floor is a screening cafe, the 4th, 5th, and 6th floors are family hotels, and the 7th and 8th floors are self-catering facilities. housing.

Tenants make structural changes to the premises to varying degrees.

According to the official announcement on April 30, the public security department initially verified 23 people trapped in the house through technical investigation and big data investigation. Another investigation showed that 39 people lost contact near the incident site.

On April 29, rescuers used a shovel to break it down.

The woman was the sixth trapped person rescued in the accident.

It took 26 hours from the time the rescuers found her to the successful rescue. Why was the rescue on the spot so difficult?

The official report said that after the accident, more than 700 fire rescue personnel, armed police officers and soldiers and social emergency forces were dispatched in Changsha, and more than 120 sets of rescue equipment such as fire trucks, large cranes, life detectors, and search and rescue dogs were mobilized to carry out on-site search and rescue. .

But judging from the rescue live broadcast, the rescue space is extremely narrow.

"Rescue is very difficult." Wen Xianghui, political commissar of Changsha Fire and Rescue Detachment, said that the collapsed building was a vertical collapse, which was stacked from top to bottom, resulting in a complicated site environment and a narrow rescue space, with a large number of prefabricated panels inside. , beams, bricks, etc.

"We can only work in the way of tunneling while reinforcing to prevent another collapse accident."

In addition, the buildings on the east and west sides of the collapsed house were impacted, and the main load-bearing components were severely damaged, which could fall to the collapsed house at any time, bringing great safety hazards to rescuers and trapped people.

After the experts of the on-site headquarters made a judgment, the China Construction Fifth Bureau provided emergency support, and dispatched professional construction personnel to reinforce the houses on both sides with quick-drying cement and steel pipes.

After the dilapidated houses on both sides were basically reinforced, fire rescuers drilled into the ruins in small groups, using small demolition pliers, angle grinders and various expansion equipment to open up rescue channels.

At about 23:00 on April 29, rescuers put a rescued trapped person into an ambulance.

The reporter saw that the rescue site was covered with wooden bars and steel bars for reinforcement.

After identifying the female trapped, rescuers opened a life channel with a diameter of about 75 cm. Only one or two people could bend over to pass through at a time, and large equipment could not enter.

"Large-scale demolition operations with large-scale equipment will cause great disturbance to the collapsed parts, and new damage will easily occur." Chen Dachuan, a professor at the School of Civil Engineering of Hunan University and deputy leader of the on-site emergency rescue expert group, said that the rescuers used On-site monitoring technology, real-time monitoring of the safety status of the houses on both sides, and temporary reinforcement of local structural components at the rescue site where trapped people are found to ensure the safety of personnel during the rescue process.

"We use manual, electric and hydraulic destruction tools to quickly open the life channel." Zhang Zheng, deputy leader of the Changsha Fire Rescue Detachment, introduced that at the scene, the fire rescue force used life detectors to carry out multiple rounds of detection of the entire collapsed building; The rescue force at the scene was divided into 4 groups, and they continued to rescue the trapped people; they continued to communicate with the trapped people, soothed their emotions, and provided them with nutrient solution in a timely manner according to the suggestions of the medical staff.

"What moved me was that the trapped people were very strong."

Through repeated searches with a variety of life detectors, rescuers have found new vital signs among the trapped people so far.

"We will spare no expense, never give up the slightest possibility, and do our best to organize rescues." Zheng Jianxin, the mayor of Changsha and the commander-in-chief of the on-site dispatch and disposal headquarters, said that Changsha will seize the 72-hour golden rescue period and try its best to search and rescue. The trapped people will spare no effort to treat the injured; adhere to scientific rescue, timely and accurately study and judge the rescue situation on the spot, dynamically adjust the rescue plan, and prevent secondary disasters.