In 2021, 60% of pharmaceutical stocks' revenue and net profit will increase, and BeiGene will become the "loss king"

Sino-Singapore Jingwei, May 1 (Wan Keyi) As of April 30, according to the biological classification of A-share Shenwan Pharmaceuticals, 436 companies have disclosed their 2021 annual report data. Flush iFinD data shows that among the 436 companies, 378 achieved profits and 58 lost money; in terms of performance growth, 259 companies’ revenue and net profit both increased year-on-year. Nearly 90 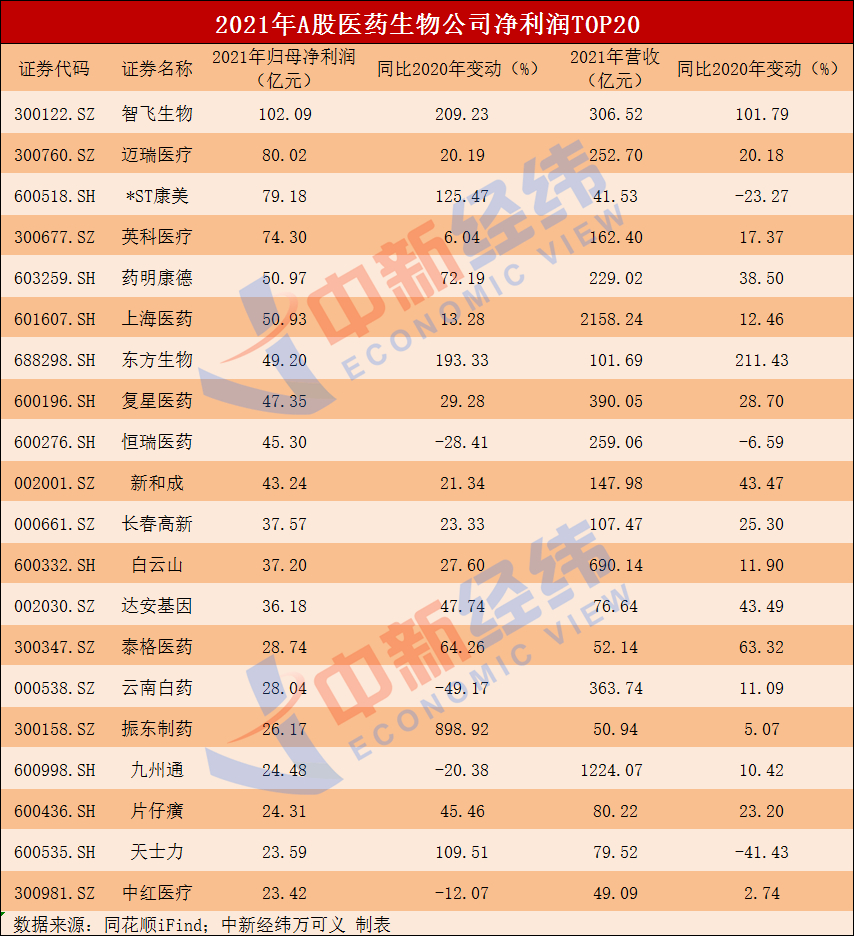 Sino-Singapore Jingwei, May 1 (Wan Keyi) As of April 30, according to the biological classification of A-share Shenwan Pharmaceuticals, 436 companies have disclosed their 2021 annual report data.

Flush iFinD data shows that among the 436 companies, 378 achieved profits and 58 lost money; in terms of performance growth, 259 companies’ revenue and net profit both increased year-on-year.

Nearly 90% of companies are profitable

Sino-Singapore Jingwei noticed that during the reporting period, among the above-mentioned 436 pharmaceutical companies, 378 had positive net profits (hereinafter referred to as "net profits") attributable to owners of the parent company, accounting for 86.7%; Revenue and net profit both increased year-on-year, accounting for 59.4%.

In terms of net profit growth, there are 69 companies with a year-on-year growth rate of more than 100%.

Sino-Singapore Jingwei noted that excluding 58 loss-making companies, another 112 had a year-on-year decrease in net profit in 2021.

The largest decline was Jiaying Pharmaceutical, which fell by 92.55% year-on-year.

In terms of Meinian Health, compared with a huge loss of 866 million yuan in 2019 and a non-net profit loss of 600 million yuan in 2020, although the company's performance in 2021 has improved, it still "increases revenue but not profit."

It is worth mentioning that Meinian Health’s large-scale acquisitions have also accumulated high goodwill.

As of the end of last year, the book value of the company's goodwill was 4.051 billion yuan.

Meinian Health mentioned in its annual report that according to the relevant provisions of the Accounting Standards for Business Enterprises, goodwill is not amortized, but it needs to be tested for impairment at the end of each year in the future.

During the preparation of the annual report in the future, the company will perform the goodwill asset impairment assessment test process.

Meinian Health also pointed out that in its daily operations, it cannot be ruled out that the acquired company does not meet the expected earnings after the acquisition, and there is a risk of goodwill impairment.

BeiGene, which lost more than 9.7 billion yuan, has become the industry's "loss king", but the year-on-year loss has narrowed.

Sino-Singapore Jingwei also noticed that the net profit of International Medicine, Bohui Innovation and Guangyuyuan decreased by more than 1000% year-on-year last year, with a decrease of 1912.52%, 4393.41% and 1008.17% respectively, and their net losses were 822 million yuan and 322 million yuan respectively. , 316 million yuan.

In addition, the above three companies are all from profit to loss.

The drop in net profit of Bohui Innovation by more than 4,000% is staggering. When it comes to the reasons for the loss in performance, the company said that firstly, the company’s subsidiary company, Zhongke Biotechnology, stopped production and transformation, resulting in a sharp drop in revenue and a large amount of losses due to suspension of work; The suspension of production and transformation of Biotech and the approval of the operating qualifications for the establishment of a pulp station under Sino Biotech were lower than expected. Hebei Daan, a subsidiary of the company, made an impairment on the goodwill formed by its acquisition of Sino Biotech according to the asset evaluation report issued by the appraisal agency. preparation; third, the company has increased external liabilities and financial expenses in order to support the construction of the blood product production base in Qujing, Yunnan; fourth, the company has further increased research and development expenditures.

However, Bohui Innovation said that the loss is not sustainable, and there is no major risk to the company's ability to continue operating.

Which one is stronger in R&D?

In the era of innovation, the importance of R&D personnel to pharmaceutical companies is obvious.

The amount of R&D investment and R&D personnel represents the innovation capability of pharmaceutical companies to a certain extent.

Flush iFinD data shows that 429 of the 436 pharmaceutical companies mentioned above have announced their R&D numbers in 2021.

In addition, there are 3 companies with more than 5,000 R&D personnel, namely International Medicine, Hengrui Medicine, and *ST Hengkang.

Ho's Ophthalmology Department has the smallest number of R&D personnel, and its R&D personnel in 2021 will only be 3.

In addition, Dali Medicine and *ST Jintai have less than 10 R&D personnel, 8 and 6 respectively.

In terms of the proportion of R&D personnel, Pharmaron has the highest proportion, reaching 90.16%.

Among the 106 listed companies with R&D personnel accounting for less than 10%, including Guangyuyuan, Tigermed, Winbond Health, Fosun Pharma, and Shanghai Pharmaceuticals, the proportion of heavy pharmaceutical holdings is the lowest, and the annual report shows 0.

In terms of the ratio of R&D investment to revenue, Dizhe Pharmaceuticals ranked first with 5,712.89%, and Maiwei Bio and First Pharmaceutical Holdings also reached 3,836.47% and 1,203.46%, respectively.

BeiGene also explained that the ratio of R&D investment to operating income has decreased compared with the same period of the previous year, mainly due to the high growth rate of the company's operating income during the reporting period.