The epidemic has spread in many parts of the country, involving these areas and groups of people!

China News Service, Beijing, April 15 (Reporter Yuan Xiuyue) In recent days, the number of infected people in Shanghai has continued to increase, and the epidemic is still running at a high level.   At the same time, with the further expansion of the scope of this round of the epidemic, the epidemic continues to spread in many parts of the country, and the prevention and control of the epidemic 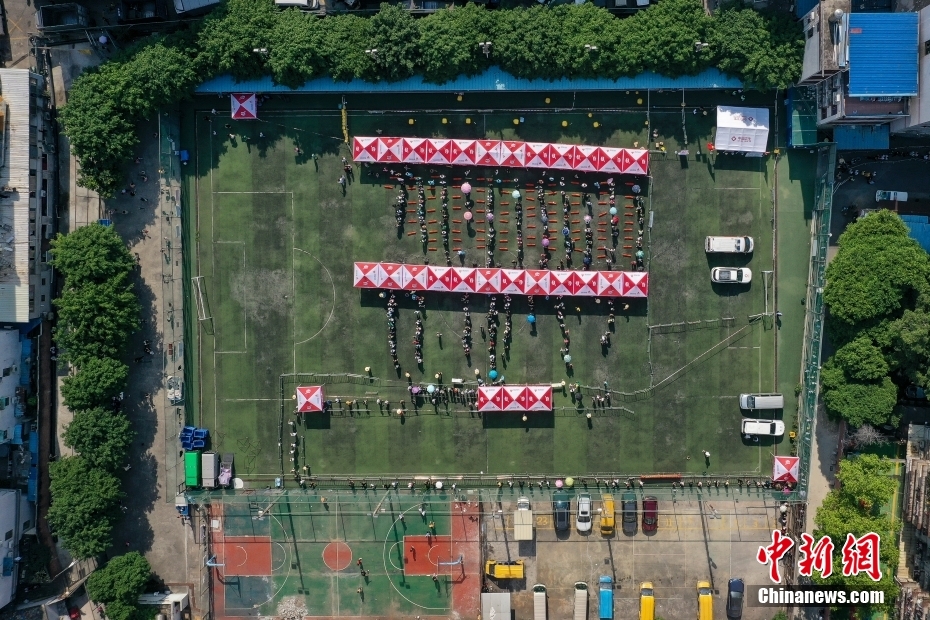 China News Service, Beijing, April 15 (Reporter Yuan Xiuyue) In recent days, the number of infected people in Shanghai has continued to increase, and the epidemic is still running at a high level.

At the same time, with the further expansion of the scope of this round of the epidemic, the epidemic continues to spread in many parts of the country, and the prevention and control of the epidemic is still in a critical period.

On April 10, people lined up in an orderly line at the nucleic acid sampling site of the Lujiang Community Football Stadium in Haizhu District, Guangzhou, to receive nucleic acid testing.

Which areas are involved?

"The current epidemic situation shows a situation of multi-point sporadic and local large-scale outbreaks, which is caused by the characteristics of virus-causing strains and technological progress in prevention and control measures. The previous laws may not be applicable to the rebound of this wave of epidemics, and the duration may be longer than before. Some, it is not easy to make predictions." Recently, Zhang Boli, an academician of the Chinese Academy of Engineering, made a judgment on the current round of the epidemic in an interview.

In recent days, the epidemic has spread in many places.

According to the National Health and Health Commission's announcement on the 12th, since March, 31 provinces, autonomous regions, municipalities directly under the Central Government and the Xinjiang Production and Construction Corps have reported more than 320,000 local infections, affecting 30 provinces (autonomous regions and municipalities).

On April 14, new local infections (except Shanghai Jilin) ​​were added.

Except for Shanghai and Jilin, the risk of epidemic transmission still exists in Guangdong, Guangxi, Hebei, Shanxi, Jiangsu, Anhui, Fujian, Zhejiang, Henan and other places.

Observing the data of infected people published in various places, the local scale outbreaks are prominent.

For example, the number of confirmed cases in Guangdong has continued to increase in recent days, mainly in Guangzhou, Shenzhen and Foshan.

Especially in Guangzhou, which accounts for more than 60% of Guangdong Province in terms of the number of newly infected people in the past seven days.

In the past seven days, Guangdong has added local infection data.

What is the risk of social transmission?

Judging from the current data, there has not been a large-scale increase trend in many places.

On the 13th, Zhang Zhoubin, Secretary of the Party Committee of the Guangzhou Center for Disease Control and Prevention, once said that although there are certain uncertainties in the current round of the epidemic in Guangzhou, the overall situation is controllable.

No infected person was found in areas other than the prevention area, control area, and closed control area.

He also mentioned that the epidemic transmission index has dropped from 5.7 people at the beginning of the epidemic to 1.7 people.

New outbreaks in many places have been dealt with quickly and effectively, and the risk of social transmission has been reduced under differentiated prevention and control measures by division and classification.

Foshan Municipal Health Bureau announced on the 15th that the nucleic acid screening results in Foshan were negative for 4 consecutive days from the 11th to the 14th, achieving a dynamic social clearing.

A new round of nucleic acid testing has been carried out in Jiaocheng District, Ningde City, Fujian Province.

On the 14th, the sixth round of nucleic acid testing was completed in the main urban area of ​​Handan City, Hebei Province, and all social test results were negative.

There were 15 new cases of local asymptomatic infections that day, all of which were found at the isolation point.

On the whole, the prevention and control measures in many places have been effective, but the epidemic situation is still severe and complex, with frequent cluster epidemics, and the risk of community transmission still needs to be vigilant.

On the 14th, Chen Bin, deputy director and spokesperson of the Guangzhou Municipal Health and Health Commission, reported that clusters of epidemics have occurred in closed and semi-closed bars, Internet cafes and other places in Guangzhou.

Chen Bin also mentioned on the 13th that judging from the nucleic acid screening situation, Guangzhou City has recently identified cases of infection among non-isolated and non-close contact groups, reminding that there is a risk of community transmission of the current epidemic.

On the 14th, Gu Haidong, Member of the Standing Committee of the Suzhou Municipal Party Committee and Executive Deputy Mayor of the Municipal Government, reported that a cluster of epidemics broke out in Zhangjiagang recently. A furniture factory in Tangqiao Town had spread among employees and their families. Suzhou, Xiangcheng, and industrial parks In other places, positive infected people have been found in social screening, especially in the areas around the railway station in Gusu District, and there have been many cases of positive infection in the temporary population from other provinces and cities in Suzhou, and the risk of hidden transmission is high.

Which groups are involved?

Observing the current round of the epidemic, many infected people involved express delivery, freight logistics, etc.

In the early morning of the 13th, Qingxu County, Taiyuan City, Shanxi Province reported that the staff of Yunda Express Logistics Park had a positive nucleic acid screening.

As of 18:00 on the 14th, this outbreak reported 7 confirmed cases, 29 asymptomatic infections, and 23 positive cases to be diagnosed.

At present, the outbreak has spilled over to two cities in Shanxi.

Truck drivers have also become a high-risk group in this round of epidemics.

According to Yi Bo, deputy director and chief physician of the Ningbo Center for Disease Control and Prevention, on the 13th, the transmission chain in Ningbo is relatively clear.

It was first introduced to Ningbo City by truck drivers from Ningbo from outside the province, and entered the community through hidden transmission while staying in the express service area. The cases found in Haishu District, Yinzhou District, and Jiangbei District were related to this chain of transmission.

From April 13 to 14, 11 new cases of asymptomatic infection were reported in Zhengzhou.

Among them, Case 40 is a truck driver who was active in Shanghai from March 27 to April 1.