I said I like peach blossoms, Li Bai won't be angry when he hears it, right?

China-Singapore Entertainment, Beijing, April 15th (Liu Yue) In the spring of April, birds are singing and flowers are fragrant, full of vitality. It's another year's flower viewing season. Some people love pear blossoms and sing "Jade makes the spirit of snow make skin, and Clarin becomes clearer in the rain"; In fact, most of the ancient literati and writers had their own favorite flowers, and 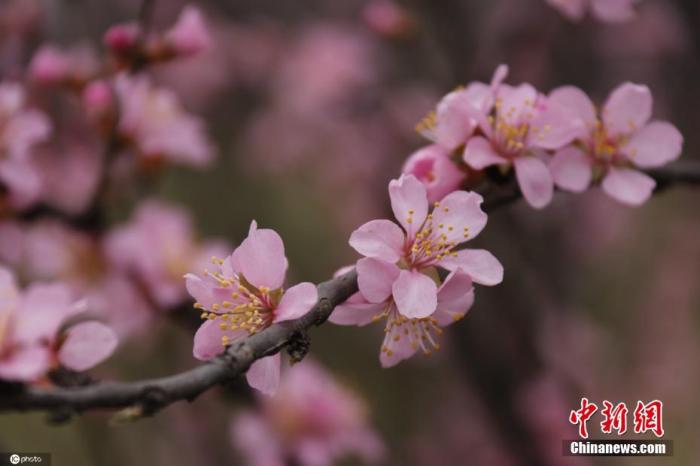 China-Singapore Entertainment, Beijing, April 15th (Liu Yue) In the spring of April, birds are singing and flowers are fragrant, full of vitality.

It's another year's flower viewing season. Some people love pear blossoms and sing "Jade makes the spirit of snow make skin, and Clarin becomes clearer in the rain";

In fact, most of the ancient literati and writers had their own favorite flowers, and they liked to recite poems and poems with flowers as the theme, and they also left many handed down poems.

So, if the ancient poets gathered together to enjoy the flowers, would it be fun, or would they "fight" for their favorite flowers?

I said I like peach blossoms, Li Bai won't be angry when he hears it, right?

The noodles are shy, and the yellow core is slightly exposed. It is beautiful and refined when you see it alone, and the stacking is scorching and colorful.

Since ancient times, peach blossoms have been favored by poets.

The peach red contains the rain, and the willow green is more smoky.

A cluster of peach blossoms with no owner, cute crimson love light red?

- Tandoori Fu's "Looking for Flowers alone by the River - Part 5"

The peach blossoms follow the flowing water all day long, where is the hole in the clear stream?

I don't know where the face is going, but the peach blossoms are still smiling in the spring breeze.

In this ten-mile scorching peach forest, Wang Wei, Du Fu and the others brought the wine to the wind in harmony, and suddenly there was a faint voice of Li Bai's complaints.

Clear water does not move, peach blossoms are on the shore.

The peach blossoms are in the water, and the spring is swaying.

The peaches and plums are sold brightly, and passersby are fascinated.

Blossoms will fall early, peaches and plums are not as good as pine.

Fang hides from the osmanthus, and does not envy the peach blossom garden.

In contrast to the peach blossoms with spring in the powder, the peony is luxurious.

Li Bai, who is a little "unaccustomed to" peach blossoms, appreciates peonies quite a bit.

At that time, he received the proposition composition of Tang Xuanzong, and wrote three "complimentary essays" for Yang Guifei in one breath, which is to use the peony to describe the beauty.

The blooming peonies are graceful and luxurious.

Clouds think about clothes and flowers, and the spring breeze blows on the threshold of Revlon.

Famous flowers all over the country love each other, and they look like the king with a smile.

For a time, the poets were not calm, and they splashed ink and ink, Bai Juyi even opened his bow and began to use things to satirize people.

A clump of dark-colored flowers, in ten households.

I would like to seek the power of good fortune for a while to reduce the coquettish color of peony.

Jujube flowers can become solid even when they are small, although mulberry leaves are soft and silky.

Laughing at the peony is as big as a bucket, and nothing is done and an empty branch.

The peony is charming and disturbing the hearts of the people, and a country is like a madman without hesitation.

The peaches and plums in the east garden of Juruo become speechless.

The first flower of ancient sad and melancholy peony

The red waves are swaying and scattered. As the sister of peony, peony is also the "top stream" in ancient poetry.

"Book of Songs" has a cloud: "Weishi and women, Yiqi joked about each other, and gave them peony."

The ancients expressed their farewell by giving peony, so peony is also called Jiangli grass.

How much melancholy is hidden in the word "Jianli", which can be called the most sentimental flower in the eyes of literati.

The red peony before the order today, a few flowers want to be old and a few new ones.

The twenty-four bridges are still there, the heart is shaking, and the cold moon is silent.

Read the red medicine by the bridge, who is born every year?

The swallow building is empty, with dark dust locks and a bed of strings.

I want to move the roots and change the leaves.

It's all old, hand-growing red medicine.

However, when everyone is emo, some people are not only not melancholy, but also engaged in the literature.

In front of the court, the peony demon is unqualified, and the chishang Fujing has little affection.

Only the true national color of peony can move the capital when the flowers bloom.

Shaoyao and Jun are close attendants, how can Furong avoid Fangchen?

If there is any kind of flower that can make everyone in the literary world shake hands and make peace, it is the plum blossom and the chrysanthemum.

Both belong to the Four Gentlemen, Mei Ju bullying the frost and Sai Xue is often regarded as a spiritual image that poets yearn for.

Chrysanthemums have experienced wind and frost, are proud, and often bloom in the countryside and mountains, so they have a noble character of indifference to fame and fortune, elegant and stubborn.

——Tao Yuanming of the Wei and Jin Dynasties, "Drinking, The Fifth"

I'd rather die with the incense sticks on the branches, never blowing into the north wind.

The lotus is exhausted, and the rain cover is no longer there, and the chrysanthemum still has proud frost branches.

Even Li Bai, who was jealous of peach blossoms, couldn't help but feel sorry for the chrysanthemums whose branches were broken by the people who climbed high in Chongyang.

Why are chrysanthemums so bitter, suffering from these two double suns?

Similar to the chrysanthemum, the plum blossom stands proudly in the snow, with a noble character, delicate fragrance, very elegant, and is also very popular among literati and poets.

The picture shows the plum blossoms placed by Aoxue.

The tree at the head of the washing inkstone pool in my house has blossoming flowers and light ink marks.

No intention to struggle for spring, Ren Qunfang is jealous.

Scattered into mud and crushed into dust, only the fragrance remains the same.

Even, some people take Mei as their wife.

All the fragrant fragrant swayed alone Xuanyan, occupying all the style towards Xiaoyuan.

The sparse shadows are horizontal and the water is clear and shallow, and the dark fragrance floats at dusk.

In fact, the literati have been lonely since ancient times.

More often, due to their identity and the background of the times, they are hard to say, and they can only use flowers to describe people and focus on the disadvantages of the times.

To be interpreted is the fate of all things, flowers are only quiet and neutral, but Bo Jun just smiled.