European of the week - Aleksandar Vucic, authoritarian tightrope walker re-elected at the head of Serbia

In Serbia, Aleksandar Vucic was re-elected President of the Republic. His ambivalent positions – both close to Russian President Vladimir Putin and a candidate for membership of the European Union – p… 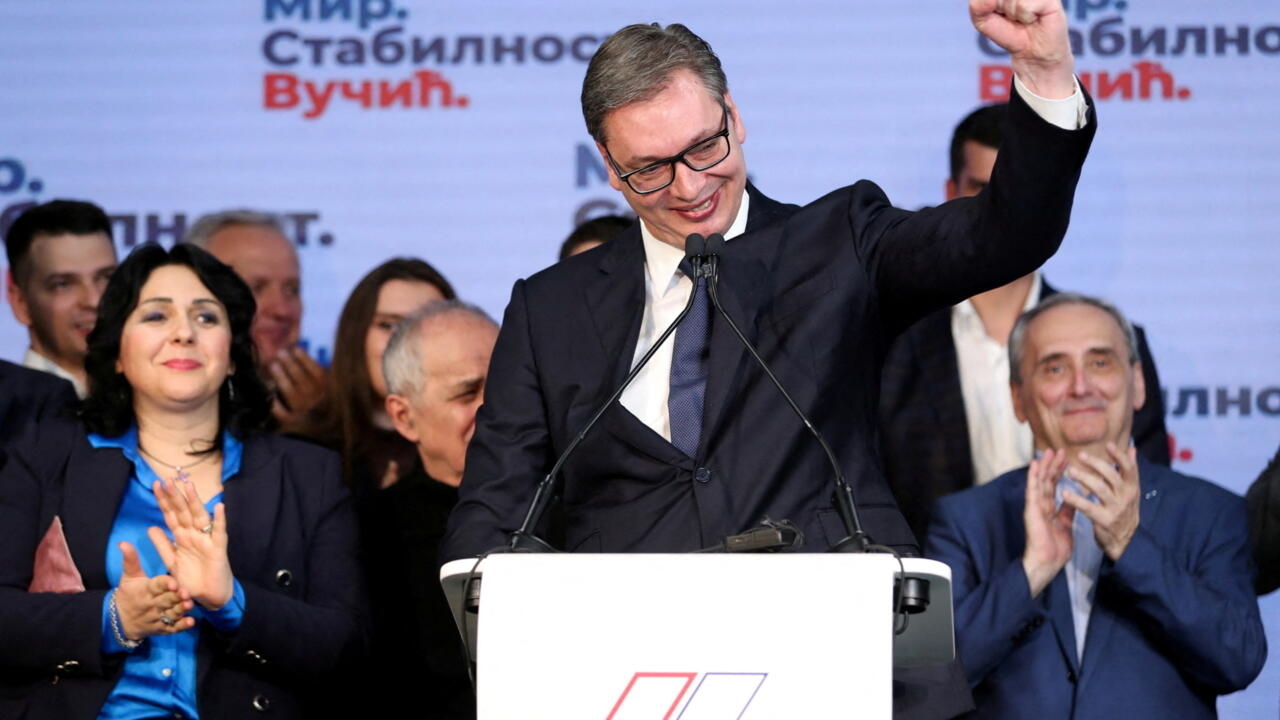 Serbian President Aleksandar Vucic expresses his joy at the results of the presidential election on April 3 which give him victory.

In Serbia, Aleksandar Vucic was re-elected President of the Republic.

His ambivalent positions – both close to Russian President Vladimir Putin and a candidate for membership of the European Union – could weaken him.

The opposition, which had boycotted the last elections, is signing its return to Parliament.

Portrait of this president who walks on a tightrope.

The wire is stretched more and more for the tightrope walker of two meters.

Aleksandar Vucic was re-elected as the head of Serbia

in the first round, on April 3, 2022. But his balancing act between nationalism, authoritarianism, Europhilia and Russophilia could prove complicated during the new mandate of this jurist from training.

However, Aleksandar Vucic has been cultivating this ambivalence for just over ten years.

Arrived in politics at the beginning of the 1990s, within the Serbian Radical Party, a far-right movement, he quickly established himself.

In 1998, he became Minister of Information during the Kosovo war (1998-1999) under the presidency of Slobodan Milosevic.

The latter lost power two years later, condemned by the International Criminal Tribunal for the former Yugoslavia for war crimes, crimes against humanity and genocide, and Aleksandar Vucic went into opposition.

To return to the fore, Aleksandar Vucic assumes his pragmatism, according to Loïc Trégourès, professor at the Catholic Institute of Paris, specialist in the Balkans: “

But, at the same time, he never denied his roots, which opened the doors of power to him while assuring him the support of Western chancelleries

A political strategy that resembles that of Viktor Orban in Hungary, one of the models of the Serbian president.

Many Russian companies are also established in this Balkan country.

An economic proximity coupled with a Slavic and Orthodox solidarity to which the two countries claim to belong.

”, observes Sophie Gueudet, doctor in contemporary history, specialist in Serbia and researcher at the University of York (UK).

A cultural identity that unites the two countries on the question of Kosovo that neither Russia nor Serbia officially recognizes.

A problematic position to join the European Union which expects a normalization of relations with Kosovo.

This relationship is all the more problematic as Russia invades Ukraine.

Aleksandar Vucic timidly condemns the aggression, but does not take part in Western sanctions.

Vladimir Putin even welcomed the re-election of the Serbian president last week.

This large diplomatic gap could put Serbia in a bad position.

It will depend on the evolution of the conflict in the coming weeks, or even the next few days

For the moment, this political strategy enjoys consensus in Serbia.

Aleksandar Vucic won more than 60% of the votes in the presidential election and his party, the SNS, the Serbian Progress Party, should win an absolute majority by allying with parties close to his ideas.

For Loïc Trégourès, this election nevertheless underlines the return of the opposition to parliament: “

We knew that he would lose feathers because the last elections had been boycotted by the opposition.

It is therefore logical that it recovers seats

Opponents of the far right, but above all of an ecological and social left with the green coalition: Moramo.

This movement could upset the lines in the medium term because ecology is taking an increasingly important part in Serbian political life.

Earlier this year, the government faced record protests against a lithium and boron mining project by British giant Rio Tinto

Sophie Gueudet analyzes this movement more broadly with the first demonstrations in 2015: “

What triggered this was the sale to a Chinese group of dilapidated factories dating from Yugoslavia.

China sought to exploit them at low cost, without carrying out the necessary work to bring them up to environmental standards.

The government had to backtrack and little by little this opposition movement is imposing itself in the local political landscape.

The ten seats obtained in parliament are proof of this.

During his campaign, the SNS candidate set himself up as a bulwark, explains Loïc Trégourès: "

As Slobodan Milosevic did before him, he said: 'Look, you are accusing me but my opponents are worse than me. So I am a compromise you should accept"

But when Aleksandar Vucic worries about a "serbian

shift to the right

" at the time of the results, for Loïc Trégourès "

it's a joke coming from

For this second term, Aleksandar Vucic hopes to maintain the balance between Russia and the European Union in the midst of an invasion of Ukraine, marked by images of the Boutcha massacre, while keeping an eye on social protests.

Because if the pragmatic 52-year-old Serbian president is challenged for his authoritarianism, he takes over the reins of the country for 5 years with his slogan: “

► To read also: Hungary and Serbia: "A strategy of alliance between nationalists who associate them with Putin"