Met you丨Amazing time! Post-95 boy shoots "international blockbuster" for 70-year-old grandmother   With a clear blue sky, bright clothes, and a confident look, this old grandmother has become popular on the Internet with her fashion blockbuster.   The photographer of the video is Li Qihang, 25, the grandson of the grandmother. This is just one of his grandma's works, there are many similar video 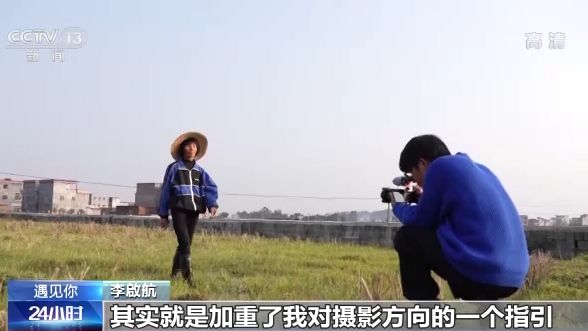 With a clear blue sky, bright clothes, and a confident look, this old grandmother has become popular on the Internet with her fashion blockbuster.

The photographer of the video is Li Qihang, 25, the grandson of the grandmother.

This is just one of his grandma's works, there are many similar videos and group photos.

Family support is the biggest motivation

When Li Qihang was a child, he liked to sit on the steps of the old house and look at the sky, imagining things in the fields and countryside as pictures.

After high school, Li Qihang began to take in photography, and from then on, he fell in love with the feeling of using images to record the world.

And his hobby was immediately supported by his parents. Without saying a word, his parents bought a digital camera for Li Qihang at a cost of more than 2,000 yuan.

With the camera, Li Qihang began to create while learning and exploring.

Soon after, he won the second prize in the high school centennial photo competition.

In 2016, Li Qihang, a freshman, won the first prize in the college's mobile photography competition.

At that time, I was very excited, and then I called my parents and cried.

I think the sense of achievement at that time is very strong, it can be converted into motivation.

In 2019, Li Qihang graduated from University and became a scenic spot picture manager. In his spare time, he took pictures in the scenic spots where he worked.

Being away from his family for a long time made Li Qihang miss him. In July 2020, he made up his mind, quit his job, used the money he saved to purchase photographic equipment, and returned to his hometown to start a business.

I grew up in such a big family since I was a child, and this subtle family concept actually aggravates my direction of photography.

(Plus) I really, really want to come back to be with my grandma or my family, and it's a very strong will, don't wait until it's really lost.

Li Qihang transformed the second floor of his house into a photography studio, and both the roof and the open space in front of the door became his shooting venue.

When ready, Li Qihang took the camera and walked around the village, looking for inspiration.

At that time, he wanted to shoot a VLOG of daily life in the countryside. Some villagers could not understand what Li Qihang was doing, thinking that he was not doing his job properly and was idle. Some people asked his grandmother if he knew what his grandson was doing.

She would say, "I will support him in whatever he does." She (actually) doesn't know what you are doing, and she will stand by me when there are voices of disapproval.

With the support of his family, Li Qihang is very confident and devoted himself to the creation of works. Whether his grandmother is going to the field or feeding chickens, he will always chase after him to shoot.

Continuously improve yourself and start from scratch

Except for his grandmother, everyone else in the family is also his subjects.

In the new year, Li Qihang plans to transform into a travel photography blogger and create a series of works for himself.

During the filming, most of Li Qihang's grandmother appeared without makeup, the costume was arranged by the grandson, and the set was completed by the two of them.

In the past, Li Qihang always felt that his grandmother's life was a bit monotonous. He didn't watch TV or play with mobile phones, and was always busy with farm work.

Now, my grandmother's life has become more colorful because of photography.

Now (grandmother) is gradually liking this item, and her self-confidence has increased a lot.

She may have been wearing casual clothes in the past, but now she will incorporate some of her own ideas. Although it is still some ordinary clothes, the overall matching will be different.

At present, Li Qihang's "Family Image" collection has been completed, in addition to grandma, grandpa, parents, brothers and sisters, and neighbors, all of them have also appeared on the scene.

In addition to creating, Li Qihang did not forget to keep charging himself. He bought a lot of painting-related books and improved his level through self-study.

Although I am not a student majoring in art or photography, my creativity is actually unlimited. I have no so-called theoretical constraints, so I can create more freely.

But people just have to keep learning and keep making progress.

On the wall of Li Qihang's studio, there are sticky notes, all of which are written on his plans for the future.

This year, Li Qihang plans to transform into a travel photography blogger, and this time the subject of photography is himself.

I am really pursuing what I like, so I am not afraid to start from scratch.

What I ended up doing might be to open an exhibition for my grandma, hoping that while she's still around, I can see a gift her grandson created for her.

Sincere emotion is the best creativity

Grandma provided inspiration for Li Qihang's creation, and Li Qihang used photography to add color to grandma's life. For him, compared to his works, he received everyone's attention and love, and the closeness and company of his grandparents and grandchildren during the shooting process. more precious.

We often keep our thoughts in our hearts, rather than sending greetings to our ears. The reason why Li Qihang's works can touch people is creativity, and sincere feelings are the key to hitting everyone's hearts.

I hope the exhibition he prepared for grandma can be held as soon as possible!