A donor sponsors the chemotherapy sessions for "Umm Muhammad"

A donor covered the payment of 54,000 dirhams, the cost of chemotherapy sessions for (Um Muhammad), who has been suffering from breast cancer for two years, and the disease began to threaten her life, and she needs chemotherapy of a special kind at Sheikh Shakhbout City Hospital in Abu Dhabi, for a period of six months, The cost of treatment is 72 thousand dirhams 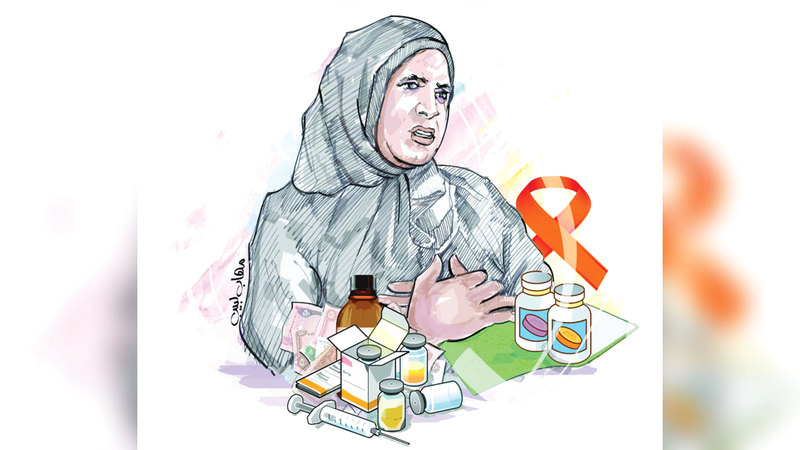 He paid 54 thousand dirhams, and the health insurance covered the rest of the expenses

A donor sponsors the chemotherapy sessions for "Umm Muhammad"

He coordinated the "hotline" between the donor and the Department of Islamic Affairs and Charitable Activities in Dubai, to transfer the donation amount to the patient's account in the hospital.

(Umm Muhammad) expressed her gratitude and thanks to the donor, for his quick response to her suffering, extending a helping hand to her, and standing by her side in light of the difficult circumstances she is going through at the present time.

She confirmed that the news of the donation and the full payment of the cost of her treatment, opened a new window of hope for her, warmed her heart, and brought happiness to all family members.

On the second of last March, "Emirates Today" published the story of the patient (Um Muhammad - Sudanese - 47 years old), who suffered from breast cancer two years ago, and it began to threaten her life, and medical reports confirmed that the patient suffers from breast cancer of the second degree, and needs to be examined. Doses of chemotherapy of a special kind in Sheikh Shakhbout City Hospital in Abu Dhabi, for a period of six months, to control the disease and prevent its spread to the rest of the body. The cost of chemotherapy is 72 thousand dirhams. The health insurance pays 18 thousand dirhams, and 54,000 dirhams remain. And her financial means prevented the start of implementing the treatment program.

And (Umm Muhammad) had previously told the story of her suffering with the disease, saying that she works as a CT scan specialist in a private clinic, and two years ago she felt severe pain, with a tumor in the left breast, high temperatures, and headaches, and she went to the oncology department, and after signing the examination. The doctor confirmed that the tumor was "benign" and did not pose a threat to her life, and gave her medications and painkillers to relieve the pain.

She continued that her condition improved, but soon the pain returned more fiercely, forcing her to call an ambulance, and transferred her to Sheikh Shakhbout Medical City Hospital, and entered the emergency department, and the doctor requested a CT scan of the pain area, and performed some analyzes, and requested a biopsy of the tumor, To determine its type, whether it is malignant or benign, and to check on her health, the examination result confirmed that the tumor is “malignant”, and that she has second-degree breast cancer, and she must receive chemotherapy, to reduce the size of the tumor, after which she will need to remove and restore the left breast.

(Um Muhammad) added that she needs to start chemotherapy to save her life, explaining that she is the only breadwinner for her family of four, and her husband does not have a fixed job, following up that she works in a private clinic with a salary of 11,000 dirhams, from which she pays 1500 dirhams in bank installments, and 2500 Dirhams for rent, and the rest of the salary for the requirements of daily life.

She confirmed that she was unable to meet the costs of chemotherapy, and at the same time she feared that the cancer would spread to the rest of her body, endanger her life, and leave her children without care.

Medical reports issued by Sheikh Shakhbout City Hospital in Abu Dhabi, and "Emirates Today" obtained a copy of it, confirmed that the patient entered the hospital with severe pain, a tumor in the breast, with loss of appetite and inability to eat, and after conducting examinations and analyzes, it was found that she had cancer. Breasts of the second degree.

She added that she needs doses of chemotherapy, and then she will undergo surgery to remove and restore the breast, to prevent the spread of cancer to the rest of the body, which threatens her life.

• The patient has been suffering from breast cancer for two years, and her husband does not have a stable job.