Press review Africa - In the spotlight: the three Lions, the Eagle and the Stars…

Africa press review In the spotlight: the three Lions, the Eagle and the Stars… Audio 03:46 Senegalese President Macky Sall talks to Sadio Mane and Kalidou Koulibaly as he greets the Senegal national football team on their arrival after their African Cup victory, at Leopold Sedar Senghor Airport, Dakar, Senegal on February 7, 2022. REUTERS - ZOHRA BENSEMRA By: Frédéric Couteau Follow 4 mins A 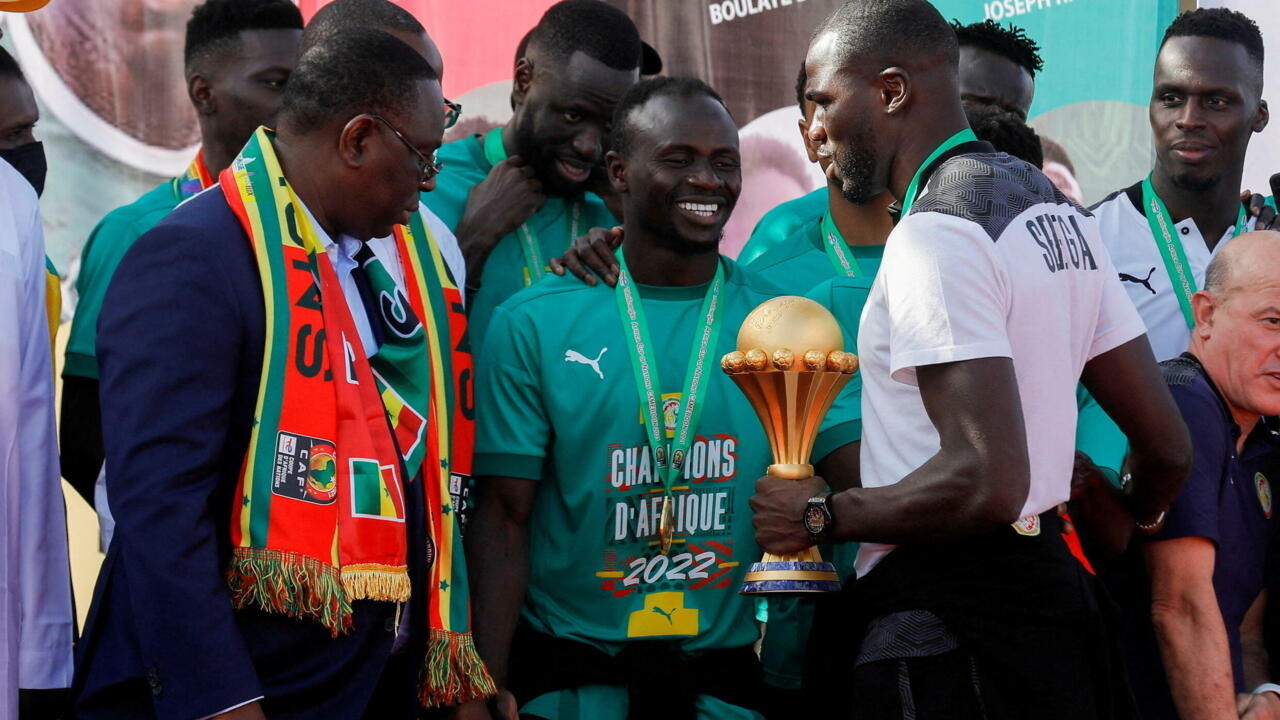 In the spotlight: the three Lions, the Eagle and the Stars…

And if it was the year of Africa?

An Eagle to soar high in the Qatari sky and a Star to shine in the firmament.

Africa will be well represented at the FIFA World Cup in Qatar at the end of this year.

She even has something to dream of winning, why not, for the first time, the Holy Grail.

Everything will be possible for the continent (…).

Indeed, the Lions of Teranga, first of all, qualified last night at the expense of the Pharaohs.

A remake of the CAN final which once again turned in favor of the Senegalese.

on the front page.

The Lions did it.

(…) Senegal snatched its qualification for the next World Cup ahead of Egypt, thanks to the penalty shootout (3-1).

The Lions had quickly fallen behind (from the first leg) by opening the scoring in the 4th (1-0), even if they played 120 minutes before dismissing the Pharaohs.

(…) Senegal leaves Egypt and Salah on the floor

Aliou Cissé's Lions thwarted the trends of history which saw the African champion not taking part in the next World Cup.

Cameroon, crowned with its title, had missed the boat.

More generally, over the last 30 years, it's fifty-fifty: half the time, the reigning African champion fails to join the World Cup.

In any case, it's done for the Lions.

The Indomitable Lions for their part have well deserved their nickname... This is what

in the bitter aftermath of a 2021 African Cup of Nations that the Cameroonians organized to occupy only third place, and while a number of bookmakers had sold the skin of the… Lion before having killed him, the Lions of the brand new coach Rigobert Song, devoured the Algerian Fennecs in their hitherto impregnable stronghold of Blida.

It must be said bluntly,

the Indomitable Lions, carried to the edge of the lawn by the new president of the Cameroonian Football Federation, Samuel Eto'o in person, showed a sacred character to emerge victorious from the Algerian hell.

Other beasts, the Atlas Lions, have therefore also won their ticket... The daily

at the end of one of the most successful matches under the Halilhodzic era and an undisputed victory against DR Congo , the Moroccan national team has validated its ticket for the 22nd edition of the World Cup, Qatar 2022. The goals of Azeddine Ounahi, Tarik Tissoudali and Achraf Hakimi animated the bays of the Mohammed V Complex in Casablanca.

Tunisia will also go to the World Cup.

The Eagles of Carthage qualified

The national team got its ticket thanks to the goalless draw (0-0) obtained last night, at the Radès stadium in front of its Malian counterpart, on behalf of the 3rd and last round return of the African qualifications.

”, recalls for its part the information site

the double confrontation between Ghana and Nigeria kept its suspense until the final whistle,

points out the daily newspaper

After the 0-0 goalless draw in Ghana, Nigeria, which received the Black Stars in Abuja, seemed to be holding the right end.

It was not counting with the Ghanaian captain Thomas Partey, scorer from the 10th minute.

But quickly, Nigeria came back thanks to a penalty.

The final score will remain at 1 goal everywhere, thus advantage to Ghana which qualifies thanks to its away goal.