Eärendel unseats Godzilla: this is the farthest star that has been observed

We have never seen a star so far away. The Hubble Space Telescope has photographed a star that was formed only 900 million years after the Big Bang, that is, in... 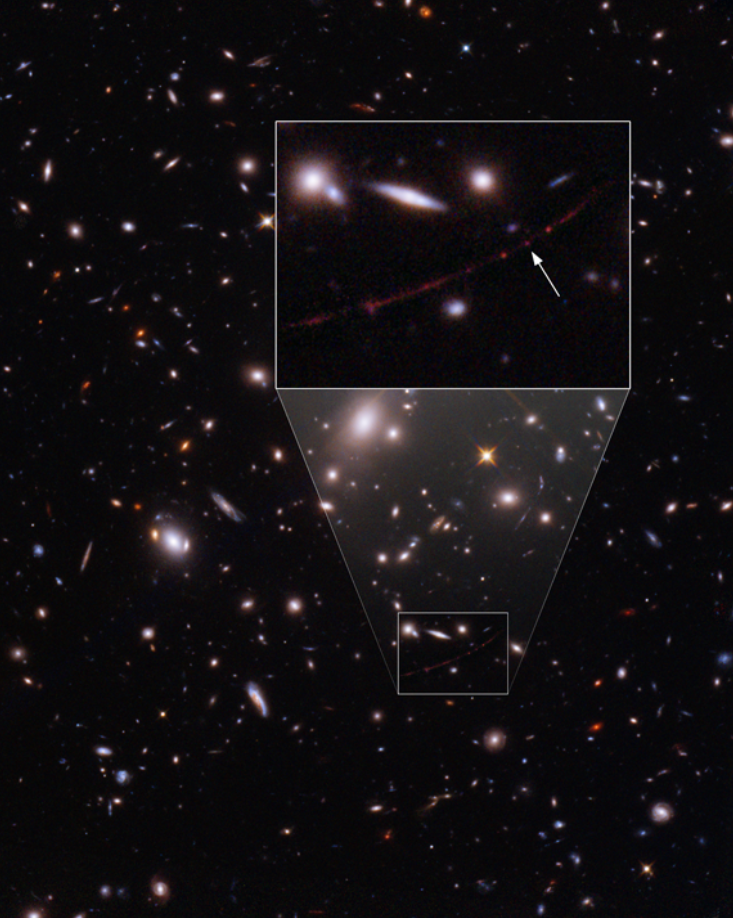 We have never seen a star so far away.

They have baptized it as Eärendel, a name taken from a poem by Tolkien -of which the astronomers who sign this finding are fans- and that is already part of the history of astronomy and that symbolizes the scope of robotic eyes built by man to try and see how it all started.

together with the European Space Agency (ESA), had created anticipation for this announcement by announcing last week that its space telescope, close to retirement, had made "an exciting discovery" for "the books of records".

And so it has been because the jump with respect to the most distant star that had been observed so far is gigantic.

As José María Diego, a researcher at the Institute of Physics of Cantabria (IFCA, CSIC-UC) and co-author of the study, explains by phone from Philadelphia, Eärendel unseats Godzilla, the star that until now was the farthest, at 10,900 million light years .

Enlargement of the area of ​​the sky where EärendelNASA/ESA/Johns Hopkins Univ.

Details about how they have captured their light, which has therefore taken 12.9 billion years to reach Earth, are published this week in the journal

, in research led by Brian Welch, from Johns Hopkins University, who has told with the participation of the Spanish astronomers José María Diego and Yolanda Jiménez-Teja.

"Eärendel is the farthest star we know, although it no longer exists.

It is very bright, but it exploded long ago. However, we still see the light that reaches us from it

Eärendel was much brighter and more massive than our sun, as astronomers estimate that it would have had more than 50 times the mass of the Sun, thus rivaling the most massive known stars.

"We can say that it is the farthest star that has been seen, but by a long way",

the secretary general of the International Astronomical Union (IAU), José Miguel Rodríguez Espinosa, values ​​​​in a telephone conversation, who does not hide his surprise at this great observational achievement .

As the researcher from the Institute of Astrophysics of the Canary Islands (IAC) relates, this very distant star

"has been detected because there is a gravitational lens that magnifies it, like a magnifying glass

. And that gravitational lens is a cluster of galaxies close to the star. First, what is done is to produce several images of an object that is behind, and on the other hand, they magnify the intensity", details the astronomer, without connection with this study.

There are, however, older stars -and therefore far away- although we have not been able to see them and perhaps we cannot see them.

"Two hundred million years after the Big Bang, the first ones were formed, which would be stars that we call population III, supermassive and zero metallicity. This means that they were composed only of hydrogen. What happens is that during the life of a star, when the hydrogen runs out, helium is formed, and then carbon, oxygen, aluminium, etc.

are formed.The metallicity increases as the universe accumulates years,

and the stars that form later therefore contain more metals", explains the scientist. Our sun, without going any further, "is a star that has a lot of heavy metals inside, including Uranium, although it will not explode like a supernova, as very massive stars do", points out the Spanish astronomer.

launched in 1990, has now achieved a historic image that should be portrayed in more detail by its successor, the

, which was launched on Christmas Day and is only a few months away from being fully operational.

This has been confirmed by Brian Welch, whose team participates in one of the observation programs with the

As he has anticipated, he hopes to find out in more detail the composition of Eärendel,

formed before the Universe was filled with heavy elements,

"We are going to learn many things: we will obtain the spectrum, that is, the fingerprint of a star, it will tell us how old it is, how long ago it was born, how long it was alive when the light we see now was emitted, its metallicity or the elements that compose it", points out José María Diego.

"Studying Eärendel will be a window into an era of the Universe that we are not familiar with, but which led to everything we know,"

Welch said in a statement.

And, he adds, "these stars are first generation and we hardly knew anything about them".

They call them primordial and are formed from all those elements that were forged shortly after the Big Bang that José Miguel Rodríguez mentioned.

"Until now they have eluded observers, but now they could be detected if observed through high-magnification gravitational lenses, as in the case of Eärendel," Welch proposes, thus comparing this finding.

It's like we've been reading an interesting book, but we start at the second chapter and now we have a chance to see how it all started."

'The Voyage of Eärendel, the Evening Star'

The name of the farthest star has been taken from a poem that the British writer JRR Tolkien composed in September September 1914 during a vacation on the family farm in Nottinghamshire.

The voyage of Eärendel, the evening star

The Voyage of Eärendel the Evening Star

) recounts the journey through the sky of the sailor Eärendel, which the writer would later incorporate into the stories of

The world wide openIan Stewart: "The same mathematics that controls nuclear missiles has many peaceful uses"

War in Ukraine Nuclear power plants as a strategic weapon: is there a risk of another Chernobyl in Ukraine?

ScienceThese thousand Spanish crops will survive if there is a catastrophe