"Grandma Deng", who made Shanliwa amaze the world, is gone

China News Service, Baoding, March 23 (Reporter Chen Lin and Lu Zihao) With the sad news of "Grandma Deng"'s departure, when it crossed the Taihang Mountains and returned to the Fuping campus in Hebei, this place where music often played and was full of joy on weekdays , the children cried, "keeps crying".   Deng Xiaolan, who is nearly eighty years old, is the "Grandma Deng" in the eyes of the 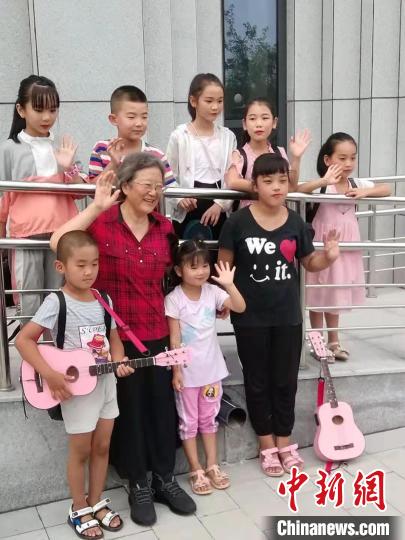 China News Service, Baoding, March 23 (Reporter Chen Lin and Lu Zihao) With the sad news of "Grandma Deng"'s departure, when it crossed the Taihang Mountains and returned to the Fuping campus in Hebei, this place where music often played and was full of joy on weekdays , the children cried, "keeps crying".

More than a month ago, 44 ​​children from the mountainous area of ​​Fuping County, Baoding City, stepped onto the stage of the opening ceremony of the Beijing 2022 Winter Olympics, stunning the world with their heavenly voices.

This also made Deng Xiaolan, who insisted on going from Beijing to Fuping, Baoding, to build a "music dream" for Shanli's children after retirement, and once again attracted the attention of the media.

According to public information, Deng Xiaolan, who was born in Fuping County in 1943, is the daughter of Deng Tuo, the former president of People's Daily.

Due to the complex of her parents and her feelings for this land, she has always regarded it as her "second hometown".

After retiring from the Beijing Public Security System in 2004, she resolutely came to Malan Village to teach music to the children of the mountain village, and she persisted for 18 years.

She has previously said, "Music brings joy and hope to children."

On August 3, 2019, Deng Xiaolan and some members of the Malan Little Band took a group photo at the 4th "Malan Children's Music Festival" in Fuping.

On the evening of March 22, Liu Kai, the principal of the central school of Xiazhuang School District, Chengnanzhuang, Fuping County, told reporters that when he heard the news of "Mr. Deng" leaving, he couldn't believe it, and he was always in grief.

Liu Kai recalled that after retirement, "Mr. Deng" came to Fuping for a long time every year, and has been teaching music to children.

The last time I saw "Mr. Deng" was on the evening of March 19. The old man was infusion in the ambulance.

Today, the children of the school choir "didn't believe it and kept crying" after hearing the news. Some students cried and said that they wanted to play the violin with Grandma Deng...

Recalling that 44 students went to the opening ceremony of the 2022 Winter Olympics in Beijing, Liu Kai said: "The children have changed a lot, they have become bright, cheerful and confident!"

In 2021, Deng Xiaolan will teach children to learn the violin at Malan Primary School.

Deng Xiaolan's children said in the obituary that the Olympic anthem sung by the children of the Malanhua Choir of the Beijing Winter Olympics was highly praised by the world, and pushed her happiness to a peak. She left at the highlight of her life, and Going peacefully and peacefully, this is also the greatest comfort to us!

In Liu Kai's WeChat, there are many teachers and students who are reluctant to leave and miss "Mr. Deng": "May Teacher Deng have a good journey", "I hope there is no pain in heaven, only singing"...... Bai Zhenyuan, a member of Malan's little band, said, "On the road to heaven, there are songs that accompany you."

"I will always miss Grandma Deng, who will illuminate the future of countless children with her own light!" "Mr. is gone and turned into the brightest star in the sky, illuminating the way forward for rural children!" Netizens expressed their sustenance on the online platform. grief.