China News Service, Beijing, March 22. On March 21, 2022, a Boeing 737 (MU5735) of China Eastern Airlines crashed during a Kunming-Guangzhou flight.   At present, on-site rescue, aftermath and investigation of the cause of the accident are in progress. For many issues of public concern, some news and data have been verified and confirmed. The picture shows the armed police officers and soldier 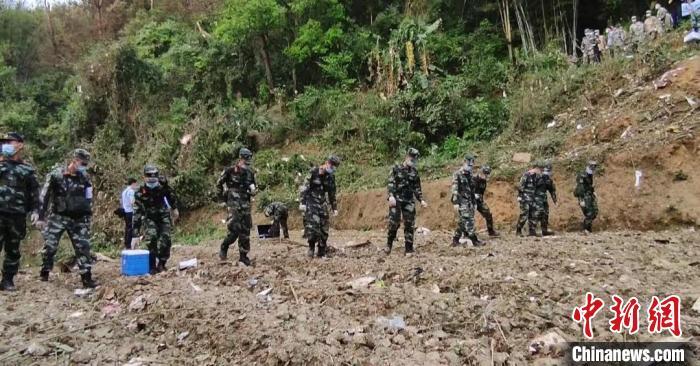 For many issues of public concern, some news and data have been verified and confirmed.

According to the official Weibo news of the Guangxi Zhuang Autonomous Region Meteorological Bureau, at 14:38 on March 21, a Boeing 737 of China Eastern Airlines crashed over Molang Village, Langnan Town, Teng County, Wuzhou during the Kunming-Guangzhou flight.

The reporter learned from the emergency headquarters of Guangxi Zhuang Autonomous Region on the 21st that the specific crash site of the Boeing 737 passenger plane of China Eastern Airlines was Mozong Village, Langnan Town, Teng County, Wuzhou City.

Fourth, the number of people on board: 132 people

According to the notice from the Civil Aviation Administration of China and the announcement of China Eastern Airlines, there were 132 people on board, including 123 passengers and 9 crew members.

5. Passenger situation: There were no foreign passengers on the crashed flight

Data from multiple platforms such as Feichangzhun shows that the accident flight was carried out by a Boeing 737-800 with an age of 6.7 years and was delivered to China Eastern Airlines Yunnan Branch on June 22, 2015. Economy class).

Seven, the grounding of the aircraft involved: China Eastern Airlines has all grounded

At present, China Eastern Airlines has controlled all the Boeing 737-800 flights of the company to the ground, and will no longer perform flights after the flights in the air land.

Other airlines had not responded by press time.

8. Situation at the scene: the largest wreckage is the wing with the logo of China Eastern Airlines

At the time of the incident, Li Chenbin, a network technician from Guangxi Mobile, was working on a mountain near the accident.

Li Chenbin said that there were no mountains at the crash site, but mostly small hills.

About half an hour after the crash, the wildfire started.

The largest wreckage seen at the scene was the wing with the China Eastern Airlines logo.

9. Rescue situation: A temporary command and rescue center has been set up near the site

After the accident, local police, medical staff, firefighters, armed police, Guangxi Mobile Company and other rescue forces quickly rushed to the scene to carry out rescue.

A temporary command and rescue center has been set up near the crash site.

The working group of the Civil Aviation Administration of China arrived in Wuzhou on the evening of the 21st and started work quickly to guide and assist the local on-site rescue and aftermath.

On the evening of March 21, a makeshift command center in a village near the crash site.

[To be officially confirmed news or data]

1. Casualties: yet to be disclosed

As of press time, no authoritative organization has released relevant casualty data.

The list of passengers on board has not been officially released as of press time.

The list, which is about 60 to 70 centimeters long, contains information such as the passenger's name (pinyin) and seat.

Third, the cause of the crash: still under investigation

On the 22nd, Boeing China related staff told a reporter from China-Singapore Finance and Economics: We are cooperating with China Eastern Airlines to provide them with support.

At the same time, Boeing is in contact with the National Transportation Safety Board, and our technical experts are ready to assist the Civil Aviation Administration of China with its investigation.

According to data from the Feichangzhun APP, after flight MU5735 took off from Kunming Airport, it had been cruising at an altitude of about 8869 meters. At 14:19 in the afternoon, the plane suddenly dropped from the cruising altitude, and the flight speed started to drop from about 845 kilometers per hour.

At present, the official disclosure of the investigation results and details is yet to be confirmed.

Fifth, the attitude of the airliner before the crash: nose down?

A surveillance video before the crash showed a plane crashing straight into the mountains with its nose down.

Judging from the video, the passenger plane is suspected to have not disintegrated in the air.

The entire fall process does not exceed 5 seconds.

On the afternoon of the 21st, The Paper verified the authenticity of the video with Wuzhou Beichen Mining Co., Ltd., the company that captured the surveillance footage.

At present, the results and details of the investigation are yet to be officially disclosed for confirmation.

Any air accident is a tragedy, and the real cause of the accident needs to wait for the official investigation conclusion, and rely on black boxes to solve the mystery.

According to the news from the Guangxi Department of Transportation in the early morning of the 22nd, as of now,

and 30 helicopter medical staff have arrived in Wuzhou, and 10 family members are rushing to Wuzhou. The relevant pick-up work is still being carried out in an orderly manner.