The persistence of the seventy-year-old craftsman: the "light and shadow" of history preserved from the past to the present

China News Service, Taiyuan, March 12th, title : The persistence of the seventy-year-old craftsman: the "light and shadow" of history preserved from ancient times to the present   Author Gao Ruifeng   "The technique of Chuan Tuo not only takes pictures of objects, but also serves as historical evidence and cultural heritage. Each piece of Chuan Tuo works preserves precious imprints of Chinese 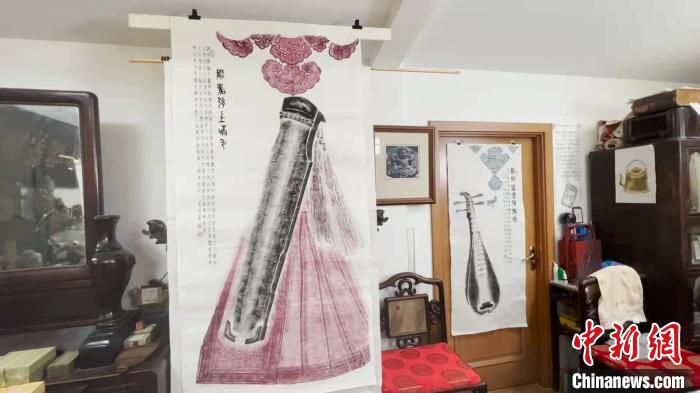 title : The persistence of the seventy-year-old craftsman: the "light and shadow" of history preserved from ancient times to the present

"The technique of Chuan Tuo not only takes pictures of objects, but also serves as historical evidence and cultural heritage. Each piece of Chuan Tuo works preserves precious imprints of Chinese history and culture." March 12, Taiyuan, Shanxi, Chen Xu Busy creating in his Chuantuo studio.

Chuantuo, an ancient skill, is known as "the 'camera' that revives history".

In the Southern Dynasties Liang Yuhe's "Lunshu Table" has the saying "use thin paper for the expansion of books", and "Sui Shu·Jing Jizhi" has the record that "the book of its inheritance and expansion is still in the secret palace".

The Tang Dynasty rubbings discovered by Taoist Wang Yuanlu in the Qing Dynasty in the Mogao Grottoes are well-known in the industry.

"Chuantuo works often contain information on ancient history, culture, art, life and other aspects, which can fill the lack of historical documents and archives, and have profound social significance." Chen Xu said that Chuantuo skills are not only art, but also a kind of The carrier, Chuantuo works make the cultural heritage "live", and the masterpieces of Chuantuo through dynasties have become the treasures of Chinese traditional culture.

"At that time, when I was studying the physical remains of Shanxi merchants, I came into contact with Chuantuo for the first time, and then I became addicted to it, and I have been working hard to explore it for more than 20 years." He said.

The rubbing technique is a method of covering the rubbed utensils with paper, ink, etc. with the rubbing tools, and printing the inscriptions or decorations on them.

Due to the different utensils, their forms and contents are rich in expressions, such as flat extension, Ying extension, and full shape extension.

"Chuantuo skills mainly rely on hand-to-hand transmission and continuous practice. While accumulating, we communicate with colleagues and summarize experience." Chen Xu introduced that Chuantuo will present the original temperament and connotation of the original objects. , Many diaspora cultural relics, documents, etc. in history have been circulated due to the works of Chuantuo.

How to better integrate this ancient skill into modern life and make cultural heritage "live", Chen Xu has been exploring.

In Chen Xu's view, oracle bone script, tile pattern, epitaph inscriptions... and objects in daily life can all be spread.

The techniques of spreading and spreading can also reflect the contemporary era, such as urban and rural construction, poverty alleviation and so on.

Chen Xu, a master craftsman of Chuantuo, set up a course of "Chuantuo" at Shanxi University of Finance and Economics, hoping to expand the inheritance team of this ancient skill through his own efforts.

"My work 'Vegetable Basket Is Still Good' uses vegetables, fish and shrimp as the original propaganda, presents the achievements of poverty alleviation in rural areas, and records the exciting historical stage of having vegetables and fish in rural vegetable baskets." Chen Xu said that at present, the works of his pedagogy include Oracle bone inscriptions, Jinshi, Chinese finance, Shanxi merchants, Songshan geology and other series.

Chen Xu said that it is very meaningful to show Chinese civilization through Chuantuo.

Innovate on the basis of Pingtuo, Yingtuo, and Quantuo, such as combining software, living bodies, hardware and other traditional objects to create, so that ancient skills can be inherited in innovation, and traditional technology is used to record, display, and tell Chinese history. culture.

"At present, the 'Traditional' course has been opened in Shanxi University of Finance and Economics, and I hope to expand the inheritance team of this ancient skill through my own efforts." Chen Xu said.