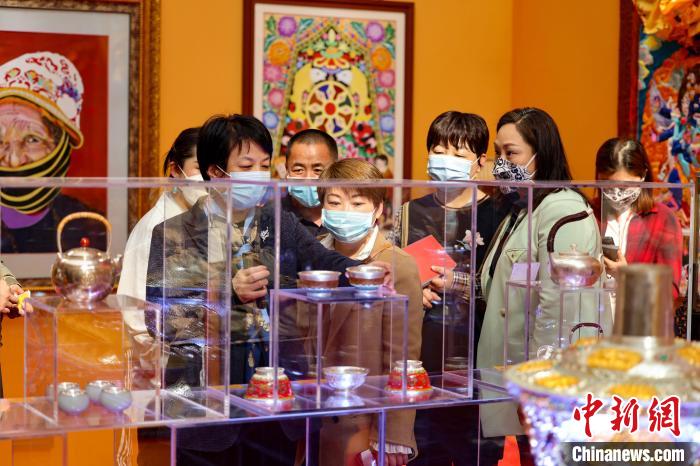 Huangzhong District is a cultural area in Qinghai Province and one of the birthplaces of Hehuang Culture.

There are 42 national, provincial and municipal intangible cultural heritage projects in the area.

Among them, eight traditional folk handicrafts, such as pile embroidery, silk inlay, and carving, are the main body. They are dubbed the "eight-petal lotus" and have become an important representative of Huangzhong and even Qinghai's intangible cultural heritage.

According to Chen Nan, deputy head of Huangzhong District, Huangzhong District is located in the eastern part of Qinghai. It is one of the core areas of Hehuang culture, the birthplace of Cayo culture, and a rich mining area of ​​intangible cultural heritage in Qinghai Province.

"Through this event, Huangzhong's long-standing intangible cultural heritage has successfully walked out of the 'deep boudoir' and came to Nanjing, the ancient capital of six dynasties, to show the world the unique charm of Hehuang culture. This is not only a cultural exchange between the east and the west, but also a It is a vivid portrayal of Nanjing-Xining's 'Ning-Ning cooperation'," said Liu Bo, deputy secretary-general of Xining Municipal Government and head of the Nanjing Municipal Working Group for counterpart assistance to Xining.

Liu Bo said that Xining is located at the "source of the Yangtze River", and Nanjing is located in the lower reaches of the Yangtze River. For more than 5 years, Nanjing's counterpart has helped Xining, and the promotion mechanism has been continuously improved, the coverage area has been continuously expanded, the assistance funds have exceeded 600 million yuan, and collaborative projects have been implemented. Nearly 100, all 63,600 impoverished people in Xining have been lifted out of poverty, all 330 impoverished villages have been withdrawn, and all 3 impoverished counties have been "removed".

According to a reporter from Chinanews.com, during this public welfare exhibition, the sales revenue of all exhibits will be remitted to the Qixia District Charity Federation account through an exclusive QR code, and will be used to support the development of the non-heritage industry and public welfare undertakings in the later stage.

At the same time, at the event site, a cultural and creative company in Nanjing also carried out on-site design and release, tailor-made for Huangzhong a series of cultural and creative products that reflect intangible cultural heritage skills, highlight local characteristics, and meet market demand, so that these ancient traditional skills can be Combine with modern life, modern creativity, and modern design to create sparks.