China News Service, Lanzhou, February 27 (Zhang Jing) After the Spring Festival, there is a "blowout period" of talent demand, and it is also a "golden period" for job seekers to find jobs. In order to meet the needs of employers to recruit all kinds of talents, Lanzhou has added new live broadcasts and held several "online + offline" job fairs in a row, trying to connect Northwest job seekers t 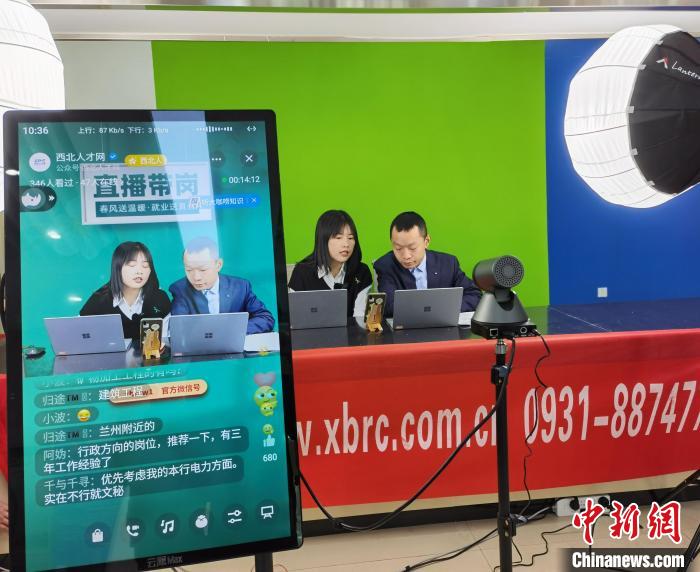 China News Service, Lanzhou, February 27 (Zhang Jing) After the Spring Festival, there is a "blowout period" of talent demand, and it is also a "golden period" for job seekers to find jobs.

In order to meet the needs of employers to recruit all kinds of talents, Lanzhou has added new live broadcasts and held several "online + offline" job fairs in a row, trying to connect Northwest job seekers to the whole country and seek more employment opportunities.

In fact, as early as the end of 2020, due to the impact of the epidemic, some provinces in China have gradually become popular with live broadcasts. This emerging recruitment model is actually inspired by "live broadcast with goods". As you are familiar, there are also live broadcasts below the video. There are clearly marked buttons, and you can send your resume by clicking on it, and there are many recruiting companies and positions, which greatly satisfies job seekers' online "search for jobs".

The HR of the enterprise turns into a network anchor to bring recruitment positions into the live broadcast room, and introduce the company's situation, job information, remuneration, etc. together with the third-party anchor.

"Recommendation for administrative positions", "Is there any recruitment in e-commerce", "What are the positions for automobile inspection"... For a time, job-hunting information kept swiping in the message area of ​​the live broadcast room.

Zhao Yunyun, who is keen to find a job with a live broadcast, is approaching graduation. Compared with the crowded offline job fair, she is more willing to enter the live broadcast room to open the door to online job hunting without leaving home.

She said that it is necessary to do preliminary understanding and screening on the cloud, save time and cost, and improve the success rate of job hunting.

At the other end of the live broadcast room, Li Junzheng was a guest in the capacity of the human resources manager of an Internet company. He said that he had broadcast live broadcasts in Changsha many times before. Due to the needs of the company's development, he started the live broadcast debut in Lanzhou.

"Comparing the two places, the form and content of the live broadcast are similar." However, because it is a third-party live broadcast platform and there are a large number of recruiting companies, he made a company promotion and basic job information introduction in only 10 minutes, and said If you have enough time, you can interact more with job seekers online and you will achieve better results.

Chen Lei works in a human resources company in Lanzhou. As a third party to build a live broadcast platform, he has participated in more than 10 live broadcasts since October 2021.

He believes that "the way for job seekers in the northwest to go out cannot be limited to live broadcasts and job postings".

Therefore, he and his team members updated the technology platform, cut into the live screen of the offline job fair in the live broadcast room, and connected with enterprises in other provinces to provide more extensive job recruitment information for job seekers in the northwest.

Also a guest in the live broadcast room is Fu Songhua, director of Lanzhou Employment and Talent Service Bureau. Her live broadcasts involve finance, agriculture, construction, medical care, computer services and software, wholesale and retail, as well as accommodation and catering, Residential services, education and other industries, together with the anchor, recommend jobs for job seekers, answer questions, and conduct real-time interactive exchanges.

The picture shows the traditional mode of job fair scene.

But even so, this new form of live broadcasting does not seem to have many job seekers paying for it in Lanzhou, and most people still prefer the traditional "face-to-face job search is more reliable".

From the reporter's point of view, live broadcasting is only a mode of online recruitment. Compared with offline recruitment, it has outstanding advantages. It breaks the limitation of time and space, expands the scope of publicity, and makes the audience wider. However, offline recruitment also has irreplaceable advantages. For example, recruiting companies and job seekers communicate face-to-face and truly feel each other's suitability for jobs.

Whether it is the traditional offline delivery of resumes, remote video interviews, or live broadcasts, it reflects the diversification and informatization of job search forms.

Especially for Lanzhou, which is located in the northwest region, the people are straightforward, slightly conservative in concept, lag in accepting new things, accepting "Internet + employment" to a limited extent, and the stereotype of "Internet illusion" will make people question authenticity and Reliability, and the interaction between live broadcasts are not as direct and comprehensive as offline, which leads more job seekers to choose offline recruitment.

Feng Le'an, deputy director and associate researcher of the Institute of Public Policy, Gansu Academy of Social Sciences, believes that with the advent of the information age, the Internet continues to change people's lives. Compared with online shopping, live broadcasting is precisely the "Internet +" that promotes the continuous employment model. The performance of conversion and upgrading makes the job search process more direct, convenient and efficient.

"It needs to be pointed out that the employment situation of a region is closely related to the level of local economic development, industrial structure, and population aggregation." Feng Le'an said that as an economically underdeveloped northwestern region, for the emerging model of live broadcasting, on the one hand, it is necessary to Increase support, encourage talent supply and demand parties to reach employment agreements through live broadcasts, reduce information transmission costs, and improve employment efficiency; on the other hand, supervision should be strengthened to prevent the release of false information and protect the relevant rights and interests of job seekers and employers.

In the long run, only by insisting on taking development as the basis and key to solving all problems, and striving to promote high-quality economic and social development, can the level of employment be effectively improved.