March, the key month to lift the restrictions against Covid 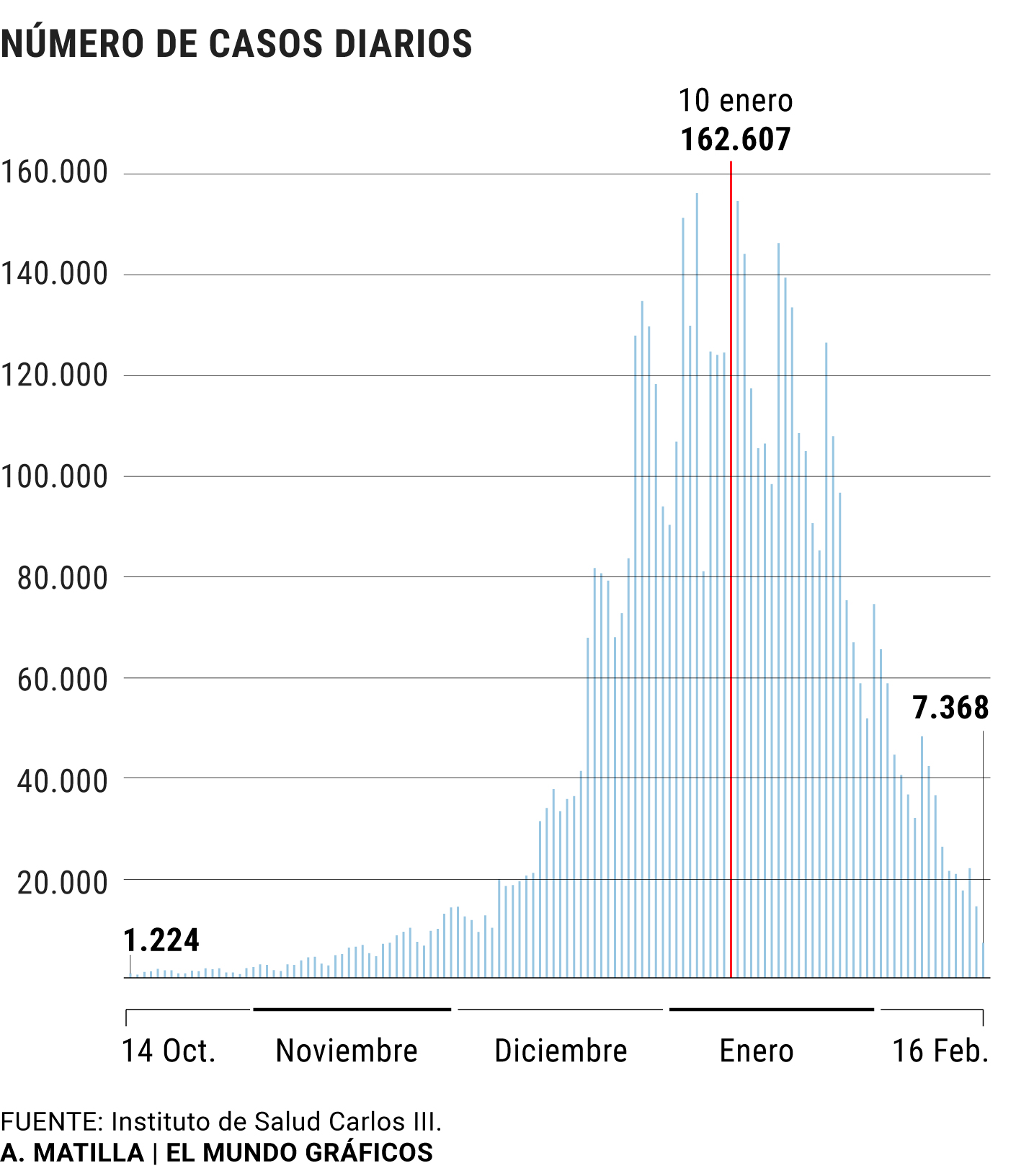 In one month, infections have dropped from more than 145,000 daily cases to just over 30,000 that were registered yesterday and the cumulative incidence of 14 days per 100,000 inhabitants has dropped from 3,397.60, which was the peak of this epidemic wave up to 919.48 yesterday, four times less.

With this abrupt drop in the figures, some experts venture to predict that, in two weeks, at the beginning of March,

: a cumulative incidence of close to 100 cases.

"This decline is taking place in the same way that it occurs in other countries," explains Jesús Molina Cabrillana, spokesperson for the Spanish Society of Preventive Medicine, Public Health and Hygiene (Sempsph).

This would be good news, since "

maintaining this incidence for a few weeks and lowering it even more at the gates of a new season, could be the opportunity to abandon certain measures

It is enough to remember that also in little more than a month the vertiginous sixth wave took place, pushed by the omicron variant.

From December 17 to the peak of January, the accumulated incidence multiplied by five, since it went from 511.00 to more than 3,300.

During this time, the reproduction number or contagion rate, the famous R, remained above 1.30 for more than two weeks.

The decrease in cases in Spain coincides with the global situation

The largest global wave of contagion from the pandemic, which began last November due to the emergence of the omicron variant, continues to decline after reaching its peak in January, with

although the deaths continue to rise, 4% in the period studied, as pointed out by the World Health Organization (WHO) in its weekly epidemiological report.

It should be noted that

The only region where there was an increase in cases was East Asia, where 1.5 million new positives were recorded and this represented an increase of 19% compared to the previous week.

For this reason, in most Western countries steps are being taken to restore normality and measures and restrictions are being eliminated.

Molina emphasizes that the steps taken in returning to the pre-pandemic situation are firm, "

what cannot be done is to be removing and setting standards. People are driven crazy and confused

. When the measures are lifted, they must be sure that you can. The month of March can be a good month for it, since it coincides with the change of season".

In this sense, referring to Denmark, the preventivist expresses that "

But he does see that in the medium term the masks, "which we must keep indoors, for the time being", can be relaxed or left "only for certain situations in which public spaces are shared, such as transport, large surfaces... ".

Molina Cabrillana agrees with pediatricians on the progressive liberalization of the mask in schools, but "always with caution and once we get the infection rates to be low and stay that way."

As for the mortality data, which is notable for being high in recent days, the preventivist assumes that

Thus, in the last seven days, according to the Health report, 664 deaths have been registered and 288 have been added from Thursday to Friday.

Spain, in a better position than its European neighbors

According to the latest data provided by Health regarding the evolution of the pandemic in several European countries (February 17), Spain has the lowest incidence, while the transmission record is recorded by the Netherlands, with 7,507 cases per 100,000 inhabitants. in 14 days.

In addition, the transmission in Switzerland is 4,091 cases;

"The drop in Spain is much more abrupt than initially thought.

It is good news, because it was not clear that it had this speed," explains Manuel Franco, spokesman for the Spanish Society of Public Health and Health Administration (Sespas), who maintains the prudence about the evolution in the month of March because "doing these calculations with omicron and without restrictions is complicated" and trusts in the impact of vaccination.

Covid-19The Danish "experiment": a return to normality with a record number of infections and less occupancy in ICUs

Covid-19Germany will not lift restrictions against Covid