Exceptional interactions with Erdogan's visit to Abu Dhabi... What has changed between yesterday and today?

The “Turkish President” hashtag topped the Emirati platforms with his first visit to Abu Dhabi since 2013. Activists, through the hashtag “#Emirates_Turkey_Strategic_Relationships” welcomed President Erdogan, and turned the page on the differences between the two countries. 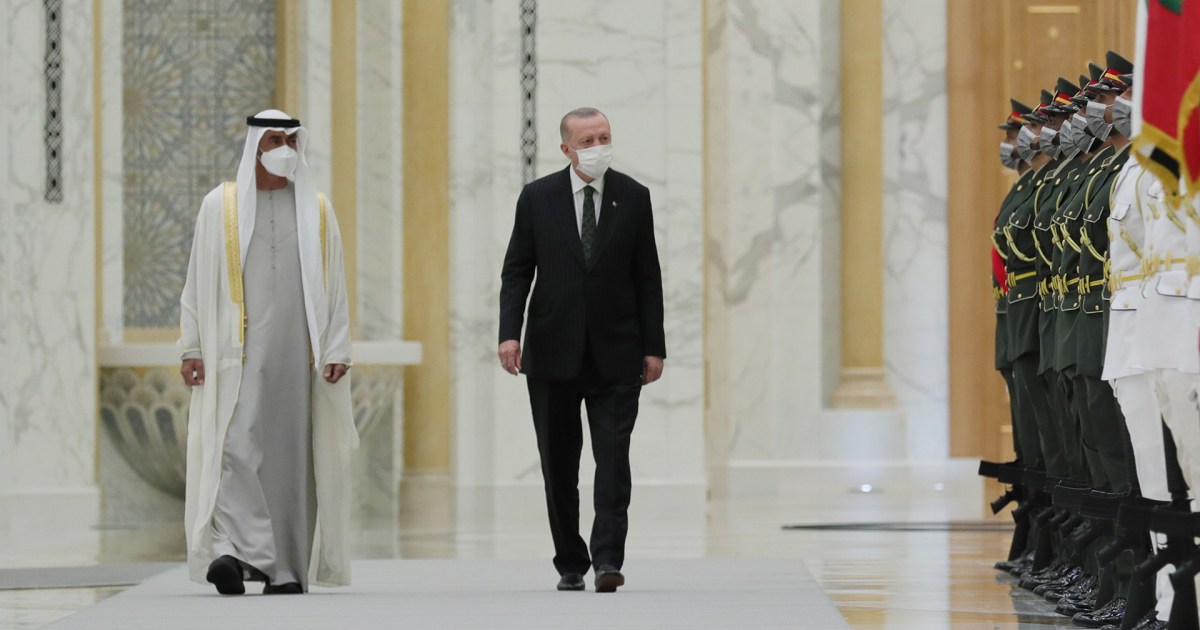 And the eighth bulletin "Nasratkom" (02/15/2022) continued the enthusiastic reception of the visitor, which was also the subject of discussion among the tweeters.

Abu Dhabi Crown Prince Sheikh Mohammed bin Zayed welcomed Turkish President Recep Tayyip Erdogan in a tweet in which he said, "I welcome His Excellency Turkish President Recep Tayyip Erdogan to his second country, the UAE... I was pleased to talk with him about our bilateral relations and our common interest in developing and expanding them, as we witnessed the exchange of agreements and memoranda Understanding in many vital fields with the aim of continuing closer cooperation between the two countries.

During the visit, Turkey and the United Arab Emirates signed 13 agreements covering areas, including investment, industry, advanced technologies, defense, transportation, health, agriculture and culture. The two countries also signed a joint statement on the start of negotiations for the Comprehensive Economic Partnership Agreement between them, and a letter of intent related to the start of cooperation meetings in the field of defense industries. .

Communication platforms witnessed a varied interaction with Turkish President Recep Tayyip Erdogan's visit to the UAE, where the Emirati academic Abdul Khaleq Abdullah said in a tweet to him, "President Erdogan's visit to the UAE is historic, and its goal is to establish 10 years of cooperation instead of tension, communication instead of estrangement, and opportunities Promising instead of lost opportunities in a region that went through 10 lean years that ended with neither winner nor loser, the lesson: whoever advances towards the Emirates is a step forward, the Emirates takes 10 steps.”

As for the academic Abdullah Al-Shayji, he wrote, "The first and only constant rule in international relations is that it changes and fluctuates and needs to be reviewed and evaluated from time to time. No friendship or rivalry lasts... Even interests change and fluctuate according to regional and international changes and the capabilities of countries."

In turn, former UAE Minister of State for Foreign Affairs Anwar Gargash commented, "The UAE sees cooperation and integration in the economic and development fields and the positive repercussions of this on the countries and peoples of the region as a main tool for managing various issues wisely and in a way that strips our region of the character of continuous escalation and its negative effects on the development and renaissance of the Arab world." and the Middle East".

As for the former Yemeni minister, Saleh al-Jabwani, he said, “Erdogan’s reception in Abu Dhabi with Ibn Zayed has many indications. As he is a friend of Iran, he has now become a friend of Turkey, and as he is the lover of America and Israel, he has become a dear friend of Russia and China. He does everything and satisfies everyone to keep his hand free. in southern Yemen, and no one objects to what he is doing in this strategic spot!”