Only a little over four days have passed since Antonio Resines was discharged from hospital after being hospitalized for almost 50 days, 36 of them in the ICU, and Antonio Resines has returned. No... 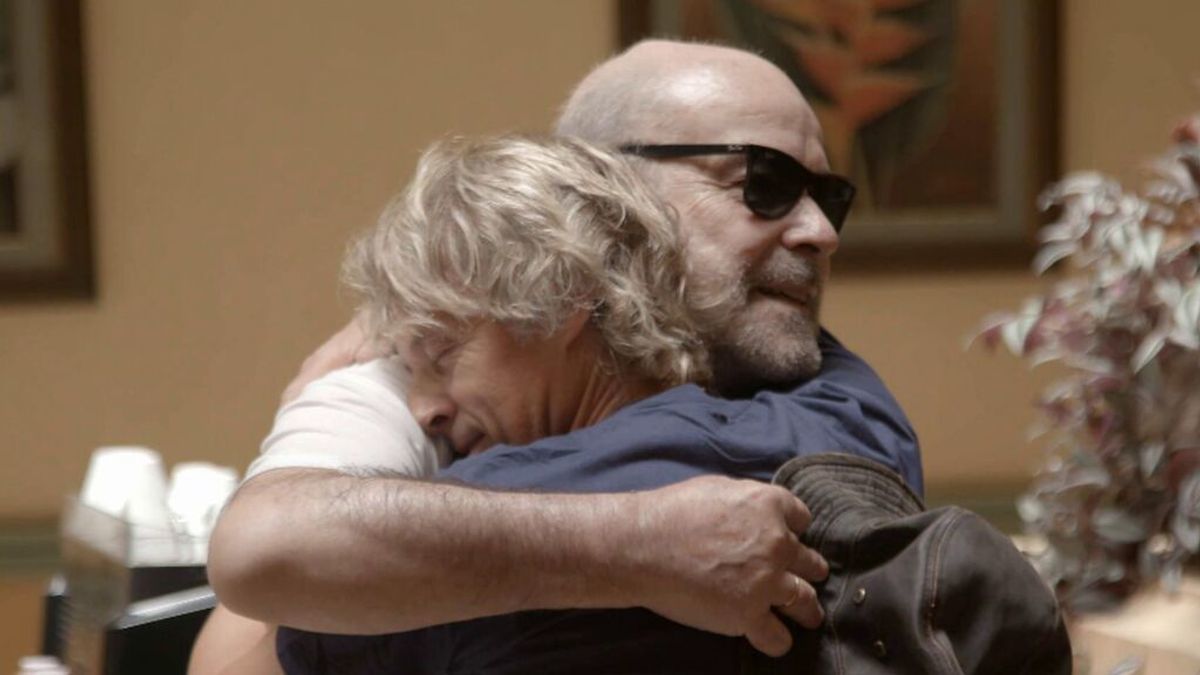 Only a little over four days have passed since Antonio Resines

was discharged from hospital

after being hospitalized for almost 50 days, 36 of them in the ICU, and

He could not be anywhere else than in

, the program in which he has collaborated for several seasons, and it could not be any other way than coming back, thinner, but with the essence of always.

"I thought it had been 5 days and when I woke up I scared the shit out of me,"

broadcast the program recorded with

before his admission), but in which the actor wanted to return to everyone's surprise.

and very regular when

was in the hospital and today

who, before giving way to last night's guest at

Before beginning the interview with the musician,

much thinner and noting that he couldn't talk much because he got tired, but the

Pablo Motos, to Resines: "We've had a hard time"

The joy was not only for the viewers, whom

has had on edge during these 50 days, but for the program itself.

had already disconnected: "We were all scared and there was a moment when things were complicated. You love someone but when suddenly you think he's leaving you realize you really love him".

No drama, no show, just to show that he was fine, that he has a long way to go and that he hardly remembers anything.

Well, yes, he remembers the professionals at Gregorio Marañón, Public Health and how they have saved his life.

"You have to support the Health as it is

"I was in another parallel world that had to do with reality, but it was a very strange world.

It is very bad

. Later, talking to others, I learned that it has happened to everyone. The good thing is that there are people who study and who leave their lives to save you. There were 14 shifts. Of the 95 that we were when I entered, we have saved 80 ", revealed the actor, visibly moved and very, very, very grateful.

briefly explained - "I can't talk much because I got tired very quickly" - how it all happened.

and had tested negative in the test that the program performs every day on collaborators.

The next day, he goes to shoot with

and has "a little fever."

A PCR test is positive and at first he was fine, but as the days went by his condition worsened.

"(...) the following week was a debacle. I couldn't stop coughing and I had trouble breathing. They took me to the hospital and I don't remember anything anymore. I thought it had been 5 days and when I woke up,

Trying to remove a bit of iron from the matter,

not only expressed the affection that people have for

, but also tried to see the glass half full with weight loss.

that we like, the one with the blows, the

this Sunday and the first thing he said to him was "

, you bastard": "You are hypervirgorexic", he

between jokes, but revealing that after almost 50 days in the hospital and after passing the

"It is true that in all this time, in which people are increasingly at odds, but there was unanimity that everyone loves you and that is awesome. We have had a hard time here. First you answered the messages and then you no",

, enduring the pull of emotion, reported that as soon as they admitted him they took away his cell phone "to save strength."

"I was wearing myself out and using air that I needed," he said.

said, "have had a hard time" for him.

It was the joy of the night.

A joy that, as

, it is the demonstration that

The sooner the better.

Antonio Resines, in Planeta Calleja: "I value being alive more"

Because what was planned last night was to see

, in the last television program that he shot before he was admitted and that Mediaset kept waiting for the actor to be discharged.

It was also going to be a joy because here, without Covid, without hospitals, without scares,

of pure strain was there.

who goes to Costa Rica to live an adventure with

, but he goes with his wife because she doesn't trust a hair and she is afraid of him.

who agrees to ride a canoe surrounded by caimans and who, despite his vertigo, climbs on a zip line and almost scares

who refuses to go down a 50-meter waterfall, who says so without hesitation whether the microphone is open or not, and who decides, without cutting a hair, that he stays on the shore "doing a Bertín."

's birthday , that gives him a t-shirt and that takes him to a spectacular resort that not even

had imagined in his wildest dreams.

who has no share in confessing his ideology or in recounting the intimacies of the bedroom.

that has made him so loved.

The only one, the incomparable.

not like nature, he does not get along with animals, nor does he like extreme adventures, but if

intercedes for him to go with

to the heart of Costa Rica,

swallows his fear and it goes

And as Jesús Calleja

with his guests, actually friends, the adventure is an excuse for the character to open up and let the person see.

it was not difficult.

does not shy away from any question or challenge.

last night it was possible to meet

who met his wife at a traffic light, the

who sleeps in separate rooms because he can't stand his wife's snoring, the

who values ​​life more than that we could imagine.

recounted the scares that life has given him.

The actor told after a motorcycle accident he went to the emergency room with a broken hand, they discovered that he suffered from anemia, they sent him a colonoscopy and they found a tumor.

"The doctor told me: 'I'm going to give you good news and bad news. You have

, but he is very well situated,'" the actor said.

The actor overcame it by going through the operating room, it has not been reproduced again, but he does check-ups every year to prevent it.

A blow that changed his way of seeing life: "I have realized what a comb is worth.

I value being alive much more,

you don't think about it before.

I have seriously begun to appreciate that, although I'm scared up here, it's fucking crazy here.

I have no desire to lose this."

hours before the broadcast of the program, "we are very happy with your recovery, friend

! What a better tribute!"

Well, that, there is

for a while, in Costa Rica, in El Hormiguero or wherever.

KO of Pablo Motos in the fight Miguel Ángel Revilla vs. Abel Caballero

Simeone and his only "no" to Pablo Motos