A few years ago, the number of caesarean sections performed in Spain and their consideration regarding whether they were many, few or normal could be approached from a... 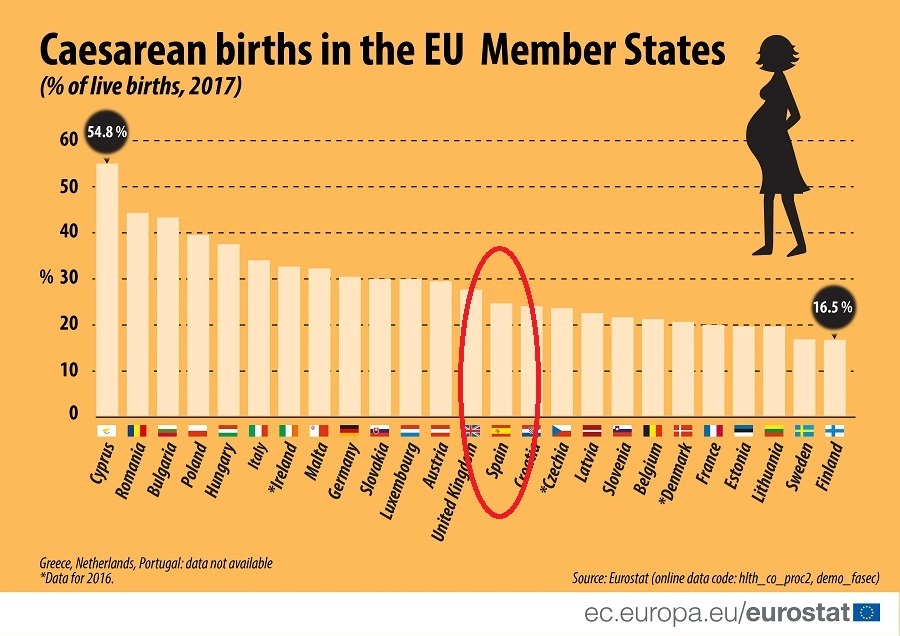 A few years ago, the number of

performed in Spain and whether they were many, few or normal could be approached from a strictly medical point of view.

With data, with the National Institute of Statistics (INE), with the World Health Organization (WHO)...

Now the concept of

has been incorporated into the debate and, suddenly, the approach to this issue has become sharper and more dangerous.

Obstetricians deny the majority, since it involves accepting an intention to cause harm that they reject, while some women's groups consider it a reality that sometimes deprives them of deciding about their own body.

Be that as it may, the first thing, the numbers.

75% were by natural or vaginal delivery and 25% by

These figures, 'grossly mode', have remained in that proportion for years and exceed the recommendations of the WHO, which considers the ideal rate of caesarean sections between

If we look at Europe and the OECD, Spain is in the middle of both tables, between figures that exceed 50% of

) and those of those countries that do not reach 20% (in descending order: France, Estonia, Lithuania, Denmark, Finland, Sweden, Iceland, Norway, the Netherlands and

the judicialization of obstetrics

Dr. Juan Luis Delgado is president of the Perinatal Medicine Section of SEGO, the Spanish Society of Gynecology and Obstetrics.

In his opinion, the reasons for a cesarean section cannot be attributed to medical factors alone.

"Society is changing: on the one hand,

women are making more and more decisions and on the other, we are experiencing an increase in lawsuits because there is less tolerance for adversity. People look to blame when things don't end as expected", he says.

Delgado explains that in a context of late and highly calculated motherhood, pregnancy has become highly idealized and is surrounded by a procession that hides a reality: both pregnancy and childbirth, even though they are physiological processes, can lead to dangerous situations for the baby. and for the mother.

So much so, he explains, that they are the cause of many hospital emergencies.

"We obstetricians are under a lot of pressure. On the one hand, because of the accusations we receive of obstetric violence and, on the other, because of the judicialization of our specialty. This has led to an

He not only points out to professionals that "to avoid problems if something goes wrong they have to do more cesarean sections", but there are women who demand them because they feel safer than before a vaginal birth.

Is childbirth so dangerous?

And here comes the story.

Andrea Ros is the creator of the Madremente support community for mothers and a perinatal promoter.

In his opinion, the narrative surrounding pregnancy and, above all, childbirth, is dominated by violence, terror, pain... "A natural process, suddenly, has become dangerous and, without medical causes that they advise it,

one more option to be born

. And let's not forget that it is a major surgery, "he warns.

She complains that women are often not informed of the risks involved in an intervention like this and for her, in a natural childbirth

, there are too many gynecologists and not enough midwives: "Obstetricians have little training in the physiology of childbirth, because They study pathologies, yes, but they can arrive at a delivery room without ever having seen one," he says.

In line with the French obstetrician Michel Odent, he complains about the medicalization of childbirth, its excessive protocols, inductions, etc., since he considers them a direct path to dehumanization.

"When a baby is born, the

that we will ever have is produced and we bond with the baby. In a caesarean section this does not happen. If we continue like this, what will become of humanity? We are at a time to ask ourselves questions" says Andrea Ross.

to a pregnant woman in her 40th week of pregnancy.

Many of these inductions end in caesarean sections, as labor does not begin naturally.

Ros admits that after 40 the baby's risk of death multiplies by two.

"There are two deaths out of every thousand. If you only say 'double', the woman gets scared. Let's tell her that the risk goes up, but that she can control herself. Let's not infantilize them," she emphasizes.

And he settles: "If there is a risk, we also want a caesarean section. We are not unbalanced

Dr. Juan Luis Delgado explains that in Spain, the cesarean rate in private centers is around 45% and in public ones, which have audits that examine the numbers, it is around 11% in low complexity hospitals, and 18%- 20%, in those who receive the highest risk cases.

"To lower these figures, we have to

for convenience and assume that delivery times are long," he defends.

The doctor explains that two-thirds of

are performed for three reasons:

And right here, another melon opens: that of vaginal deliveries after one or two previous caesarean sections.

Nuria Martínez, coordinator of the El Parto es Nuestro association in Valladolid, tells Yo Dona about her life experience, in an almost obsessive quest to give birth naturally.

"We only defend being treated according to

and always respecting the woman's decision," she claims.

and the last two by vaginal delivery.

To achieve this, she had to fight

, that is, against the doctors: "In fact, in my city I couldn't because there is no public hospital in all of Castilla y León that would allow me to try it after two caesarean sections," she explains. .

Her determination, after a first caesarean section with many complications and a second one that she did not want and that caused her deep post-traumatic stress, led her to do

, as they call it in El Parto es Nuestro.

"We only ask that they let us make our decisions about our body," she concludes.

LifestyleIsabel II or Nicole Kidman, the mothers who have publicly disowned a child

ParentingHow to get your children to collaborate at home

BeautyThese are the 10 keys to achieving perfect eyebrows