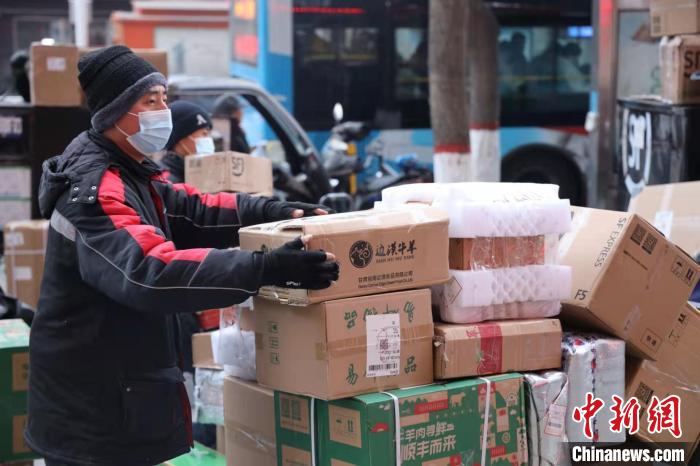 China News Service, Lanzhou, February 11th (Wang Muyu and Wei Yujia) "This year's New Year's Eve, not only the hometown New Year's vegetables, beef tendon, and bad meat sent by my mother, but also Hunan bacon sent by my roommate's family. I ate a North-South fusion meal. New Year's Eve dinner." Ding Rui, a "post-00" from Lanzhou, is still "Celebrating the New Year on the spot" this year, staying in the dormitory of Chengdu University for New Year's Eve, and planning to travel with friends after the holiday.

For the "Gen Z" young people, their Spring Festival is quietly changing.

In the Spring Festival of the Year of the Tiger, "original people" who choose to celebrate the New Year on the spot is still a popular word in the post-epidemic era.

With the "Generation Z" (those born between 1995 and 2009) becoming the new main force of consumption during the Spring Festival, chefs prepare dishes for New Year's Eve, travel together, national tide cute tiger New Year goods, script killing, accompany pets for New Year's Eve, Cloud reunion and other keywords have become the key words of Houlang's "New Year's Goods List". In the Internet era, they are gradually reshaping the New Year's customs. The new experience brought by "on the cloud" also fills the offline sense of ceremony, and constantly Inherit and renew fireworks.

For the second Spring Festival abroad, this year's New Year's Eve, Ding Rui is no longer lonely and at a loss as last year. In her opinion, "instead, she enjoys and cherishes this rare alone time."

"Chengdu is a modern international metropolis. During the Spring Festival, there are still many places suitable for young people to gather and go shopping." Ding Rui said frankly that the local New Year's festival has made the city continue to be prosperous and lively in the past, and spending time with friends also dilutes homesickness. thoughts.

Guo Xiaodong, a "post-00" from Xinyang, Henan Province, after graduating from university in 2021, went to Lanzhou New District to start a business to seek opportunities and engage in the flower economy. Affected by the epidemic in his hometown, he chose to stay in Lanzhou for the New Year.

For a person's Spring Festival, the New Year's Eve dinner has also become a simple dinner.

"It's the first time to celebrate the New Year alone, and I still feel a little lonely. Fortunately, I have the hometown New Year's goods that I bought on the Internet to accompany me." Guo Xiaodong said that during the Spring Festival, he deliberately bought his hometown's cooked chicken and traditional Xinyang dishes from Taobao. The family also sent new clothes and new year goods, which warmed my heart, and the "cloud reunion" with family members through mobile phones is even more precious at the moment. The Internet makes this family love not discounted.

Lai Yong, deputy general manager of the delivery department of the Lanzhou branch of China Post Group Corporation, said that people who work and live in other places and cannot go home for the New Year will send New Year gifts to their homes, and more and more young people buy New Year gifts online.

"Where to go to play" has also become an "important little thing" during the Spring Festival of "Gen Z".

Li Xiaofei, a "post-00" from Pingdingshan City, Henan Province, is a third-year student at the School of Life Sciences of Lanzhou University. She didn't feel uncomfortable when she didn't go home for the New Year for the first time. Choosing to go skiing with her senior sister became her "New Year's New Challenge".

"It can be considered a close date with the Winter Olympics." Li Xiaofei said that before the Spring Festival, she also went to the supermarket to buy Lanzhou specialty Sanpaotai tea to send to her family as a New Year's gift for her parents to visit relatives and friends.

Wang Shuwei, a sophomore from Lanzhou Jiaotong University, lives in Huidong, Guangdong, and will stay at his uncle's house in Lanzhou for the Spring Festival this year.

During the Spring Festival, she followed her sister, who works in the media, to flower markets, museums, and temple fairs to "run interviews", go shopping and watch movies... she was very busy.

"My New Year, I call the shots" has become the new definition of the traditional Spring Festival for today's young people.

Fliggy data shows that orders for ice and snow tourism-related products during the Spring Festival in the Year of the Tiger have increased by more than 30% compared with last year's Spring Festival.

During the Spring Festival, the order volume of "ice and snow + hot spring" combination products increased by more than 40% year-on-year.

Ma Busheng, director of the Cultural Research Institute of the Gansu Academy of Social Sciences, analyzed that the Spring Festival?

The festivals of the times, nowadays, the form of the New Year has undergone many changes.

The new generation basically has no life experience in the agricultural era. For the "Generation Z" group, the New Year is a festival, and it is normal for them to choose a way to celebrate the New Year that suits them.