The 20th Golden Eagle Film Awards ceremony took place in Moscow. The triumph of the evening was Mikhail Lokshin's film "Silver Skates": it took prizes in several categories, including the main one - "Best Film". Gleb Panfilov received the award for directing, while Filipp and Ivan Yankovsky left the stage with statuettes for Best Actor and Best Supporting Actor, respectively. About these and other laureates - in the material RT. 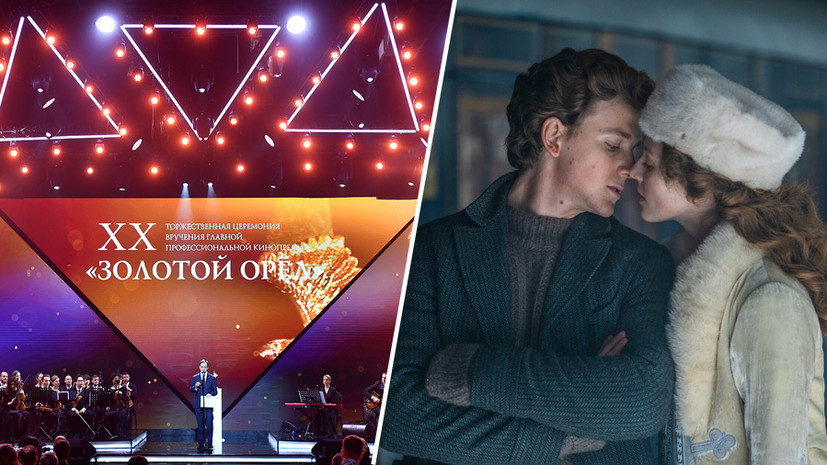 On Friday, the 20th award ceremony of the National Academy of Motion Picture Arts and Sciences of Russia "Golden Eagle" was held in the first pavilion of Mosfilm.

The ceremony was opened by Assistant to the President of Russia, Chairman of the Russian Military Historical Society Vladimir Medinsky.

He read out a greeting from Vladimir Putin.

The award in the main nomination, "Best Film", was won by Mikhail Lokshin's adventure melodrama "Silver Skates". Igor Grinyakin, who worked on the visual component of this picture, received the prize for the best camera work, and Roman Kantor, who was responsible for the script, for the best script. The award for the work of the production designer went to another creator of Silver Skates - Alexander Zagoskin. The same film (namely, Tatyana Patrakhaltseva and Galina Solodovnikova) took the figurines in the nomination "The best work of a costume designer." In total, the film was presented in 12 nominations.

The film takes place in Christmas Petersburg at the turn of the 19th and 20th centuries.

The main character is a young man Matvey, the son of a lamplighter.

He lives with a sick father and barely makes ends meet, and on the eve of the winter holidays he loses his only income.

Desperate, the young man joins a gang of thieves skating through the city's canals.

"Julius and the Great Leaps" was recognized as the best animated film.

Gleb Panfilov, who last year released the film "Ivan Denisovich" based on the famous story by Alexander Solzhenitsyn, received the award for best director.

Philip Yankovsky, who played the main role in this film, was recognized as the best actor.

His son Ivan Yankovsky took the statuette for the best supporting actor in the film "Fire".

The film by Alexei Nuzhny (“I'm losing weight”, “Speakerphone”) tells about the activities of a rescue team engaged in extinguishing forest fires.

Nikolai Kulikov (Legend No. 17, Crew) and Konstantin Mayer (I'm Losing Weight) worked on the script for the picture, together with Needy.

The Golden Eagle for Best Actress went to Maria Aronova, who starred in the fantastic melodrama Couple from the Future.

Honorary "Golden Eagle" for his contribution to Russian cinema was awarded to the People's Artist of Russia Sergei Shakurov.

For the first time, there was an award in the nomination "Best Series of Online Platforms".

The Seventh Symphony became the best television series, and the lead actor Alexei Guskov received the award for best male role in this tape.

The National Academy of Motion Picture Arts and Sciences of Russia established the Golden Eagle Award on March 4, 2002.

The presentation took place at the Mosfilm film studio the same summer, during the 24th Moscow International Film Festival.

Then the award outside the nominations was awarded to directors Andrei Tarkovsky and Bernardo Bertolucci, animator Fyodor Khitruk, actors Tatyana Samoilova and Georgy Zhzhenov, as well as composer Michel Legrand.

For the first time, the Golden Eagle award ceremony took place in January 2003 in the first pavilion of Mosfilm, where the award is held to this day.

Then the main prize was taken by the picture of Alexander Rogozhkin "Cuckoo"‎, the same film won the nomination "Best Screenplay" and "Best Director's Work", and the actor Viktor Bychkov, who played in it, received the "eagle" for the male role.

In theory, any publicly shown tapes can claim the main "Golden Eagle".

For this, foreign films must be released in Russian distribution.

Series and mini-series need to be on the air to be considered.

Members of the Academy determine the winners of the "Golden Eagle" in two rounds.

But before that, a specially formed expert council draws up recommendation lists for all categories.

At the first stage, members of the academy conduct a secret ballot - they choose five films that claim the main prize, and three films each for the remaining nominations.

The second stage is held the day before the solemn ceremony - then the academicians also, by secret ballot, elect the laureates.

In 2021, the winners of the Golden Eagle were named on January 22. The main prize was given to Andrey Zaitsev's film "The Blockade Diary", it was also awarded the "Golden Eagle" for the best script. In the main nomination for documentaries, Victor Tkachev's The Space of Verse: Boris Slutsky won. Nadezhda Mikhalkova's film One Mango, Please received the award as the best short film of 2020. The best animated film was the work of director Dmitry Geller "The Mistress of the Copper Mountain". Sam Mendes' drama 1917 won in the Best Foreign Film at the Russian box office nomination.

Yura Borisov was awarded the Best Actor in a Film Award for his performance in the biopic Kalashnikov.

Maxim Matveev ("Trigger") took the prize for the male role on television, and Svetlana Nemolyaeva ("Diplomat") for the female role.