CAN 2022: Tom Sainfiet, a fighter in the service of The Gambia

The Gambia coach, Tom Sainfiet, who challenges Cameroon in the quarter-finals of CAN 2022 this Saturday, traveled around the world for a long time before setting foot in Banjul where his… 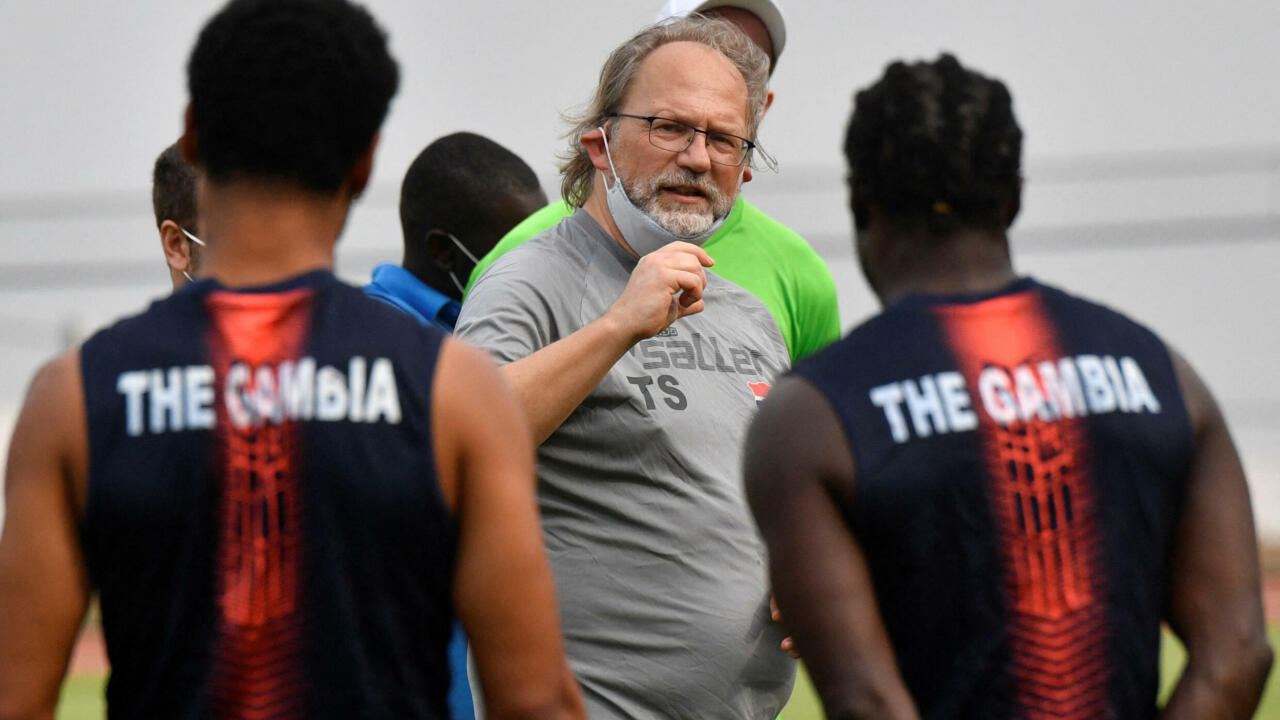 CAN 2022: Tom Sainfiet, a fighter in the service of The Gambia

Tom Sainfiet in the middle of his Gambian players during a training session in Buea, January 14, 2022. AFP - ISSOUF SANOGO

The Gambia coach, Tom Sainfiet, who challenges Cameroon in the quarter-finals of CAN 2022 this Saturday, traveled around the world for a long time before setting foot in Banjul where his know-how gave a new dimension to the selection of Scorpions.

From our special correspondent in Douala,

To see it up close, this Belgian, with mischievous eyes and an often mischievous smile, has found the formula of the magic potion to make his Gambians, who are playing their first CAN, irreducible Scorpions, ready to challenge the Cameroonian giant in quarter-final of the CAN 2022. Otherwise how to explain that a team, which remained without a win from 2013 to 2018, 150th in the Fifa ranking, finds itself in the quarter-finals this Saturday January 29, 2022 after a course of old veteran: three victories , a draw, only one goal conceded?

“Cameroon is under pressure”

The Belgian scientist's secret can be summed up in three words: "

the work, time and talent

“I have been working with the team for three and a half years, we drew twice (1-1) against Algeria, future African champions in the CAN 2019 qualifiers. We won against Morocco in a friendly match (0-1)

And in this CAN, we only played against big teams.

Enough to be confident and ready to look eye to eye at the Indomitables of Cameroon, the best attack of the tournament (9 goals).

We are not afraid!

The Gambia has everything to gain,

I think Cameroon is under pressure.

They play at home and everyone thinks they are going to be African champions.

We have already created a surprise against Tunisia (1-0) and Guinea (1-0), we can do it against Cameroon

CAN 2022: Gambian Darboe tells his story, from migrant to player coached by Mourinho

At 48, the Belgian technician has rolled around enough not to be impressed by the Cameroonian selection even if he estimates "

" the chances of victory for his Scorpions.

And with Saintfiet, anything is possible, as his eclectic career as a coach shows.

The adventurer has worked in 21 countries around the world and Gambia is his 10th African country.

For the first time, he remained in office for more than two years.

An eternity compared to his experiences in Zimbabwe (2 months), Jordan (4 months) or Ethiopia (5 months).

I want to go to Yaoundé

It must be said that under his jovial looks, distributing smiles and good words, Tom Saintfiet often knows how to get his message across. His exit on the rooms offered to his staff, was described as "

" by his Federation, but had time to trigger a controversy and the ire of the African Football Confederation (CAF).

Tom Saintfiet knows better than anyone that the great stories in football are written by the so-called little thumbs.

He is inspired by it to motivate his players through videos.

During the first match against Mauritania (1-0), he showed his Scorpions Denmark's victory at Euro 1992. That of Greece at Euro 2004 was viewed to prepare for the match against Mali (1 -1).

And the feat of the Zambians at CAN 2012 was projected to galvanize his troops for the match against Tunisia (1-0).

Against Cameroon, there will be "

A film certainly inspired by the legend of David against Goliath.

One thing is certain, after having seen Limbé, Baffoussam and Douala, Tom Saintfiet “

wants to go to Yaoundé as well

If that's not a warning to the Lions...