CAN 2022: Mbappé I, the legend of the "Marshal" and broken posts

It was the first of the "big lions", the best for Roger Milla. At the time when, in Cameroon and in Africa, football was first and foremost a game, its master was called Samuel Mbappé Leppé. Mbappé co… 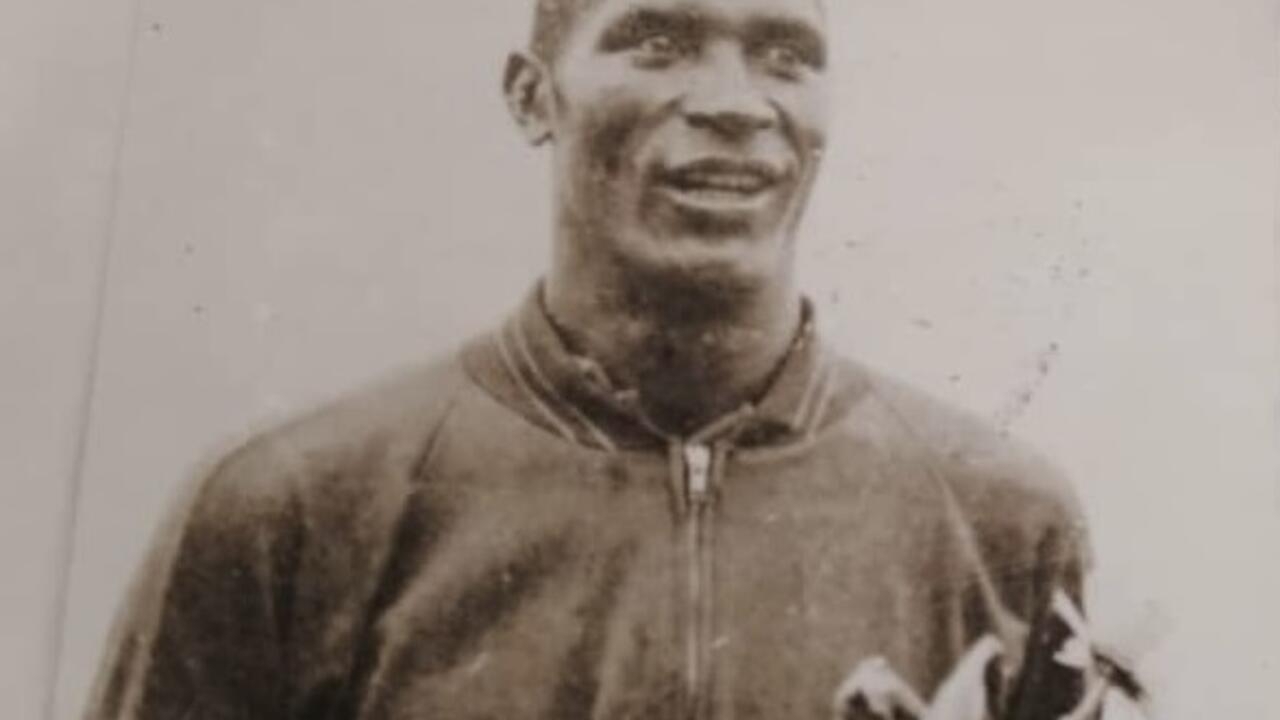 CAN 2022: Mbappé I, the legend of the "Marshal" and broken posts

Samuel Mbappé Leppé, trophy of the first African Cup of Champions Clubs in his hands.

Excerpt from a press clipping.

It was the first of the "big lions", the best for Roger Milla.

At the time when, in Cameroon and in Africa, football was first and foremost a game, its master was called Samuel Mbappé Leppé.

Mbappé as Kylian, Leppé as Pelé, the King, upside down.

A brilliant midfielder, charismatic captain of the selection in the 1960s, who disappeared into poverty one Christmas day in 1985. The absence of videos, the sometimes extravagant accounts of his feats and his alleged affiliation with the champion of the French world today make the "Marshal" a legend in the proper sense, a myth fantasized and recently celebrated.

From our special correspondent in Cameroon (with Christophe Jousset),

Douala, this January 12, 2022, a few days after the kick-off of the CAN in Cameroon. There is a crowd in front of the Mbappé Leppé stadium. In the background, bugles and trumpets announce the event: the new statue of the former captain of the Indomitable Lions is unveiled, the first, installed a few years ago having been vandalized, for obscure reasons. In the audience, former glories of national football, Roger Milla in the lead, and local authorities.

(Cameroonian Football Federation), celebrates "the historical figure who inspired modern football in Cameroon". But 48 hours later, surprise, the bronze monument is removed to be refined: we did not find the features of the "Marshal" and his intriguing resemblance to his famous namesake. "

A few minutes of walking in the streets of the capital, equipped with a photo montage of Kylian and Samuel Mbappé side by side, allow us to make a quick observation: 36 years after his final retirement, few Cameroonians can put a name on the face of the "Marshal".

On the other hand, everyone guesses a filiation with the striker of the Blues, whose father, Wilfried, also from Douala, was born more or less when the career of Samuel Mbappé Leppé ended.

The Mbappé Leppé Stadium, in the Akwa district, in Douala.

Verification made with the town hall of Douala, Samuel and

would be at best distant cousins, or perhaps simply two men with a common name and gift.

The comparison ends there. One became rich and famous thanks to his talent, the other, at a time when football was not a living, fell, his career over, into poverty and oblivion. In 2016, a little over 30 years after his death, he still received, posthumously, the distinction of "African legend", awarded by CAF, the Confederation of African Football.

recalls Emmanuel Barranguet, AFP journalist and child from Yaoundé - he lived there from 6 to 14 years old, between 1979 and 1987, several years after the end of his career. of the player. “

Like Leônidas the Brazilian, Mbappé Leppé is a legend that we have never seen play. In Cameroon, television did not exist before 1985 and the arrival of Pope John Paul II

“, recalls Barranguet, who had made himself, without a photo, but by dint of testimonies, an image of the myth: “

They said that he had bowed legs, and that he was very tall, strong, powerful, so I saw him a bit like a cowboy.

There is a kind of magic around him, with this nickname "Marshal".

Finally, it is a myth and it is perhaps even more beautiful not to have a video document.

Everyone can imagine it

It was a living monument

One can also easily imagine the influence of the player, captain of the Indomitable Lions and the Oryx of Douala, the terror of Cameroonian football in the 1960s. With this club, he won the national championship several times, as well as the first edition of the African Cup of Champions Clubs, in 1965, after a victory in the final, in Accra, Ghana, against the Stade Malien of Salif Keita.

When Mbappé Leppé's Oryx came to play with us, in Bafoussam, against Racing, the city club, it was an event

We did everything to attend the match, even if it meant disobeying the parents or taking risks

Mbappé Leppé was the attraction, like Salah or Mané today. I feel privileged because I saw it with my eyes before falling blind

", continues the interpreter of the tube

I go to Yaoundé

, for whom the "Marshal", with his charisma and his genius, was the "

Like the legendary Jazzman, Samuel Mbappé Leppé could have had an international career if he had wanted to.

It was a living monument.

When we went to play away with the national team, foreigners talked to us about him

I remember a meeting in Congo where I t was going for the first time, we were training at the Félix-Eboué Stadium and the Congolese were telling us: this is the stadium where Mbappé Leppé broke the posts.

The man who broke the wooden poles

An overpowered ball strike, capable of breaking the wooden posts (the phenomenon would have happened several times), this is for many the main technical characteristic of Samuel Mbappé Leppé. Joseph-Antoine Bell can testify to this: at the twilight of the career of the "Maréchal", he began his own at the Oryx in Douala. Between the two, a bond is formed, the former takes under his wing the young hope. “

He was a great player and a great gentleman

He taught me humility and discipline. His big quip was to wonder if I could have made a career as a goalkeeper in his heyday, his shots were so hard to stop

We talk a lot about his power, but Mbappé Leppé was a very complete player

good from the head, to the foot, in recovery, recovery, vision of the game, strong but capable of finesse, and above all an

A winner unfortunately won by vices after his career.

He drinks and spends too much, does not always go to work "

", specifies Joseph-Antoine Bell, for whom, not to mention money at a time when the football was first and foremost a hobby, Mbappé Leppé did not receive "

An anomaly in the process of being corrected, and Bell concludes with an anecdote: "

One day, the Oryx of Douala plays a cup match, in Buea, against a modest second division team and struggles to get rid of its adversary. A penalty is whistled, and of course Mbappé Leppé takes it. He advances, impressive, with his large size, puts down his ball, then moves back very, very far, to gain a lot of momentum. The opposing goalkeeper knew this reputation as a post breaker like everyone else, and he said to himself

"provided he doesn't break me"

. By the time the Marshal got to the ball, the goalkeeper was lying on the ground (laughs) so he didn't need to work hard to send the leather into the net. Strength and finesse, that was Samuel Mbappé Leppé. »

► The audio version of this report can be listened to or re-listened to on the Mondial Sports program on Saturday January 22, 2022.