What we saw in the genome analysis of the new Corona Omicron strain patient ...

[NHK] "Omicron strain" whose infection spreads rapidly. A doctor at Tokyo Medical and Dental University, who specializes in virology, analyzes the genome of inpatients of the Omicron strain ... 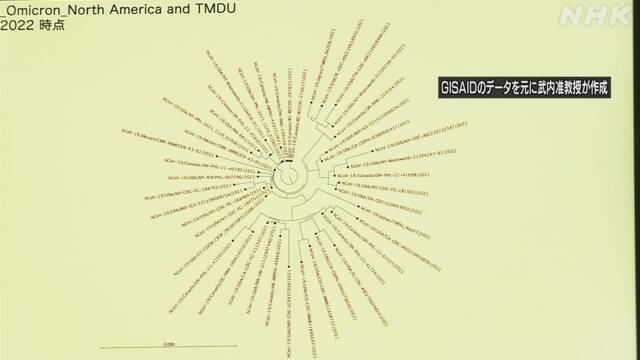 A doctor at Tokyo Medical and Dental University, who specializes in viral science, conducted a genome analysis of inpatients of the Omicron strain, and found that there were multiple types of the same Omicron strain with some different mutations, as well as Delta strains. It means that the mutation at the same place as the mutation that is said to be prone to pneumonia was confirmed in this patient.

"It's too early to conclude that the Omicron strain will not be severe, and we still need to look carefully," doctors said.

Associate Professor Hiroaki Takeuchi of Tokyo Medical and Dental University, who specializes in virology and is advancing gene analysis of the new corona, analyzed the genomes of four inpatients of the Omicron strain.

As a result, none of them was spread in South Africa, Europe, or Asia, but in North America.

However, even in the same North American strain, the mutation site was divided into two types with some differences, so Associate Professor Takeuchi is constantly mutating the Omicron strain and will analyze which strain will become mainstream in Japan. It is said that it is necessary.

Associate Professor Takeuchi said, "If you know where the epidemic will flow in and become mainstream, you will be able to sharpen the quarantine system at the airport. It will also be information that will lead to the choice of treatment method. "

The symptoms of Omicron strain are ...

Also, how much do you know the symptoms of Omicron strain?

According to Associate Professor Takeuchi, a mutation in the same location as the mutation in "P681R", which is said to be more likely to cause lung inflammation in the Delta strain, was also found in patients with the Omicron strain, and a mutation called "P681H" was confirmed. That is.

This mutation has been shown to be prone to pneumonia in animal studies.