Experts in each field have revealed the secret to getting rich. In SBS 'All The Butlers' broadcast on the 16th, economists exchanged opinions about the right investment. 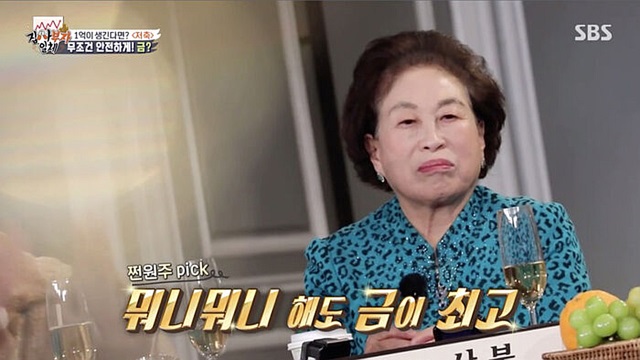 Experts in each field have revealed the secret to getting rich.

In SBS 'All The Butlers' broadcast on the 16th, economists exchanged opinions about the right investment.

On this day's broadcast, the members asked where they would invest if they had 100 million won in assets. In response, Master Jeon Jeon-ju said, "I will buy gold. Gold does not disappear and remains like a tombstone," and expressed his belief in gold, which has risen a lot more than in the past.

Then, GIMP Pro said that he would invest in stocks as expected. In particular, he advised, "There is a stock I wanted to buy," and "Invest in a fixed future." In response, the members asked for specific items, and Kim Pro explained, "Global funds will be focused on eco-friendly businesses. Eco-friendly businesses such as solar power, electric vehicles, and hydrogen cars will emerge." And he drew attention by paying attention to the revival of K content and paying attention to dramas, which are durable content.

Master Park Jong-bok said, "I will unconditionally buy a small building," and "I will invest because it is possible to have a house and an additional income." In response, Master GIMP showed interest in whether that was possible, and after receiving confirmation from the doctor who said that he could buy unconditionally, "Do you have a housing and rent?" It made me laugh.

And on this day, the teachers and members wondered what the real estate market would be like in 2022.In addition, all of them, except for Master Jong-Bok Park, predicted a real estate decline in 2022. However, Dr. Park predicted a modest uptrend.

He then predicted, "It will be completely divided into a rising area and a falling area. And the rising area will be beyond imagination." In addition, Dr. Park surprised everyone by predicting, "If the price bubble in the real estate market does not fall out next year or the year after, a more serious real estate crash may come after 2025."

In addition, he advised, "The price of a house for real residence is strong and the price drop is not large." Master GIMP also agreed with Dr.

Master Seung-Joo Kim said that he would invest 100 million won in coins and NFTs without any worries. "Now is the starting point for great growth," he said. "The founder of Twitter resigned as the CEO and went all-in on a cryptocurrency company, but it is speculating that the future business value will change to that extent."

In response, Master GIMP said, "Currently, Bitcoin is 60 million won, but 10 years from now, it won't be that price. It's likely to be 600 million or well below that price. I don't think it should be done," he said, telling him to be careful about investing in cryptocurrencies and NFTs.

Master Kim Seung-ju said, "Virtual currency is definitely an investment with potential. However, it is possible to invest rather than speculate if investment is made after studying ahead of time.Everyone is only interested in specific investment-related information, but is indifferent to real information such as technical value,” he emphasized when investing in virtual currency.

Lastly, GIMP garnered attention by advising, "You have to keep your business and invest. Investment is an investment. Since it's a lifetime thing, you need to protect your main job and your business to make the right investment."