Winter Olympics-themed film and television variety shows get together to "new", is it difficult to make new ideas?

China News Service Client, Beijing, January 13th (Reporter Yuan Xiuyue) The TV series "Beyond" recently appeared on "News Network", and #wuhaicesnowfun Games# appeared on the hot search list on Weibo... 2022 will start, and China will run Entering the "Winter Olympics time", film and television and variety shows have also begun to feature ice and snow sports.   The reporter sorted out and found 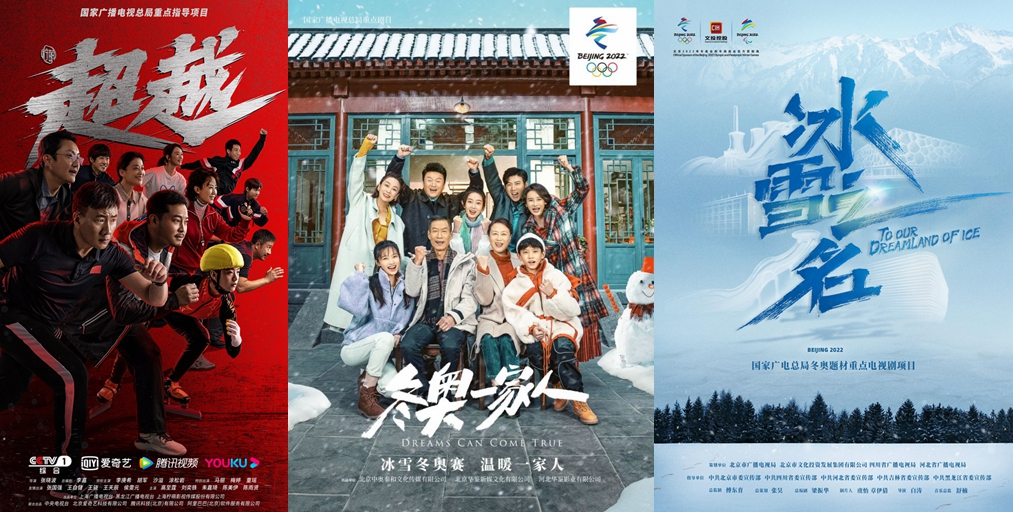 Then, how should literary and artistic works show the beauty of ice and snow sports, and who can stand out?

The true reproduction of competitive sports in the play resonated with everyone.

"Beyond" is aimed at the popular ice sport - short track speed skating.

The background of the play is set when Beijing successfully bid for the 2022 Winter Olympics in 2015. It tells the story of a roller skating girl, Chen Mian, who passed all the way, and finally entered the national team as the main player, and went to the Winter Olympics to win glory for the country.

Short track speed skating is an absolute protagonist in many Winter Olympics-themed film and television dramas.

TV series "Winter Olympics Family", "The Name of Ice and Snow", movies "My Heart Flying", "Icebreaker" and "Extreme Spin" are all based on this theme.

Among them, "Winter Olympics Family" starring Liu Peiqi was created by the original production team of "Family with Children" and is a sitcom about the Winter Olympics.

"The Name of Ice and Snow" is divided into two parts, starring Chen Ruoxuan, Peng Xiaoran, Ou Hao, Liang Jie, etc., with the theme of "Forty Years of China and the Winter Olympics", telling a family's three generations of ice and snow love.

Part of the movie poster

In terms of movies, "My Heart is Flying", produced by Xu Zheng and starring Xia Yu, has attracted a lot of attention.

The prototype character of the film is Dayang Yang, China's first Winter Olympic champion. Director Wang Fangfang has directed many sports-themed films such as "One Man's Olympics" and "Xu Haifeng's Gun".

Directed by Ye Weimin, starring Han Geng and Yin Fang, and starring Wu Jing, Li Chen, and Jiang Wu, the movie "Zero Limits", with the theme of skiing, tells the story of skiers' careers after falling into a rock bottom.

Winter Olympics variety shows get together,

stars and athletes have a lot of fun

Compared with film and television dramas, the number of variety shows on the theme of the Winter Olympics has also ushered in a surge.

Recently, a number of video platforms and satellite TV have launched programs related to ice and snow sports, such as "Super Interesting Ski Conference", "Ice and Snow is Burning", "Friends in the Snow", "Southern Troupe Chasing Snow" and "Hot Snow Wave". "Champion to Champion", "Winter Dream 2", "Follow the Champion to Ski" and so on.

Judging from the content of the above programs, most of them focus on highlighting fun, participation and popular science, combining Winter Olympic sports with games and entertainment, and promoting ice and snow sports through personal demonstrations by star guests and athletes.

In "Ice and Snow is Burning", Li Chen, Wu Qilong, Wu Zun, Jiang Chao and Yu Yang served as "ice and snow managers", and the team leader of the program was composed of ice and snow athletes, and let "Winter Olympic Xiaobai" watch figure skating, ice and ice Kettles and other projects to popularize knowledge about ice and snow sports.

"Southern Troupe Chasing Snow" cuts in from the difference between North and South, allowing southern friends to truly experience a piece of ice and snow culture.

There are also several programs that focus on competitive and professional communication.

In "Dream of Winter 2", Zhang Shaogang served as the host of "Winter Dream", Wang Meng was the "ambassador of Winter Dream", and Cai Xukun, Zhong Hanliang, Zhang Jike, Zhang Yuqi, Liu Yuxin and others joined as guests.

"Follow the Champions to Ski" let Winter Olympic champion Zhang Hong act as the "ice and snow team leader" to lead Li Wenwen, Su Bingtian, Fan Zhiyi, He Chong, Han Qiaosheng, He Wenna and others to learn to ski, attracting the attention of many sports fans.

In addition, CCTV has also launched a number of Winter Olympics-themed programs.

For example, "Take You to Watch the Winter Olympics", Zhang Hong and other guests took the audience to visit the Beijing Winter Olympics venues; "Olympics in Art" shows the Olympic culture and spirit from an artistic perspective; "Winter Olympic Landscape" and "About Winter" For documentaries, "Ice Hockey Whirlwind" and "Ice and Snow Dream Team" target the audience among teenagers.

With endless emergence, how can the Winter Olympics-themed literary and artistic works be innovative?

The addition of a large number of films and variety shows has contributed to the promotion of ice and snow sports.

From the perspective of communication channels, Winter Olympics-themed films and variety shows provide audiences with a different perspective, allowing everyone to learn about ice and snow sports in a more interesting and fresh way, and to further perceive the stories behind the Winter Olympics.

However, with so many files of content coming online together, how to make new ideas poses a big problem for the producers.

The reporter observed and learned that some of the Winter Olympics programs that have been broadcast are mostly carried out in the form of outdoor reality shows + ice and snow sports.

Some netizens also raised questions about the program mode, post-production, etc., and felt that some were "appropriate for the occasion" and "the production is a little boring".

In fact, this is also a problem that has existed in many outdoor reality shows in recent years.

In today's era of rapid Internet dissemination, reality shows are emerging one after another, and they are deeply loved by everyone for their entertainment and authenticity. It is quite difficult for outdoor competition programs to seize a place among them.

In recent years, although some online broadcasting platforms have made some "inclined" in this regard, it can be seen from the online evaluation that the audience is actually no longer satisfied with only watching "big scenes", or the stars are disregarding their images. In the program, I play games, and I hope to see creative and interesting content.

It's probably the same when watching the film and television works on the other side. It's better to fight the theme and the lineup than the story!

In this regard, it has remained unchanged since the early years.