The jokesmanship is deeply rooted in the hearts of the people! The first generation of "top class" in the police circle is here again

One summer, Chengdu traffic policeman Tan Qiao stopped a tricycle. The cart was full of twigs and firewood, with a person and a dog sitting on it. The uncle pulling the cart said that his father, mother, elder brother, wife, and children have all passed away, and only the younger brother sitting on the firewood is left. He is a fool. It seems that all the misfortunes in the world have fallen on 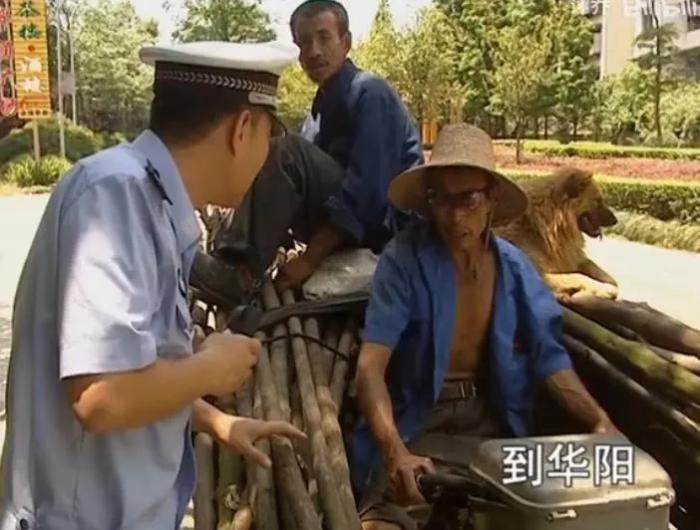 The cart was full of twigs and firewood, with a person and a dog sitting on it.

The uncle pulling the cart said that his father, mother, elder brother, wife, and children have all passed away, and only the younger brother sitting on the firewood is left. He is a fool.

It seems that all the misfortunes in the world have fallen on the uncle. Despite this, the uncle is still optimistic and positive, and said to Officer Tan: Look forward.

Uncle "Fugui" in the show.

This scene comes from "Tan Talks about Traffic", a program that shows the world's various forms of law popularization.

The host of the show, Officer Tan, has also become a popular "star" because of his humorous style.

After several years of silence, Tan Qiao, who took off his police uniform, "debuted" again.

Recently, in the challenge of "On behalf of driving in one day, Officer Tan will send you home", Tan Qiao has completed a challenge of sending a car-hailing master home.

"Do you have a driver's license?" "I'll show you the way, don't watch the navigation is gone." During the challenge, the golden sentence frequently appeared, and Tan Qiao was spit out by the Chongqing driver: "Why are you still turning off the engine on the ground?"

This kind of program is exactly the same as the original "Tan on Traffic", and finally ended up in traffic safety publicity.

Today, Tan Qiao has opened many social platform accounts and has a huge fan base.

""Tan Talks on Traffic" has been done for so many years, and I hope to continue it in another form." Talking about the work done now, Tan Qiao said, "Whether it is for traffic or all safety-related fields other than traffic, I think if I can popularize it, I will use my own methods to popularize it."

The show is in full swing

In 2004, after the "Road Traffic Safety Law of the People's Republic of China" was formally implemented, the Traffic Management Bureau of Chengdu Public Security Bureau rehearsed many related publicity programs.

These programs have reached the grassroots level, entered the community, and have achieved good publicity effects. Tan Qiao is one of the performers of these programs.

High-end interview on the side of the road.

Because he liked acting since he was a child, coupled with his outstanding performance in previous shows, Tan Qiao left a deep impression on people.

In 2005, the Traffic Management Bureau of Chengdu Public Security Bureau and Chengdu TV Station launched a traffic safety education program, so Tan Qiao was chosen to host the show. The name of the program was "Tan on Traffic".

The "Best" cabinet mentor and apprentice in the show.

"Every day after get off work, I will practice with the camera at home, over and over again." Although Tan Qiao was very carefree in daily life, he was still uncomfortable facing the camera at first.

Since a traffic policeman presided over a program across borders, Tan Qiao was still very worried.

The "Waist and Horse Unity" in the show.

In the show, Tan Qiao always talks with them when facing offenders, and finally makes the offenders aware of their problems by asking questions.

"My purpose is not to punish them, but to let them know that their behavior is very dangerous, and behind them may be the responsibility of the entire family." Tan Qiao said that his previous rich work experience allowed him to better connect with the bottom of society. His character empathizes, and he hopes to reduce the occurrence of traffic accidents through his own reminders.

The forward-looking "Fugui" uncle, "Erxianqiao" uncle, "Waist and horse in one" boy, "Best" cabinet master and apprentice...one after another deeply rooted characters and the stories behind them walk through the show Into everyone's life.

This program not only achieved the effect of popularizing the law, but also brought unlimited joy to the audience.

Uncle "Erxianqiao" in the show.

To promote the law from an equal perspective, to be more humane, and to make the audience more receptive... From the program, Tan Qiao also explored a lot of experience in law popularization, and will continue to use it in future work.

Tan Qiao embarks on the road of self-healing

After the broadcast of "Tan Talks on Traffic", a large number of loyal audiences have been gained.

When the show was gaining momentum, CCTV, Beijing TV and Hunan TV all offered Tan Qiao an olive branch, but Tan Qiao refused.

At that time, he just wanted to do his job well, to be a propagandist of law popularization.

In 2018, when "Tan Talks About Traffic" was broadcast for 13 years, this program was suddenly suspended.

Return visit to the uncle "Erxianqiao".

In Tan Qiao's view, these reasons are all.

In difficult times, Tan Qiao, who was diagnosed with depression, thought that a situation like "Fugui" could encourage everyone to "look forward". Why not?

Although the uncle "Fugui" lost his tooth, his positive and optimistic attitude has not changed. Uncle "Fugui" also started a family and had a daughter.

After the return visit, Tan Qiao helped the "Fugui" uncle to apply for subsistence allowances, visit them regularly, and subsidize his children to study.

Tan Qiao paid a return visit to the "Fugui" uncle.

"Uncle'Fugui''s house is very dilapidated. Later, I want to help him renovate the house to protect it from wind and rain, clean up the house, and add washing machines and other appliances." Tan Qiao said that he will be within sight. Help those in need within the scope.

"Looking for'Fugui' uncle is also healing myself." Tan Qiao said, "Many people in the show said,'We don't burden the country or society. I have to rely on my own hands to beat myself. A piece of sky.'" I also got inspiration from it.

He often goes to orphanages to teach disabled children, talk about road safety laws, or perform the song "Love" to the children in sign language, and "sing" and dance with them.

In addition, he also set up a Child Handicap Fund under the name of the Chengdu Disabled Welfare Foundation to help disabled children.

"Doing these things, I think I have value." Tan Qiao said.

He drove a taxi, worked as a construction worker, worked as a post and telecommunications worker...Before becoming a traffic policeman, Tan Qiao tried many occupations. He also worked in farm work and fed pigs in the army.

In 1995, when Chengdu was recruiting traffic police, Tan Qiao's father saw the news and wrote to Tan Qiao about this opportunity.

"Didn't you want to be a traffic policeman before? Now there is a chance." At this time, Tan Qiao knew that his father remembered what he had said before.

My father knew that Tan Qiao's memory of wanting to be a traffic policeman originated from an experience when Tan Qiao was in his teens.

At that time, a road roller was driving on the road. Next to it was a mother riding a bicycle carrying a little girl. The little girl was sitting upside down on the back seat.

As her mother braked, the little girl fell to the ground, just between the front and rear wheels of the road roller.

On the side of the road, passing pedestrians exclaimed, but at this time the master driving the road roller didn't know it. The rumbling sound had already covered the roadside exclamation, which was accompanied by a tragic traffic accident.

The exclamation of passers-by, the fainting of his mother, the ignorance of the master of the road roller...Tan Qiao, who was standing not far from the place where the incident occurred, witnessed all this with his own eyes, and the grief in his heart was beyond words.

After returning home, Tan Qiao told his parents about this experience.

Photo by He Xi

From a small traffic policeman in his twenties to nearly half a hundred years after he left the police force, Tan Qiao has been on the road to publicizing traffic safety.

As a safety observer of the Sichuan Road Traffic Safety Association, Tan Qiao will continue to promote knowledge about traffic safety.

He hopes that traffic safety propaganda will take root on each platform, so that the awareness of traffic safety will be deeply rooted in the hearts of the people.

Everyone knows that to go to Erxianqiao, you have to walk to Chenghua Avenue~

@Minkerry: Back then, I suspected that this was a variety show.

@千川骁骁: I thought they were all actors at one time.

@沉睡的灰墙: It can be called the pinnacle of popular law programs!

@善良: The first-generation top-tier "net celebrity" in the police world.