Chinanews.com, Guiyang, December 24th, title: Ukrainian female teacher: telling the story of Guizhou overseas with photographs   Author Yuan Chao   "I really want to go back to China again and back to Guizhou." After leaving Guizhou, China for nearly two years, Olena, a teacher at the Lviv National Academy of Arts, was interviewed by a reporter from Chinanews.com in the cloud on December 24th, 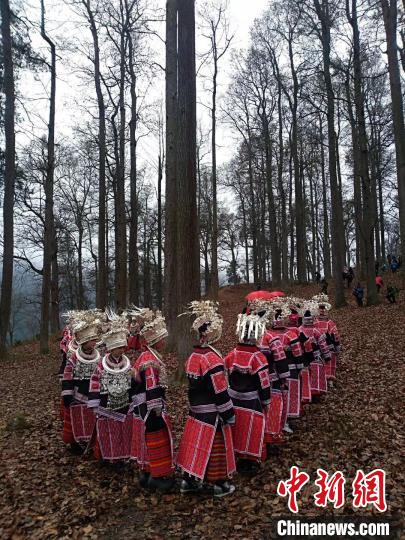 "I really want to go back to China again and back to Guizhou." After leaving Guizhou, China for nearly two years, Olena, a teacher at the Lviv National Academy of Arts, was interviewed by a reporter from Chinanews.com in the cloud on December 24th, Beijing time. Said that, although she cannot come to China at present, she is still using her way to tell stories about the culture of China’s Guizhou ethnic minorities to Ukrainian students, colleagues, and friends.

The picture shows the scene of the Miao activities taken by Olena.

When she was 14 years old, she learned about China from books. Since then, she has become curious about China, so she set her goal: learn Chinese and go to China.

In 2013, Olena was allowed to come to China to support education. Among the many cities in China, she chose to come to Guizhou.

"No suits and shoes, no tall buildings, I want to see a different China and understand its deeper culture." Olena said.

The picture shows the scene of the Miao activities taken by Olena.

She often puts her own photos of ethnic customs on Ukrainian social accounts, allowing netizens to appreciate the exquisite ethnic embroidery, silver jewelry and photos of festivals, and to understand the ethnic customs and culture.

"The charm of the Guizhou village lies in its simplicity and mystery." In 2014, Olena participated in her first ethnic minority festival in Zhenyuan, China-March 3 of the Dong nationality.

Although they don't understand the Dong language, Olena perceives this nation from the clothes they wear.

"The costumes of the Miao and Dong nationalities are like reading a book. The history and advocating totems of the people can be found in the patterns of stitches and embroidery."

After visiting the ethnic minority villages in Guizhou, Olena was delighted to find that the costumes, festivals and culture of the Miao and Dong peoples in Guizhou have many similarities with the Ukrainian ethnic groups.

"The ethnic minorities in Ukraine will also have a specific holiday, and this holiday belongs only to their own ethnic group."

It was this discovery that gave Olena the idea of ​​studying the cultural similarities and differences between the two places.

In 2015, Olena went to Guizhou ethnic minority villages to learn silver forging skills, melting, shaping, beating, drawing... Olena said frankly that learning silver jewellery is very difficult. The production of silver jewellery is not only about craftsmanship, but also about the carvings. The meaning behind the pattern, what does it represent?

At the same time, she took Guizhou Miao silver ornaments as the subject of her doctoral research.

"From the photos, you can see that the headgear and the silver jewelry worn by the Miao people in Guizhou are different, and they are different for different ages..." When introducing Guizhou, Olena will always take pictures of herself Take out the photos and explain every detail carefully to let colleagues and friends in Ukraine understand.

"If there was no new crown pneumonia epidemic, colleagues and friends would have gone to Guizhou to experience it for themselves."

At present, Olena is actively establishing contacts with ethnic minority researchers in Guizhou. She hopes that ethnology researchers from various countries can participate in academic discussions on the protection and inheritance of ethnic culture.

During the 7 years in Guizhou, Olena did not miss a minority festival.

During the interview, Olena said many times that she wanted to come to Guizhou again. She said: “This kind of urgency is like rice wine in Guizhou Miao Village. Although I don’t drink well, the passion and sweetness in the wine still make people feel good. The aftertaste is endless." (End)