(Fighting New Coronary Pneumonia) Power of the "Overseas Chinese" in the "War Epidemic": Pico Starlight Weaves Lighting Firelight   China News Service, Ningbo, December 14 (Reporter Lin Bo) "What can we do in the face of the epidemic?" "In the face of the epidemic, there may not be much we can do, but we must try our best to do it well." This is Zhejiang Province Thoughts and answers of the "Da B 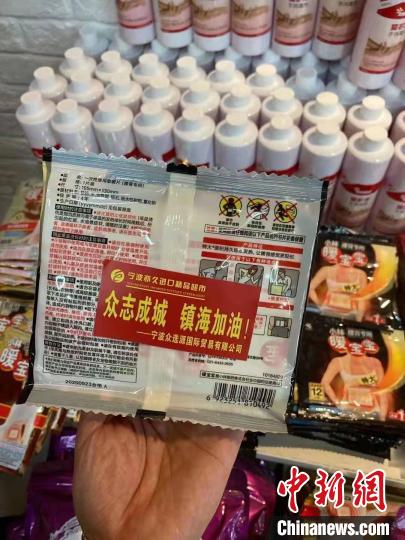 Starting at 2 o'clock on December 7, the city initiated Level I emergency response, and at the same time temporarily implemented closed management of Zhenhai District, and organized large-scale nucleic acid testing throughout the region.

In this "war epidemic", the figures of the overseas Chinese are like tiny stars, woven into the illuminating flames of the epidemic.

Setting up testing tents, distributing materials, patrolling and persuading...Although in the recovery period of the fracture, a figure on crutches can still be seen in Yinfeng community, Jiaochuan Street, commanding the community's anti-epidemic and anti-epidemic work on the front line.

He is Zhou Guangrui, Chairman of the Overseas Chinese Federation of Jiaochuan Sub-district, Secretary of the Party Committee of Yinfeng Community and Director of the Neighborhood Committee. “We give full play to the advantages of community grid management, do a good job in epidemic control, and organize volunteers from the overseas Chinese community to fight the fight against the epidemic. "

At the grassroots level, the figures of "big white" in the overseas Chinese community connected the warmth of the epidemic.

Helped to move materials, register temperature, and maintain order at the nucleic acid sampling and testing points of Huatong Electric and 1688 Kaiyuan Plaza, Zhuangshi Street, Zhenhai District... Under the leadership of Wang Dingsheng, deputy director of the United Front Work Department of the Zhenhai District Party Committee and chairman of the Zhenhai Federation of Overseas Chinese, all party members and cadres The assembly was completed at 1 o'clock on December 7, and after receiving the task, he quickly rushed to the front line of the street community to assist in the nucleic acid detection and sampling work.

Walking in the cold winter, despite the bitter wind, they walked firmly.

From December 9th, Zhenhai District has comprehensively strengthened control measures within the area, and successively organized the second and third rounds of large-scale nucleic acid testing.

At 5:30 on the same day, all party members and cadres of the Overseas Chinese Federation in Zhenhai District went to Huatong Electrical Appliances, Guangming Village Five-Star Senior Activity Center, Xujiayan Bridge and other sampling and testing points in two separate routes to assist medical staff in carrying out nucleic acid testing and sampling work. .

At the scene, some of the "Dabai" of the Federation of Overseas Chinese guided the registration by scanning the code, patiently answering the questions of the masses, some guided the masses to line up in an orderly manner, keeping the one-meter line, and some registered temperature, checked the health code... Wearing airtight protective clothing , "Da Bai" of the Federation of Overseas Chinese did not care about drinking water or going to the bathroom, and used his own practical actions to build a line of security.

According to statistics, in the three rounds of large-scale nucleic acid testing, the party members and cadres of the Overseas Chinese Federation in Zhenhai District assisted in completing the nucleic acid testing and sampling tasks for more than 8,000 people each time on average.

Chen Qiyang, Chairman of the Overseas Chinese Federation of Zhuangshi Street, Zhenhai District, and Deputy Station Director of Zhuangshi Street Cultural Station, and his team created the Ningbo version of "Cocoa Sea"-"Song of the Closed Zone" to boost morale, fight the epidemic together, and cheer for Zhenhai; Camel Street Hu Huifang, a consultant from the Federation of Overseas Chinese, played the role of an "official audio propagator". After receiving an emergency commission from the street, he completed the Mandarin version and the dialect version of the "Report to the Camel Residents" in 2 hours for use by the propaganda vehicle.

Dedicated to the best of your ability, showing the love of overseas Chinese

From the original normal working mode to the "war epidemic" mode of action, Chen Yue, chairman of the Zhenhai District Overseas Chinese Enterprises Association and head of Ningbo Simat New Materials Co., Ltd., quickly adjusted his work status after receiving the news of the epidemic.

"We are more calm than before, and our action mechanism is more complete." Chen Yue said that after experiencing the epidemic in early 2020, their "war epidemic" stepped more calmly this time.

"I hope to do something within our power." As a "second generation", Chen Yue said that the company has developed in Zhenhai for nearly 30 years and has a deep relationship with Zhenhai. At present, the company has reported to the Zhenhai Red Cross Society. Donated 100,000 medical masks, 500 protective clothing, 11,000 pairs of medical gloves, 10,000 splash-proof masks and 50,000 yuan in cash for the anti-epidemic and epidemic prevention in the region.

The path of the "war epidemic" may be different for each overseas Chinese and retained enterprise, but under the "multi-modality" and "war epidemic", it is enough to "warm the power."

The reporter learned that in the face of the sudden epidemic, the Federation of Overseas Chinese in Zhenhai District has strengthened ties with member companies, understands and grasps the difficulties and problems faced by overseas Chinese enterprises in the region under the temporary closed management, and collects and reflects the opinions of overseas Chinese enterprises. , Suggestions, and strengthen communication and coordination through information channels while doing a good job of communication and coordination with relevant departments.

There is love in the world, and love echoes. If winter has come, then spring is not far away.