A second cone grows "at high speed" on La Palma

The La Palma volcano has been threatening to say goodbye for several weeks, but on the other hand it seems not to want to leave even with hot water. The last one: when the main cone, with ... 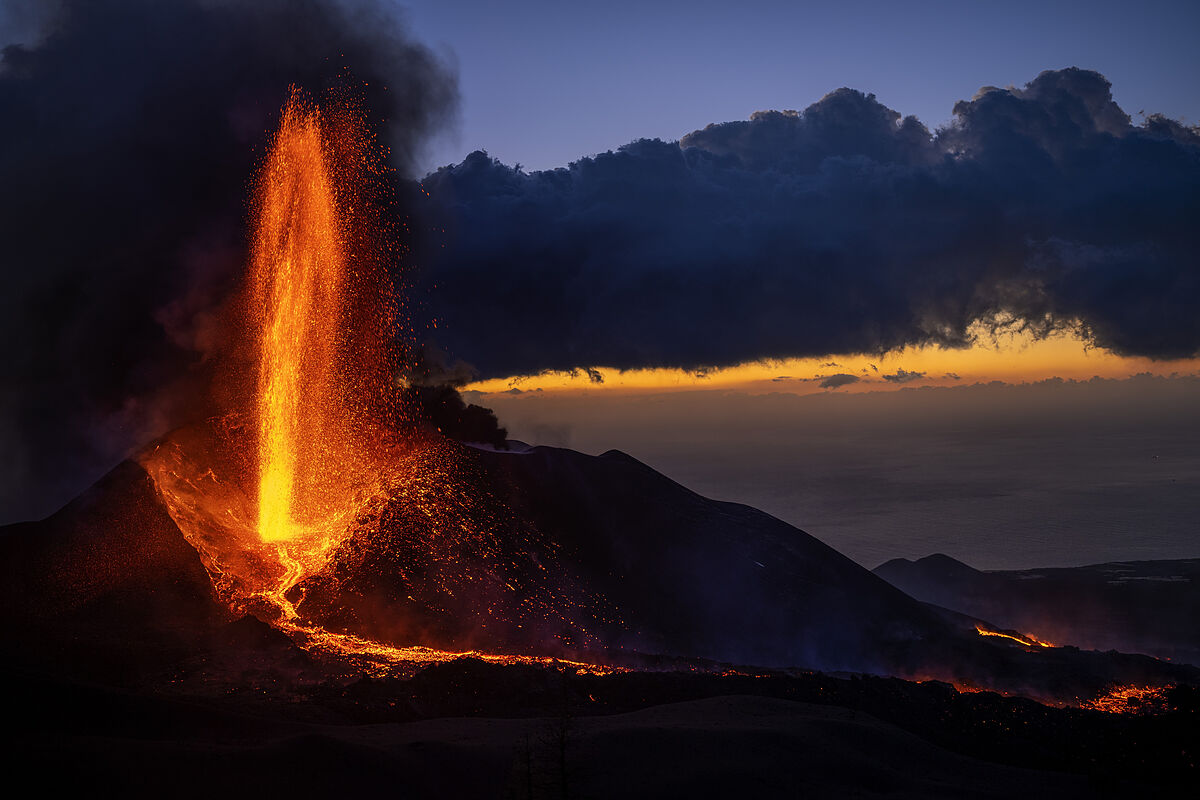 has been threatening to say goodbye for several weeks, but on the other hand it seems not to want to leave even with hot water. The last one: when the main cone, with its various mouths in operation, began to show signs of decay and stopped releasing ash (it spent a few hours even without expelling anything at all three weeks ago), suddenly the jet of magma that feeds

the eruption found another way to continue assembling it

, began to release pyroclasts around there and, to the surprise of the volcanologists from the National Geographic Institute,

, began to mount a second cone on the west slope of Cumbre Vieja, the mountain range that divides the youngest island in two, together with El Hierro, of which the Canaries are formed.

Volcanologists, these unique interpreters of the Earth's digestions, love to say, when the poetic stroke hits them, that

an eruption is a two-sided phenomenon: that a volcano destroys, yes, but it also creates

, formed by the lava flows from the San Juan eruption in 1949 and which today is the most fertile land on La Palma, which probably means in all the Canaries, to grow bananas, yellow gold through these lands.

The same that that space was created, and just as the nine volcanic cones were erected at the time that make La Palma a geological paradise and an island of rugged beauty that is reminiscent of the movie 'Jurassic Park',

where the natives once located the Montaña Rajada ravine, the place where today a monstrous black cone has risen more than 250 meters high.

, from the Higher Council for Scientific Research (

the eruption has generated "a second cone that ejects pyroclasts, along with the previous and original cone, which is strombolian"

, that is to say, of a more explosive nature.

Volcanism in La Palma may be going to more

when a week ago the lava began to flow from a lower area of ​​the main cone, on the north slope of the volcano built so far, but "the pyroclasts are forming this second cone at high speed ... This volcano never ceases to amaze us. "

Soler points out that this eruption in Cabeza de Vaca is constituting a turning point in the recent geological history of the island, and by recent it is necessary to understand the last five centuries, which vulcanologically is "a blink of an eye", as the experts like to say.

Soler's argument is that, assuming that this episode, already in its seventy-eighth day this Monday, is going to be the longest that there has always been a record in the place, "it is important to appreciate that, although so far the The duration of each eruption was shorter than the previous one, this one exceeds them all, which constitutes a turning point. "

This may mean, according to the argument, that

although three eruptions in the last 72 years seem to show a notable recurrence, the volcanism on La Palma may be increasing

. And even more so considering this new 'son' cone that comes to grow in the shadow of the 'father', the uncorked on September 19.

The cone, then, has been formed "by having broken the previous dike, through which the lava flowed in one direction," and having found a secondary path not so high up, a new path. The lava now gushes out there, and

practically only ash and gases come out of the original cone

. At least in this second outing, the magna mana without explosive dynamics, but with great fluidity, which arrived at times of the week at a speed of six meters per hour.

The deformation of the ground around this second cone was also important in the first days, which

suggests a serious activity in the subsoil

, both seismic and gases, the true gasoline, the latter, of all volcanological phenomena.

The inhabitants of the Aridane valley, moreover,

They continue to live a strange nightmare

, on the one hand subjugated by the power of the volcano, on the other horrified by its destructive capacity: until a week ago they dreamed of saying goodbye to its eruption, the one that has marked their lives these last two and a half months. And right now, instead of one volcano going on, they already have two.

Eruption on La Palma The future of a 'Galician' volcano: "It neither ends nor is it going up"

Cumbre Vieja In the? Black valley?

from La Palma: "Run away, the gases from the volcano are coming!"