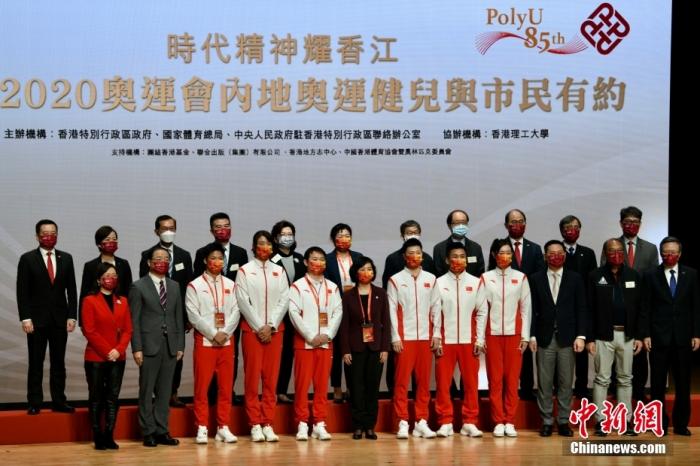 (The spirit of the times shines on Hong Kong) Mainland Olympic athletes talk to Hong Kong students: the country is a strong backing

Mainland Olympic athletes and coaches such as Ma Long, Su Bingtian, Sun Yiwen, Lu Xiaojun, Cui Xiaotong, and Wang Aimin came to Hong Kong Polytechnic University on the 5th to share their participation in competitive sports with young students in the "Tokyo 2020 Olympic Games Mainland Olympic Athletes Have a Date with the Citizens" event story.

The picture shows some members and guests of the delegation of Olympic athletes from the Mainland attending the event.

During the "Regulations Amendment Disturbance", the Hong Kong Polytechnic University was once ravaged by mobs and forced to suspend classes.

Nowadays, on the campus where teaching order has long been restored, the report meeting is full of seats. There are not only college students, but also elementary school students and gray-haired elders who have come here.

The wonderful moments of the Olympic athletes in the competition were played at the event site. There was thunderous applause, and many spectators cheered and waved national flags and regional flags.

Su Bingtian, who ran 9.83 seconds in the men's 100m semifinal of the Tokyo Olympics, shared his story in Cantonese.

He said that when he was a child, like many boys, he liked to read Hong Kong's martial arts novels, and his favorites were Jin Yong's "Swordsman" and "Tian Long Ba Bu".

He laughed and said that he was convinced that "the world of martial arts, only fast is not broken", and dreams of one day becoming the fastest chasing teenager.

Su Bingtian revealed that Su Huawei, a Hong Kong athlete who has participated in the four Paralympics and won 6 golds, 3 silvers and 3 bronzes, is the "Su God" in his heart. He sees the faith of young people from Hong Kong and the Mainland to fight for their dreams.

Su Bingtian also said that thanks to the strength of the motherland, with the support of the team, he can receive systematic and scientific training and rehabilitation protection, and get more opportunities to exercise in international competitions.

He hopes that sportsmanship will continue to inspire young people from the Mainland, Hong Kong and Macau to go hand in hand.

Sun Yiwen, the champion of the women’s individual epee competition at the Tokyo Olympics, said that the Olympic venue is a sports arena and a stage for athletes to show their fighting spirit and show their national image. It's just the result, but also the tenacious spirit of constantly challenging oneself, surpassing oneself, and achieving a better oneself.

"This will transcend the boundaries of sports and gather a strong spiritual force."

Sun Yiwen also said that he hopes that through sports, the spirit of being positive, striving for excellence, pursuing excellence, and daring to shine can be passed on to more young people in Hong Kong and the Mainland, and he also hopes to pass on his little stubbornness to hard work. Young people who learn, motivate each other and grow together.

Malone, the men's singles and team champion table tennis at the Tokyo Olympics, said that besides gold medals and championships, table tennis taught him how to face winning or losing the most.

"Only with the determination and hard work to win can we achieve success; but sports teach us not only to win or lose, but also the courage to come back after failure and the belief not to give up in desperate situations."

In the Q&A session, when faced with a question from a Hong Kong elementary school student on how to relieve stress, Su Bingtian said that he would simulate the game situation the day before the game.

He was seriously injured once in 2019. “In fact, he has already died once. Since God gave himself another chance, there is nothing to be afraid of.”

Regarding how to view pressure, Ma Long said that athletes will face various pressures when they wear the national team uniforms.

In training, the coach will also set up "obstacles" to exercise athletes.

At the same time, he also likes to do psychological construction for himself.

Sun Yiwen, who was called "the coexistence of beauty and strength" by the audience, won the Tokyo Olympic Games by "a sword".

She believes that the last sword match is not the level but the mentality.

Cui Xiaotong, the women's rowing quadruple scull champion at the Tokyo Olympics, said in sharing that the achievements of the Chinese rowing team are derived from the powerful motherland behind them, and sports is the best embodiment of a country's comprehensive national strength.

At the report meeting, the athletes frequently made their golden sentences, and there was continuous applause on the spot.

When asked what he would like to send to young people in Hong Kong, Ma Long said, don’t forget your own good for the good of others; Cui Xiaotong said that dreams do not work hard because of seeing it, but seeing it because of hard work; Su Bingtian said that the road to struggle is possible There are setbacks, but you must not forget your original intention and work tirelessly for your goals.

At the event that day, when Lin Dahui, Chairman of the Board of Trustees of the Hong Kong Polytechnic University, gave a speech, he invited Olympic athletes to study at the school after retirement.

Su Bingtian, an associate professor at Jinan University, invited students from Hong Kong to study and exchange at the University.

Hong Kong Polytechnic University student Jin, who listened to the report on the same day, said in an interview with a reporter from China News Agency that Olympic athletes are very proud and proud of winning glory for the country on the field and letting the world see China's power.

The visit of mainland Olympic athletes to Hong Kong has promoted exchanges with Hong Kong and allowed Hong Kong youth to learn their fighting spirit.