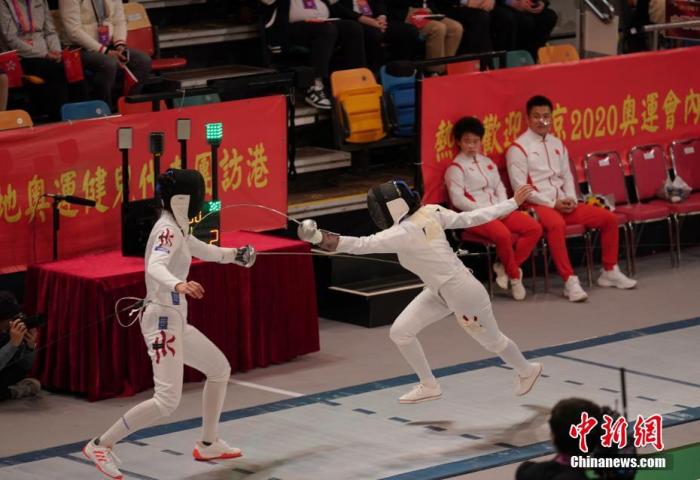 On the 4th, the mainland Olympic athletes visiting Hong Kong exchange team participated in the grand parade at the Queen Elizabeth Stadium in Hong Kong. The hands of the men's singles and team champions of the Tokyo Olympics table tennis, Ma Long, competed with each other, and the women's weightlifting champion Li Wenwen and the famous Hong Kong artist Wang Zulan competed in a tug of war... all kinds of exciting The scene drew cheers from the audience, pushing the "Olympic fever" to a climax.

At the Tokyo Olympics, Ma Long's hands-to-heart comparison left a deep impression on "fans" at home and abroad, including Hong Kong compatriots.

When attending the big show, he reproduced this classic moment, and the enthusiastic Hong Kong audience responded collectively.

The men's gymnastics ring champion Liu Yang in the Tokyo Olympics' "crooked neck kill" in the competition was made by netizens as an "emoticon pack" and it was widely circulated, calling it "full of kingly spirit."

After Liu Yang reproduced the "Crooked Neck Kill" at the grand show, the auditorium rang out with voices such as "Awesome" and "Handsome".

A number of "alternative" competitions were arranged at the grand show.

The men’s table tennis men’s team champions Ma Long and Xu Xin of the Tokyo Olympics played three table tennis at the same time. The women’s individual epee champion Sun Yiwen pierced the can with a sword. The women’s 87 kg and above champion Li Wenwen and Hong Kong artist Wang Zulan competed in a tug of war. Su Bingtian and Hong Kong athletes The race was running at an 8-second pace... The witty and fun race attracted bursts of laughter and applause from the audience.

In the fun games, the athletes also shared their experience of participating in competitive sports.

Sun Yiwen, who reversed the championship at the Tokyo Olympics, said that being able to participate in the Olympics shows that everyone has the hope of fighting for gold.

Mentality is the most important thing. Temporary backwardness is not backwardness. We must fight every sword well.

Angel Zhong said at the big show that the two were "adversaries and friends for many years" and would ask about each other's training status.

When asked what he would like to send to young people in Hong Kong, Li Huishi said that as long as he works hard and persists, he will succeed.

On the morning of December 4th, some athletes from the mainland Olympic athletes delegation came to the Victoria Park Swimming Pool in Causeway Bay, Hong Kong, to demonstrate diving and swimming to the audience, demonstrating the demeanor of the Olympic athletes.

The picture shows the mainland Olympic athletes waving to the audience.

The visit of mainland Olympic athletes to Hong Kong has set off an "Olympic fever" in the SAR.

At the end of the big show, Hong Kong singer Hacken Lee and four Olympic athletes sang "Red Sun" together. The audience beat the beat and pushed the atmosphere to a climax.

Miss Lu, a Hong Kong citizen, was one of the lucky spectators that day. She won a red T-shirt signed by the gymnast in the lucky draw.

Ms. Lu said that it is very rare for Olympic athletes from the Mainland to visit Hong Kong, and she is very excited and moved by this.

"It's not easy for them to come here. (Due to the epidemic prevention and control requirements) they will have to be isolated when they go back." She believes that the mainland Olympic athletes' visit to Hong Kong will encourage citizens to exercise more.

Li and three friends watched the big show that day and a demonstration performance held earlier.

In the eyes of classmate Li, the athletes in the grand show showed their gentle and lively side while being professional.

She believes that the mainland Olympic athletes' visit to Hong Kong will help strengthen the cohesion and centripetal force of the Chinese nation, and let Hong Kong compatriots feel the sense of glory of athletes winning the championship together.