Feature: "Sports Fever" is where the dream begins 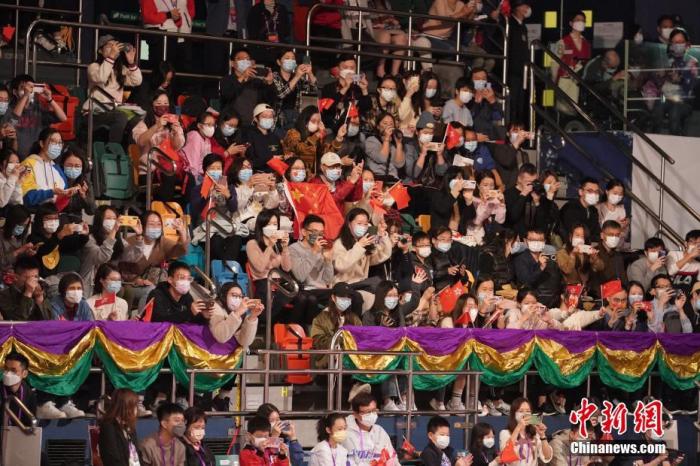 (The spirit of the times shines in Hong Kong) Feature: "Sports Fever" is where the dream begins

On the morning of December 4th, cheers and applause were higher than those in the Queen Elizabeth Stadium in Hong Kong where the "Olympic Athletes Exhibit Demeanor" was being demonstrated.

The repeated climaxes ranged from table tennis players Malone and Xu Xin's repetition of the "magic circle", to badminton player Wang Yilu's honest speech "Training is too tired to laugh", and of course the weightlifter Lu Xiaojun's high-spirited "youth, fight!"

This is the second day of the arrival of a delegation of mainland Olympic athletes to Hong Kong, and it is also the delegation's first public performance in Hong Kong.

The athletes were divided into two groups. One group demonstrated badminton, fencing, gymnastics, and table tennis at the Queen Elizabeth Stadium, and the other group demonstrated diving and swimming in the Victoria Park Swimming Pool.

On the morning of December 4th, some athletes from the mainland Olympic athletes delegation came to the Queen Elizabeth Stadium in Hong Kong to demonstrate to the audience in gymnastics, trampoline, badminton, fencing, table tennis and other events.

At 8 o'clock in the morning, more than an hour before the start of the event, the spectators outside the stadium lined up for tens of meters. Table tennis fans made their own hands and commemorative cards of Malone and Xu Xin's support. They were printed on the stadium. There are also badminton fans holding a big yellow duck doll and binoculars in their hands. "I am a fan of Wang Yilu and Huang Dongping. Their mixed doubles combination is called the'Yellow Duck' combination, so I brought a simple duck to cheer for them."

Before the demonstration performance, the screen in the center of the stadium played the highlights and moments of the Chinese national team athletes' championship in the Tokyo Olympics.

Although about 4 months have passed, the fighting spirit contained in the sports competition, as well as the excitement, encouragement, and touch it brought, still touched the audience.

When the screen picture faded away, the next moment the long-awaited athlete entered the arena, and the audience in the stadium immediately boiled, erupting with deafening screams.

The athletes smiled and waved, and demonstrated their "sports acrobatics" in subsequent events, such as the "Parallel Bars King" gymnast Zou Jingyuan posing cute and funny on the inverted parallel bars; Ma Long and Xu Xin played "magic" "Turn in circles"-play around the ping pong table from inside the fence to outside the fence.

Hong Kong athletes also appeared one by one, competing with the mainland athletes. In addition to badminton and table tennis players teaming up for doubles, Jiang Mingan, known as the "Goddess of Fencing" in Hong Kong, and mainland fencer Sun Yiwen also came together. During the "peak" duel, the two interacted very lovingly. From off-stage to on-stage, talking about training goals, Jiang Minguan generously hugged Sun Yiwen, and said with a smile: "I want to learn more from Sister Sun."

There was also an interesting episode in the event: I saw Ma Long and Xu Xin walking towards the corner of the audience with a smile. The reporter followed their gaze and found that there were "Master Sister", former table tennis player Zhang Yining and "Diving Queen" Guo Jingjing. The four of them chatted with each other and started taking selfies.

At the end of the event, Xu Xin took the initiative to talk about his relationship with Hong Kong.

At the 2009 East Asian Games, he won his first adult championship at the Queen Elizabeth Stadium and embarked on a journey to pursue his dreams.

"For me, Hong Kong is the first city in my dream to set sail, and I also hope that this is the beginning of all outstanding athletes to pursue their dreams."

Ma Long also took this opportunity to encourage young Hong Kong athletes: "You will always be stronger than you think." He hoped that the good results of the Hong Kong Table Tennis Team in the Tokyo Olympics will attract more young people to participate in sports. "Me too. Hope they will like table tennis."

The picture shows the badminton players Huang Dongping and Wang Yilyu pairing with Hong Kong athletes for an exhibition match.

The heart-warming encouragement has obviously been delivered to the audience. Liang stood outside the gymnasium holding a camera for a long time and did not want to leave. When interviewed by reporters, he was still reminiscing about the excitement of seeing idols Ma Long and Xu Xin.

He is a young table tennis player who is participating in the "Young Ping Pong Training Program" launched by the Hong Kong Table Tennis Association. He dreams of becoming a full-time athlete one day.

He said that the mainland athletes' visit to Hong Kong not only performed wonderful demonstration performances, but also inspired Hong Kong athletes.

Zhang Conglin, an 8-year-old kid who also has the dream of an athlete, is standing outside the stadium holding a panda to take pictures.

He usually practices fencing every week. He is very pleased to see the brave and heroic Jiang Mingan and Sun Yiwen, as well as the fencing athlete Zhang Jialang who won the first Olympic gold medal for Hong Kong after the return. I hope that one day I can be as good as my brother and sister in swordfighting."

The performance ended, and the audience left in twos and threes.

For many people, this is not just a "star chasing" or a sports demonstration performance, but also a seed of dreams planted in the heart, from then on striving to grow and flourish, just like Xu Xin more than ten years ago. A new life sets sail here.