"Spreading wings" Yu Chongling, the engineer of Juhei, he surveyed and selected the best route for the high-speed railway 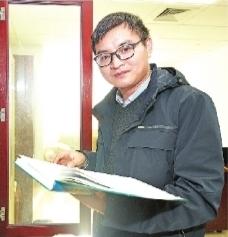 More than 300 days a year, "spreading the wings" in Chongling Juehe selects the best route for Zhang-Ji-Huai high-speed railway

There are two phoenixes in Xiangxi, Hunan: one in Shen Congwen's pen and the other in Huang Yongyu's painting.

On December 6, the Zhangjihuai high-speed rail linking Zhangjiajie City, Jishou City and Huaihua City will be opened to traffic.

Another phoenix spread out its wings-surrounded by mountains, the ancient Phoenix station on the Zhangjihuai high-speed rail line looks like the legendary "divine bird".

The Zhang-Ji-Huai high-speed rail line, winding 247 kilometers in the clouds, has 162 bridges and 118 tunnels strung together.

38-year-old Wang Yinghe said: “We have measured every mountain road, every section of roadbed, every tunnel with our feet.”

"China's most beautiful poverty alleviation high-speed rail" turned from a blueprint to a reality.

Wang Yinghe leads the geological survey and design team of the Fourth Railway Institute, like a phoenix, "spreading their wings" in the Chongling Mountains of Western Hunan for more than 300 days a year.

■ "He wrote his most brilliant essay in Zhang Jihuai"

Wang Yinghe, deputy chief engineer of the Geological Roadbed Design and Research Institute of the Fourth Railway Institute, came here countless times, "When I first came, there were only mountains."

In 2015, Wang Yinghe became the head of the professional design of the geological roadbed of the Zhangjihuai high-speed railway.

Wang Yinghe said that along the Zhangjihuai high-speed railway, the geological conditions are extremely complicated: the total length of bridges and tunnels on the whole line accounts for 90% of the total mileage opened to traffic, and unfavorable geological conditions such as karst underground rivers, rock piles, landslides, and dangerous rock falls are widely distributed along the line.

A string of numbers came out with both feet by Wang Yinghe and the team.

Standing in front of Furong Town Station and looking around, the reporter was surprised that it was more than 80 meters higher than the surrounding county town.

In railway construction, survey and design is the "leading"!

Wang Yinghe said that the site selection of Furong Town Station is a difficult problem: the line must pass through the Daqingshan with strong karst development and dense underground river pipe network.

Two karst tunnels and a bridge across the Youshui River Valley are connected to the front and back of Furong Town Station.

During the investigation of the Zhangjihuai high-speed railway line, Wang Yinghe and his team spent one third of their time in Furong Town: they conducted a geological survey of 588 square kilometers, completed special studies on karst hydrogeology and environmental geology in Furong Town, combined with geophysical and drilling results , Successively carried out ten rounds of safety demonstration of the station establishment plan.

Due to the successful geological route selection during the survey, the 12-kilometer-long Yongshun Tunnel encountered only one large cavern during construction, and there were hints in the preliminary survey data; advance geological forecasts and accurate warnings during the construction.

After the cave was revealed, they went deep into the cave for the first time to accurately find out the shape, engineering geology and hydrogeological characteristics of the cave, which provided a solid foundation for determining the treatment plan of the cave.

"Mr Wang has to be busy with professional coordination and design communication during the day, and only has time to review the drawings after 11 o'clock in the evening." said Zhang Gan, a professional partner of Dilu, and Wang Yinghe fainted in the office at noon when the construction drawings of Furong Town were completed.

Zhu Jiang, head of Zhang Jihuai's high-speed rail design, said that Wang Yinghe had published many papers during Zhang Jihuai's 6 years, but "he wrote his most brilliant papers in Zhang Jihuai and in the mountains."

During the survey in Zhangjiajie, you can see the tourist cable car that shuttles through the mountains every day. "When can I sit up and see the scenery?" Wang Yinghe said. After this wish was buried in my heart for 3 years, the project came to an end in 2018. They It’s the first time to experience the beauty of Tianmen Mountain on the cable car.

■ "Since you choose this path, you must stick to it"

"No matter which job you choose, you will experience a period of pain. As long as you work hard, you will make a difference."

After 12 years, Wang Yinghe still remembers the words sent to him by her mentor.

In 2009, Wang Yinghe, who graduated with a Ph.D. from Hohai University, had three employment options: go to a university; go to a design institute in Shanghai; and go to the Fourth Railway Institute.

After thinking for 3 days, Wang Yinghe made the choice, carried her luggage on a pole and came to Wuhan, walked into the Fourth Railway Institute, and became the first doctorate of the Geological Roadbed Design Institute. “my country’s high-speed rail development has entered a golden age. What I learned is The geotechnical profession, I believe it can make a difference."

In the summer of that year, Wang Yinghe participated in the first project after joining the post-Guangdong Western Coastal Railway.

"In the mountainous area of ​​Guangdong in midsummer, in order to prevent leech, you must not only wear long clothes and trousers, but also tighten your trouser legs." Wang Yinghe was occasionally disappointed when communicating with classmates working in the city.

"Compared to Zhang Jihuai's high-speed rail, these things are actually nothing." Wang Yinghe said, a compass took him out of the "painful period" that his mentor called back then.

That was an experience in Yuhuang Mountain in Sanmenxia City, Henan Province.

In the spring of 2012, the Haoji Railway, which runs from north to south, entered the early stage of geological survey.

At 4 p.m. that day, when he and a colleague completed a geological survey and were preparing to return, they "cannot get out of the mountain."

"At that time, there was no navigation system in my phone." Wang Yinghe said, the night was getting darker and there were wolves on the mountain.

In fear, the two young people carrying wooden sticks decided to use the compass to "rush in one direction".

Two hours later, they finally saw the car lights on the highway.

Zhang Yong, who is in charge of bridge professional design, and Wang Yinghe had the experience of surveying together.

In Zhang Yong's eyes, geological surveys are more like "jungle expeditions": the mountains are densely forested. When going up the mountain, apart from carrying survey tools, a wooden stick never leaves his hand.

Wang Yinghe explained that in addition to hitting snakes, the stick has another function to detect the animal traps set up by the hunters.

Wang Yinghe's wife, Wang Xiaoting, once received a photo from her husband. The sign on the photo "There are wolf clamps on the mountain, and the white clamp is clamped to death" made her worried.

Wang Xiaoting didn't know that her husband had experienced even more dangerous things: the huge boulders that fell on the mountain while traveling in the valley would suddenly smash in front of him.

"I saw two sheep being smashed not far from me." Wang Yinghe said, that fear is unforgettable.

In 2011, after 28-year-old Wang Yinghe became a senior engineer, some units extended an "olive branch" to him one after another, and he declined these "no need to enter the mountain" invitations one by one.

Zhang Jihuai's high-speed rail changed from a drawing to a reality, and Wang Yinghe couldn't help but think of the compass back then.

This doctor who walked out of the mountains has already understood the truth from the second half of the words of his supervisor: "Strengthen your confidence and rush in one direction, and you will succeed."

■ "I also danced with them, laughed, and laughed until tears came out"

A group of Tujia cadres and villagers, dressed in national costumes, surrounded a group of "people who came to build the railway", singing, jumping, laughing...

Wang Yinghe said that this kind of scene appeared more than once during the study of the Furong Town plan, "I also jumped with them, laughed, and laughed until tears came out."

Wang Yinghe said that such a scene reminded him of a plate of bacon deep in the mountains.

"That plate of bacon is really fragrant." Many years later, the lingering fragrance of bacon still remains in Wang Yinghe's memory.

At about 2 o'clock that afternoon, the group was hungry and accidentally encountered an elderly man who was over seventy years old living alone.

Seeing three "children from the city", the old man was happy and had to stay to eat, "I haven't seen anyone for half a year."

Wang Yinghe recalled that the old man took out the bacon that he was reluctant to eat.

After eating, the old man resolutely refused to collect money. "It is not easy for children in the city to go to the mountains to build the railway."

The railway is the expectation of generations of mountain people!

At those high-speed railway stations built on the mountainside of Zhangjihuai High-speed Railway, the reporter found an interesting picture: the locals in the scenic area regarded the newly completed station as a "check-in point."

"Many of them have never seen a high-speed rail train." Touching the scene, Wang Yinghe remembered herself back then: He took the train for the first time at the age of 22 because there was no railway in his hometown.

Looking at the villagers who "clocked in", Wang Yinghe grinned.

Zhang Jihuai's twin daughters were born in the year of the early high-speed rail survey.

Wang Yinghe often compares this railway to her own daughter, "it changes every time and is very kind."

Over 300 days of fieldwork a year, Wang Yinghe was touched, and she also engraved her tearful memory.

In 2016, her grandmother was critically ill, and Wang Yinghe rushed home to her hometown, but failed to meet the old man who brought him up for the last time;

In 2018, before his mother was dying, she kept chanting his name. Wang Yinghe leaned over the hospital bed. The old man could not recognize Chaosiyepan’s son;

In February 2020, the bus that went to Jishou to resume work drove alone in the empty streets of Wuhan, and Wang Yinghe burst into tears;

Wang Yinghe said that in my country’s current railway construction, many majors no longer need to climb mountains, but geological survey is the only exception. “Although remote sensing, drones and other technologies are helpful to geological majors, the mountains are luxuriant and the vegetation is first-hand. Geological data has to rely on feet."

The Zhangjihuai high-speed rail opened to traffic, and Wang Yinghe has begun to participate in the preliminary research of the Yichang-Fuling section of the high-speed rail along the Yangtze River.

"Men should have Lingyunzhi, guard the mountains and rivers and protect the folks." As he posted this circle of friends, Wang Yinghe once again stepped into the mountains.