Beijing takes multiple measures to improve biodiversity and will welcome 3 million migratory birds this winter "Giant Panda in Bird" Great Bustard Appears in the Sub-center The great bustard in the sub-center becomes the "star" of the bird watching circle Long-eared Owl kingfisher   At present, it is the peak of migratory bird migration in autumn and winter. A reporter from Beijing Youth Dail 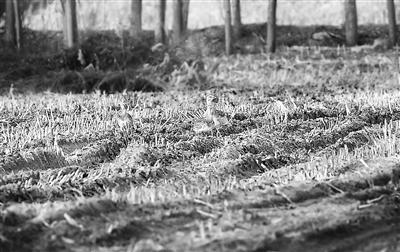 "Giant Panda in Bird" Great Bustard Appears in the Sub-center

At present, it is the peak of migratory bird migration in autumn and winter.

A reporter from Beijing Youth Daily learned from the Beijing Municipal Bureau of Landscaping and Landscaping that it is estimated that there will be about 3 million migratory birds in Beijing this winter.

In the process of migratory birds moving south, Beijing will become a "transit station." They will either search for food or rest on their feet.

In recent years, the city has taken into consideration the needs of migratory birds and other wild animals for eating, drinking, housing, and transportation during the process of gardening and greening, and the population of wild animals has gradually increased. Beijing has become one of the most biodiversity-rich capitals in the world.

Recently, three great bustards appeared in the sub-center of Beijing city, becoming the "stars" of the bird watching circle.

According to Guo Geng, a researcher at Beijing Milu Garden and a senior birdwatcher, the Great Bustard is a national first-class protected animal, and the International Union for Conservation of Nature has identified it as a world vulnerable species.

According to statistics, there are only a few thousand great bustards in the world, and the probability of being observed is very small.

A reporter from the Beijing Youth Daily learned that the Great Bustard has appeared in Tongzhou for six consecutive years.

According to Li Hui, a veteran birdwatcher, compared with the photos taken last year, two of the three great bustards discovered this year are most likely to have been there last year, and one more was added this year.

In order to reduce the impact of bird watching crowds on birds, in addition to close monitoring, the municipal and district landscaping departments have also produced more than 30 publicity slogans and posted them in locations where the great bustard may be photographed, reminding citizens not to disturb, feed, or affect animals , To create a quiet and comfortable living environment for them.

A reporter from the Beijing Youth Daily learned that the Great Bustard is one of many migratory birds that transit through Beijing.

According to previous monitoring reports and current monitoring data analysis, there are about 3 million migratory birds in Beijing this winter.

Zhang Zhiming, director of the Wildlife and Wetland Protection Division of the Municipal Landscaping Bureau, introduced that when Beijing launched a new round of afforestation of one million acres in 2018, it clearly proposed to build an interconnected forest wetland ecosystem to lay the foundation for increasing biodiversity .

In terms of plant selection, the plant selection criteria of “native, longevity, stress resistance, food source, and beauty” are proposed. In addition to considering the benefits of landscape and greening, plant configuration should also pay attention to the construction of animals and birds feeding and habitat ecological environment.

"Some migratory birds are greedy for Beijing's good ecological environment and simply'anti-visitors' and spend the winter peacefully with Beijing as their home. There are also migratory birds who have built a'love nest' in Beijing and lived their lives with gusto." Zhang Zhiming said.

In recent years, the city’s wildlife population, including migratory birds, has gradually increased, and Beijing has become one of the capitals with the richest biodiversity in the world.