Investigation of “vomiting and diarrhea after meals of students” in Fengqiu, Henan: “Meals without approval” of catering points, parents hope to say

Chinanews.com, Zhengzhou, November 27th. Title: Investigation on "Students' Vomiting and Diarrhea after Meal" in Fengqiu, Henan Province: "Meals without approval" Parents are hoping to say   Author Kan Li Li Chaoqing   On November 26, a reporter from Chinanews.com went to Fengqiu to conduct an on-site interview on the issue of “students vomiting after meal and the principal cried bitterly” in 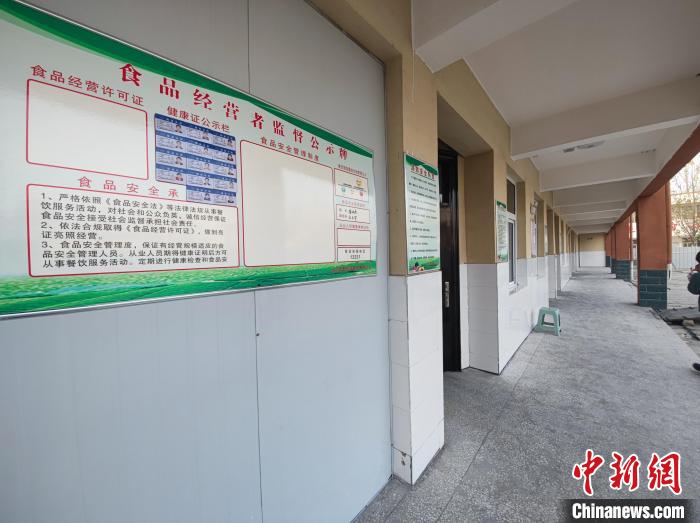 On November 26, a reporter from Chinanews.com went to Fengqiu to conduct an on-site interview on the issue of “students vomiting after meal and the principal cried bitterly” in Fengqiu, Henan.

The teaching order of Qicheng Middle School in Zhaogang Town, where the incident occurred, is normal. The principal Wang Yong said, “There are still three students in the hospital for treatment”; the parents of the sick students said that they hope the relevant departments will give an explanation as soon as possible.

On the 23rd of this month, more than 30 students from Qicheng Middle School experienced vomiting and diarrhea after lunch.

After the incident, when talking about the diarrhea incident on the 23rd and why he still did not stop accepting food from the catering company on the 25th, Wang Yongsheng said with tears, "No, because this is a tender by the Education Bureau."

The food operator supervision notice on the wall of the catering point.

The food catering in question is located in the courtyard of Nanchanggang School in Zhaogang Township in the county. It is a brand-new two-story building surrounded by iron sheets.

The reporter saw two female staff members at the food catering site. They said, "It has stopped now, only two people stayed behind."

Under the guidance of the staff, the reporter checked the daily catering menu, operation room and reserve ingredients of the catering point.

In the staple food warehouse, storable materials such as rice, flour, oil, etc. are neatly arranged, and the acceptance system and food storage system are hung on the wall.

"We have to keep samples for 48 hours of the food delivered every day for random inspection." The staff member surnamed Wang pointed to the refrigerated display cabinet and told reporters, "The samples on the day of the incident have been taken for testing."

The picture shows a catering staff showing a sample of the catering to reporters.

Talking about the vomiting and diarrhea of ​​some students in Qicheng Middle School, Ms. Wang was quite puzzled. “The child of another colleague and I were in the experimental school. We delivered the lunch that day. Why is it okay?” Ms. Wang A colleague on the side also said, "The child was waiting for the chicken drumsticks on the 26th meal two days ago!"

The weekly nutritional lunch recipes they provided showed that the weights and prices of the daily meals and ingredients are registered in the register, "the daily meals are not duplicated."

Various rules and regulations can be seen everywhere on the walls of catering spots.

On the food operator's supervision public notice on the outer wall of the first floor, the health certificates of Ms. Wang and other 14 people were displayed.

The reporter's investigation learned that the catering point started operating in October this year.

The above-mentioned two staff members were hired in October and November respectively.

On the evening of November 26, Qicheng Middle School Principal Wang Yong was still busy in his office.

The company involved set up a branch in Fengqiu County in September this year.

In an interview with reporters, the relevant person in charge of the Fengqiu County Market Supervision Bureau said that afterwards, the food business license was not approved due to the unreasonable layout of catering points.

The person in charge also confirmed that the catering point has already started catering during the period when the license was not approved.

"After we grasped the situation, we ordered it to make corrections at that time."

Why is there a "meal before approval" situation?

The person in charge said that according to national regulations, catering must be banned, but at that time the education department signed a catering agreement with the catering company involved through the bidding process. "(The Education Bureau) requires the catering company to start serving meals. , It doesn’t serve meals, students can’t eat.”

"This situation is reasonable, but not legal." The person in charge said, "Shooting to death with a stick does not meet the requirements of the education department." In fact, the catering company was catering and rectifying at the time, and the food business license was approved after the rectification was completed. certificate.

On the evening of November 26, students from Sanming were still being treated at Fengqiu County People's Hospital.

The student said: The meat has a fishy smell and the tofu is rotten

In the eyes of the reporter, the superficial food catering is fairly standard. How about the food delivered?

A catering information registration form shows that dozens of schools, including Nanchanggang Primary School and Zhaogang Town Experimental School, are all companies involved in centralized catering.

During the interview, some schools stated that no students had vomiting and diarrhea after meals, and no students reported any problems with their meals.

He told reporters, "The food can be unpalatable and disgusting."

Xiao Yang, who was also treated in the hospital, was one grade below Xiao Guo. After eating lunch at school on the 23rd, he developed nausea, stomach discomfort, and fever.

He told reporters that the food (the catering company involved) is not as delicious as before, "before the food is cleaner than it is now."

At present, the parents of three students who are still undergoing treatment in the hospital are eager to announce the results of the investigation, "Why do children get sick, we always pretend to be in a boring gourd. As parents, what do you call me think?"

The principal said: After the incident, he reported to each level that he hoped to suspend the catering

On the evening of the 26th, Wang Yong, who hadn't closed his eyes all day and night, was still busy in his office.

He introduced that on the day of the incident, more than 30 students had similar symptoms one after another between half an hour and two hours after lunch. "It is by no means a simple autumn and winter diarrhea."

Wang Yong said that Qicheng Middle School is a boarding school. Previously, it cooperated with a catering company to provide all teachers and students with three meals a day.

Since then, lunch will be distributed by the company involved, and the original cooperative catering company will continue to provide breakfast and dinner.

The reporter visited the school and saw that a two-story building was written with the words “Student Canteen”, and there was a dining table inside. It was divided into a teacher’s window and a student’s window. There were photos of a variety of meals on the top. For the big pot for cooking, obviously there are cooking conditions here.

It is understood that after the nutritious lunch is delivered to the school, the meals are divided among the students here.

Why did you cry bitterly in front of the camera after the incident?

Wang Yong said that after the incident on the 23rd, he reported to the Fengqiu County Education Bureau level by level, and contacted the catering company at the same time, hoping to suspend the catering and wait for the results of the investigation.

But for the next two days, the catering will remain the same.

The catering company responded to him and said everything will be done after the investigation results come out.

In the end, Wang Yong's "a bitter cry" aroused the attention of all parties, and the local officials responded by asking the companies involved to stop catering.

On the 26th, the Fengqiu County Market Supervision Bureau convened a plenary meeting to request further investigations on the sanitary conditions of school canteens and catering places, and food samples in the county.

Guo Zheng, the director of the bureau, told reporters that the sample of the food involved in the incident was tested negative by the disease control department, and further testing will take a few days. "As of now, the results of the examination of three hospitalized students are two gastritis and one pneumonia."

On the 27th, there was an update on this matter.

According to local official sources, it was preliminarily determined that the incident was a food-borne disease incident, and several officials including Wang Niansi, deputy director of the Fengqiu County Education and Sports Bureau, were put on file for investigation.