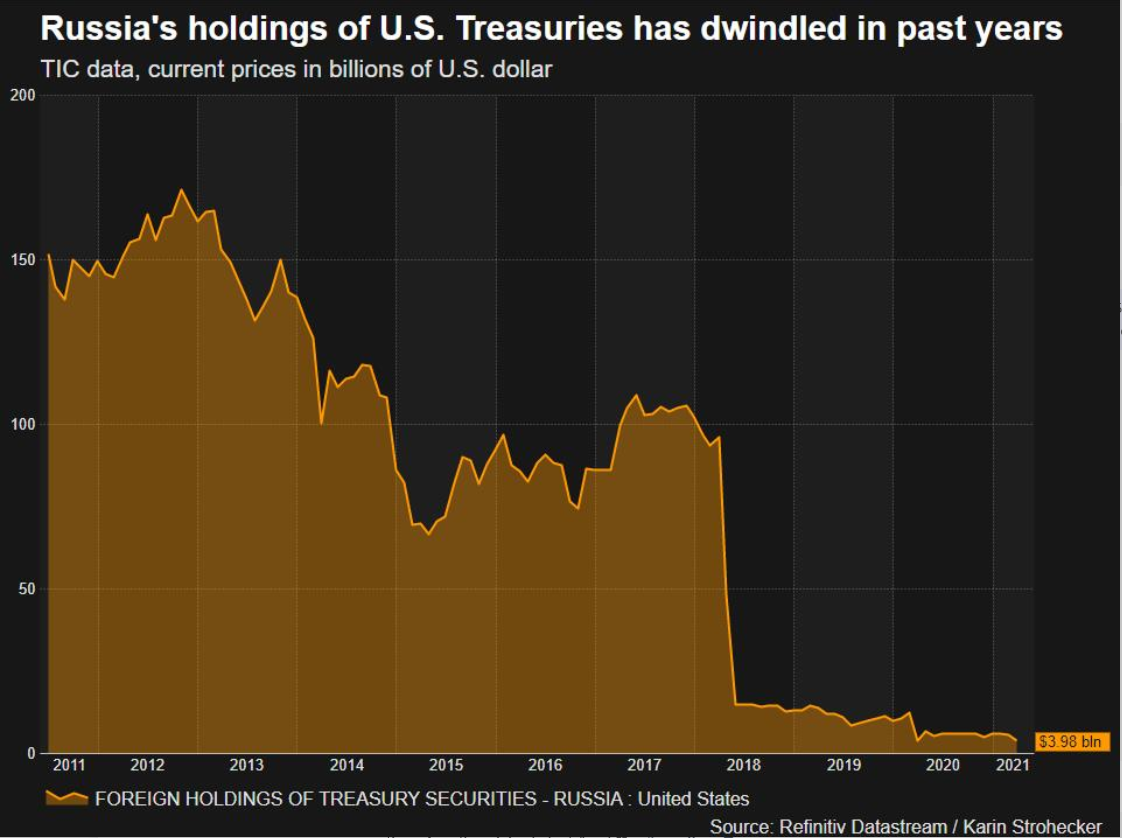 Russia has continued its push for removing the US dollars as payment or reserve, and are now, according to the Minister of Foreign Affairs, Alexander Pankin, considering holding most of their National Wealth Fund (NWF) in digital assets.

The relationship between the Russian government and America has been hanging in the balance for decades, the two nations living on the precipice of the next economic war. There hasn’t been any real economic battle between both countries, but the Russian government is seriously considering the idea of de-dollarization, all thanks to the recent scrutiny of financial deals involving Russian government accounts. The United States has been extra careful in scrutinizing Russian-related business deals in the US. And because every business transaction that involves American companies is subject to America's approval, there have been more negatives than positives with regards to Russian-related deals. And it is getting frustrating.

The deputy minister foreign affairs said that Russia plans to reduce its foreign reserves that are held in US dollars, which accounts for 35% of NWF.

So, before we talk about the prospects of Russia replacing their US dollar reserve with digital assets, it is important to first understand a few terms.

The first one is the National Wealth Fund.

What is the National Wealth Fund (NWF)?

The Russian National Wealth Fund (NWF) is the account where the Russian government stores the excess profits that it gets from oil sale abroad. We can say that the NWF is similar to a savings account for excess profits from barrels of oil sold in the international market.

What Is the Function of The National Wealth Fund (NWF)?

The NATIONAL WEALTH FUND (NWF) helps Russia to stabilize its local currency Ruble should there be some level of volatility in the prices of oil in the international market. Also, with the National Wealth Fund (NWF), the Russian government has money to carry out infrastructure development should there be a need to.

The National Wealth Fund (NWF) is a reserve, so it isn’t usually spent, except when in dire economic situations when there is need for extra cash, and the government doesn’t want to borrow.

Why Is Russia Conducts De-Dollarization and Moving to Digital Assets?

The National Wealth Fund has about $1.86 billion, with 35% of these funds stored in the US dollars. But recently, Russia, through the deputy minister of the Ministry of Foreign Affairs and Russian news outlet, has complained that the American government often gives extra scrutiny, and that there are threats that the US might sanction Russian transactions.

Because every dollar transaction must go through American banks and clearing, there is a high possibility that the sanction threat, which made the rounds in April of 2021, might be implemented. And the Russian government, having suffered a few times with completing transactions due to the transactions being blocked because of suspicious activities, believe it is best to divest.

The move to digital assets, however, should not be swallowed hook, line and sinker.

The Possibilities of NWF Being Held in Digital Assets Exist, But It Might Not Be Enough, Yet

Cryptocurrency traders, investors and enthusiasts will do well to take this latest news from Russia with some level of caution.

The possibility of Russia holding as much as $651 million of its NWF in new digital assets is tempting, but Russia has not been the most welcoming of countries when it comes to cryptocurrencies.

The Russian government, following an investigation into money laundering carried out through Bitcoin, banned some crypto-related activities in the country. Also, several weeks ago, Vladimir Putin, the Russian President, said in an interview that cryptocurrencies were a bit too early to be used for oil transactions.

Now, one might say that he only talked about his scepticism with cryptocurrency being used for oil transactions and that he didn’t say he doesn’t believe in it.

Yes, that is true.

But what is also true is that Vladimir Putin’s body language doesn’t approve so much of bitcoin, especially given the recent activities that linked money launders with cryptocurrency, and how there are fears that bitcoin might cripple the value of the rubble.

What is Next for Russia?

The deputy minister of Foreign Affairs of Russia, Alexsandr Pankin, opined that Russia would, in addition to buying digital cryptocurrency assets with their US dollar reserve, increase its Chinese Yuan holdings, and also its holdings in gold.

When the US Dollar reserves in the NWF is converted to Chinese Yuan, gold and digital assets, the liquid part of the NWF will be mildly affected.

What is the Implication oIf Russia exchanging most of their US dollar NWF reserves to digital Currencies?

It Is foolish to be overly excited about the news because there is no certain date on when these ‘digital assets’ will be bought, or which digital assets will be held. But we can be optimistic that, should it happen that Russia holds a substantial amount of its US Dollar NWF reserve in digital assets, the price of whatever coin Russia decides to buy, will increase.

Also, more than a potential market frenzy, the move will further cement the importance of digital currency in the digitized world. It will, many of us hope, spur other countries to do the same: hold some of their foreign reserves in digital assets.

Hopefully, these ‘new digital assets’ are not the proposed digital currency that the Bank of Russia is proposing. If they are, then, the buzz around the Russian government and digital assets would have been a waste. We shall wait and see!