China News Service, Jiaxing, November 24th (Reporter Shi Zinan) When he decided to post his palm weaving work on Douyin, Zeng Xiuquan took the name of "Brother Caobian" for himself, and the signature on the homepage was "One was delayed by a sweater." Folk artists".   Click on the avatar, and nearly 400 works have been liked more than a million times.   Palm weaving, one of the traditional Chi 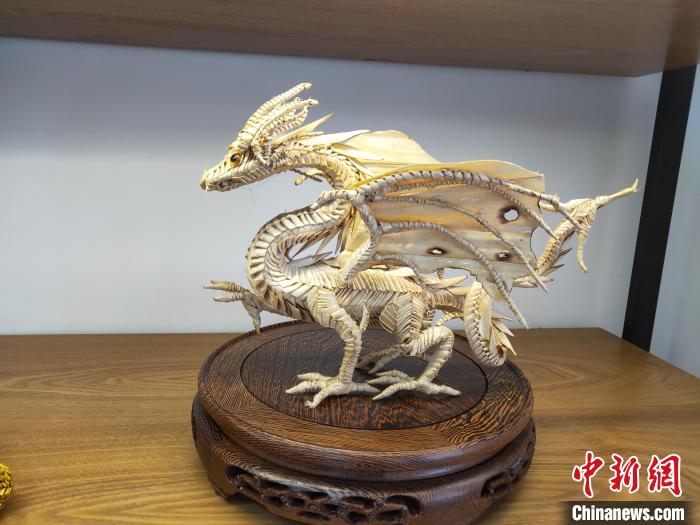 China News Service, Jiaxing, November 24th (Reporter Shi Zinan) When he decided to post his palm weaving work on Douyin, Zeng Xiuquan took the name of "Brother Caobian" for himself, and the signature on the homepage was "One was delayed by a sweater." Folk artists".

Click on the avatar, and nearly 400 works have been liked more than a million times.

Palm weaving, one of the traditional Chinese handicrafts, is woven into handicrafts from palm leaves, which are mainly distributed in Sichuan, Guizhou, Hunan and Jiangnan.

Zeng Xiuquan is from Sichuan. In 2001, his brother came to Honghe Town, Xiuzhou District, Jiaxing City, Zhejiang Province to work, and later started a sweater business.

"When I was young, I followed my grandparents up the mountain, and they often picked some small grasshoppers made of palm leaves for me to play with. Walking in the streets and alleys, there were stalls selling palm weaving." Zeng Xiuquan followed suit because he found it interesting.

In order to make it look like, he always went to the woods of his back mountain to observe the small animals on the spot, sometimes staring at a grasshopper all afternoon.

With the increase of age, the palm series gradually faded out of Zeng Xiuquan's life.

It wasn't until 2008 that a TV show introducing the craftsmanship of brown weaving made him become acquainted with brown weaving again.

It is also this reunion that opened a new chapter in the innovation of folk palm weaving intangible heritage.

"In the past, I just thought it was fun. I didn't expect college questions to be hidden behind the gadgets." After work, Zeng Xiuquan picked up his hobbies again.

"Can you still play like this?" In 2018, Zeng Xiuquan opened Douyin for the first time and saw many craftsmen "show off skills" and teach on it, using the "intangible heritage + video" communication model to try various possibilities.

"In the beginning, I just thought palm editing was very interesting. I wanted more people to know it. I didn't expect that the number of clicks was quite high." After the "Brother Cao" account became popular, Zeng Xiuquan often received private messages from fans to study.

During the exchange, he also slowly figured out the preferences of young people.

Having persisted on Douyin for 4 years, "Brother Straw" already has 319,000 fans.

"Traditional crafts must not only be inherited, but also innovated. I don't want young people to feel that intangible cultural heritage is superior, so how to make crafts have a story, be close to life, and make young people interested is very important." Zeng Xiuquan said.

On the basis of preserving the original skills, he continued to innovate in creative themes, and created allegorical scene-based brown weaving works and cartoon brown weaving figures.

The novel form and clever creativity are really sought after and loved by many young netizens.

In this era of booming Internet video socialization, many intangible cultural artisans like Zeng Xiuquan have chosen to register accounts on short video or live broadcast platforms, and put their craftsmanship on the Internet to attract more people and young people’s preferences. focus on.

"If it can be organically integrated with other fields, the value of intangible cultural heritage will be higher and the market will be bigger." Because of a whim, Zeng Xiuquan also incorporated palm knitting into his sweater business.

In his view, the super-large collection QR code woven with sweater straps in the store is an innovation, a perfect fusion of traditional techniques and modern technology.

Nowadays, Zeng Xiuquan has continuously integrated the elements of brown knitting into the design of sweaters, and began to consider "live-streaming goods." Offline, he also cooperated with the local government to open brown knitting training courses and participate in activities such as "intangible cultural heritage on campus".