Chongqing "Bangbang", who has carried out a house in ten years, now switches to takeaway "infantry"

Due to its special geography, Chongqing has given birth to a special group-"Bangbang Army". They leaned on a "stick" and legs, climbed up the ridge, carried heavy loads, and worked hard to live by carrying goods.   Ran Guanghui, known as "The First Brother of Chaotianmen", is a member of the "BonBon Army". This is famous for his "father and son photos", "a house in ten years", and was reported 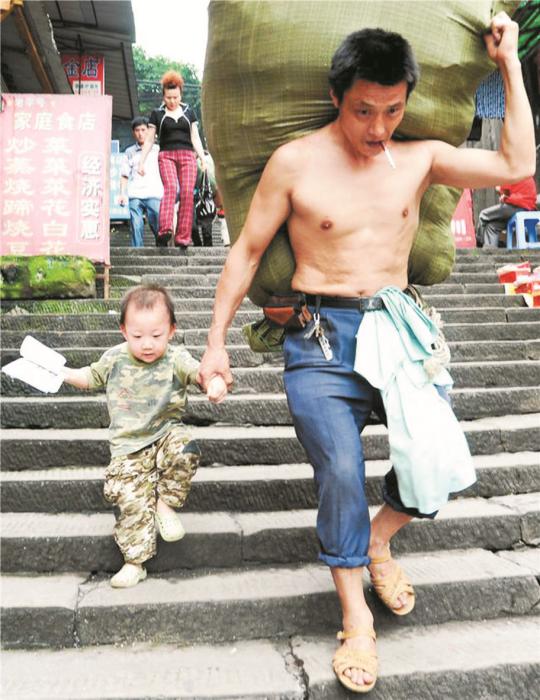 Due to its special geography, Chongqing has given birth to a special group-"Bangbang Army".

They leaned on a "stick" and legs, climbed up the ridge, carried heavy loads, and worked hard to live by carrying goods.

Ran Guanghui, known as "The First Brother of Chaotianmen", is a member of the "BonBon Army". This is famous for his "father and son photos", "a house in ten years", and was reported by the People's Daily and many other media. The “non-famous” and “Bangbang” in Chongqing that have been in the past have also “transformed” in the era when the Internet is sweeping life. He has just joined the ranks of “Elemy?” takeaway.

To this end, he also followed the post-95 takeaway brother as a teacher, and humbly learned how to "transform" to become a qualified takeaway.

Ran Guanghui and his son taken ten years ago

The well-known "Bangbang" refuses to bring the goods live, and strives to make money

"After the'Double 11', it is the off-season, so we should find some ways..." Ran Guanghui, who has been a "Bangbang" in Chaotianmen for more than ten years, knows the seasons of this industry well.

I have just experienced winter clothes and new ones. Those two weeks are considered the busiest days of the year and the best days for business. I can earn 600 or 700 yuan a day at most.

However, the business of "Bangbang" will be the same as the current weather, and it will gradually enter the cold winter.

"Until the Spring Festival, the clothing business will be relatively weak, coupled with the impact of the new crown pneumonia epidemic, the need for us to be'sticky' will be reduced a lot."

As for how to spend the off-season, Master Ran has the same anxiety as other "Bangbang".

My son's third year of righteous thoughts, all kinds of expenses have increased.

In order to provide for his son’s education, repay the mortgage, and create better living conditions for the family, in addition to using "Bang Bang" to move goods, Master Ran takes almost all physical tasks-removing dross, moving, and delivering furniture... "As long as someone shouts When it comes to me, no matter how much money is, I’m willing to do it! I’ll be back when I run out of strength..."

Master Ran is well-known in the Chaotianmen area for enduring hardship, and for this he has also won the praise of "the first brother of Chaotianmen".

Because the "Ten Years of Father and Son Photo" became popular throughout the country, he was "surrounded" by hundreds of domestic media, including "People's Daily" and CCTV.

After becoming famous, some people once asked Master Ran to promote clothing products, and some people came to the door and hoped that he would start a live broadcast to bring the goods.

"I know I'm not that piece of material, and eating with strength is the right way." Master Ran hardly hesitated, and turned away those businesses that offered attractive remuneration.

In his opinion, although it is currently in the "bitter winter", it is most practical to carry the "stick" on the ground, and the money earned with both hands is the most practical.

Become a takeaway "infantry" as a teacher

However, Ran Guanghui has moved a little other thought recently.

He found that there were more and more takeaway boys around him, and his income seemed to be good.

In a small chat, Chaotianmen merchants told him that in addition to "riders", there is also a takeaway job called "infantry": "You can use your mobile phone to get close to each other at any time. You don't need to ride a motorcycle, climb hills, or walk. Delivery, very similar to yours!"

Due to the special terrain of Chongqing, in addition to the common take-out "cavalry" who use battery vehicles to transport, there are also a group of "infantry" who run on their legs to deliver meals.

After knowing this, Master Ran thought to himself, what I have is strength. Why can't I deliver food like everyone else when I have little business?

So he asked his family to help him download the app and apply to become a takeaway "infantry."

Ran Guanghui's application was quickly approved. The platform also sent He Huayun, a post-95s boy, to Ran Guanghui as a "master" and led him to get started.

"I just ran a business with Master Ran and saw him carry 300 kilograms of goods up to the fourth floor in one breath. I admire him a lot!" Xiao He didn't know much about "Bangbang" before.

Although he is only half the age of Master Ran, he is already a "master" in the food delivery industry.

Xiao He's advice to the "disciples" is simple: first, pay attention to safety and obey the traffic rules; second, take orders according to your ability. If you find it is too late, don't take them.

"There is no shortcut in our business. It is to deliver meals to customers quickly, accurately and safely."

Ran Guanghui and "Master" He Huayun

The first order Ran Guanghui took was to deliver two boxes of mineral water and a few packages of daily necessities from Chaotianmen to Baixiangju.

The distance of 1.1 kilometers is not a problem for him.

I took an order from the supermarket, about 20 kilograms of goods, Ran Guanghui put them on "Bangbang", picked them up and left.

Seeing that Ran Guanghui was not very proficient in receiving orders from mobile phones, Xiao He simply shut down his order system and followed Master Ran all the way to help him operate.

51-year-old Ran Guanghui walked ahead with a quick and steady pace, but He Huayun still couldn't keep up.

Master Ran couldn't be more familiar with the topography of Chaotianmen area.

No need to watch the navigation, after more than ten minutes, the goods were delivered to the residents of Baixiangju.

He clicked "Confirm" and the first delivery was delivered smoothly.

"Twenty catties of goods is too easy." Ran Guanghui said, feeling that it is easier to deliver food than to carry a "bangbang". Later, he can take advantage of the original business to take more orders on the food delivery platform.

He said, whether it’s good to run takeaways or use "Bangbang" to carry goods, "As long as you can endure hardship, you can find money! It can win everyone’s respect!" Now, for him, there is just one more thing that can be used. It's a "sticky" platform.

"Bangbang" transformation is both simple and difficult

Even without the photo that made him famous, Master Ran would still be the most popular "Bangbang" in Chaotianmen market.

365 days a year, except for the half-month of the Spring Festival shopping mall holiday, he has 350 days to pick up and deliver goods.

In the Internet age, for Ran Guanghui, transformation is both simple and difficult.

The simple thing is that the original labor habits remain unchanged.

The difficulty is to learn and familiarize yourself with the process of online activity.

According to the data of "Hungry?", the number of "infantry" in Chongqing ranks first among cities in the country.

"Some sites have more than a dozen'infantry'." According to the relevant person in charge of Chongqing "Are you hungry", it is not convenient to park and ride bicycles in many commercial districts in Chongqing, but there are usually many short-distance food orders. , So there is a targeted arrangement of "infantry"-they usually rely on walking to pick up and deliver meals, most of which are orders with a delivery range of about 1 kilometer.

"Hopefully, under the leadership of Master Ran, more "Bangbang" will join the Internet food delivery industry. With this flexible employment method, "Bangbang" can be used in the off-season (from November to the following year each year). January) Continue to work hard for life."