Tracking: Why do illegal social organizations play the "national" brand and pull the "cultural" flag?

"People's Literary Artists Association" sells membership qualification for 580 yuan" tracking Why do illegal social organizations play the "national" brand and pull the "cultural" flag? Industry: Put on a tall coat and use the vanity of the participants to fight the information gap   On November 14, a reporter from the Beijing Youth Daily reported on the public activities of the People’s Artist 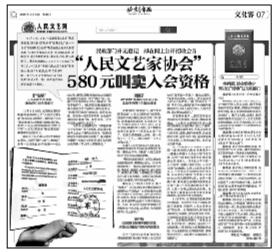 Why do illegal social organizations play the "national" brand and pull the "cultural" flag?

Industry: Put on a tall coat and use the vanity of the participants to fight the information gap

At the same time, a reporter from Beiqing Daily combed and counted the six batches of 61 suspected illegal social organizations announced by the Ministry of Civil Affairs from February to November 2021 and found that 55 illegal societies start with the word "national" (including China and International). Organization: 26 organizations have the word "culture" (including literature and art) in the name of the organization.

Make a lot of money

Why do these illegal social organizations like to play the "national" brand and the "cultural" flag?

Wang Wenying, deputy dean of the Central Academy of Painting and Calligraphy of the Jiu San Society and a researcher of the National Academy of Painting of China, believes that many cottage associations like to use the word "national" to target some people's desire for vanity in order to profit.

"Regular literary and art associations, such as the Chinese Calligraphers Association and the Chinese Artists Association, have high entry barriers, and some are brave and brazen, vain, and so-called literary enthusiasts who want to take advantage of the opportunity to make a profit. The association uses this to raise its value."

Columnist and veteran cultural commentator Han Haoyue told the Beijing Youth Daily that illegal social organizations took advantage of the "national" first name and the advantage of being registered in Beijing to engage in conference award fraud. This has been around for a long time and should be strictly controlled. .

At the same time, he believes that illegal social organizations pull the "cultural" banner in order to put a lofty coat on themselves and create a false appearance for the outside world to support such activities at the national level.

"Of course I think the reason why so many people are deceived is that the number of grassroots fans who love literature, art, calligraphy and painting is huge; secondly, awards have always been sacred by the people. Even if there is doubt, the deceived generally dare not or Don't want to say anything." Han Haoyue believes that the logic behind this is actually very simple: it is to use the vanity of the participants to fight the information gap and make "small profits and big profits".

Similar cases can be described everywhere.

For example, on the eve of the World Book Day on April 23 this year, the Chinese Reading Federation is on the list of the third batch of suspected illegal social organizations announced by the Ministry of Civil Affairs.

The association claims to be a “responder to the National Reading Strategy and a promoter of the National Reading Project” and organizes or organizes various competitions in the name of “Reading”, such as the “Chinese Reading Competition” and the “Modern Reading Art Model Reading Instructor” Profits such as "National Trials" have been listed as suspected illegal social organizations by the Ministry of Civil Affairs.

How to reverse this chaos in the cultural market?

Han Haoyue suggested: First of all, we must strictly review the associations and organizations including the initials of the country, including their funding sources, office space, leading institutions, etc., and all these information materials need to be clear; secondly, they must be in the legal evaluation of awards and certificates. In between, draw a clear line to eliminate profitable awards and awards; third, to punish organizers who illegally collect money for cultural activities on the charge of "fraud", and give adequate deterrence from the legal level.

At the same time, popularize common sense of anti-fraud to the majority of literary and art enthusiasts, so that everyone has the concept that "any award or certificate bought with money is a scam", making it difficult for scammers to succeed.